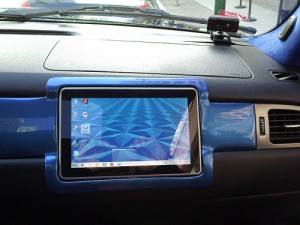 While some of you were (and perhaps still are) waiting for your HP Slate 500 to arrive, one made an appearance in a custom GMC Yukon Denali by West Coast Customs at the opening of the HP Store in Vancouver, Canada on December 3rd 2010.

The photographer shares their photos on Flickr. Most are of the vehicle, but this one shows the Slate in action, or rather in inaction. Doesn’t look like it does anything other than being an HP Slate 500 embedded in a dashboard. Meanwhile, the back of the Denali is loaded with monitors. Don’t think those do anything either, but it looks cooler than a tablet taped into a dashboard (kidding, the custom mounting looks cheesy in the small photo, but it’s impressive up close in the large photo). The rest of the car is decked out with the HP logo.

BTW, congrats to Vancouver on getting an HP Store. Only ones I’ve seen in the States are in-store stores and kiosks.

Via Engadget and West Coast Customs