Over the weekend, Motorola updated its Ice Cream Sandwich update timeline to reflect the latest information the company has in regards to the ICS updates for various devices.

The change saw the Droid Bionic Ice Cream Sandwich update postponed until Q4 and the Droid Xyboard 8.2 ICS update delayed until O4 as well. Both updates were originally supposed to be out in the third quarter but now will be out sometime in October, November or December. 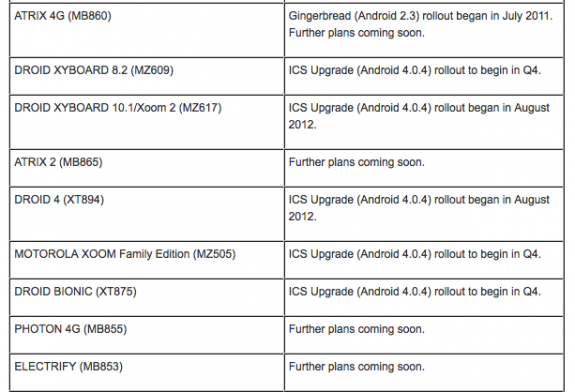 The Atrix, Atrix 2, and Photon 4G ICS updates could be in jeopardy.

In addition to the news regarding the Droid Xyboard 8.2 update and the Droid Bionic ICS delay, owners of Motorola’s Photon 4G, and Atrix 4G and Atrix 2 all got updates as well, though, the news is much more grim.

Instead of offering a date for the Ice Cream Sandwich updates for those devices, Motorola instead says that “further plans” are coming soon for owners.

Originally, the Atrix and Atrix 2 were to get Ice Cream Sandwich in Q3, which includes July, August and September, while the Photon 4G was slated to get ICS in Q4 of this year.

All three devices now are listed with the moniker “Further plans coming soon.”

What this means for the trio of devices is unclear. It’s possible that they will get dates attached to them in the future though we don’t understand why Motorola wouldn’t have just done that over the weekend.

However, it’s also possible that we may see a delay into 2013 or worse yet, cancellations. Motorola has had trouble with some of its devices and Ice Cream Sandwich, the Droid RAZR MAXX and Droid RAZR in particular, and it’s possible that Motorola had to go back to the drawing board because of those issues.

Hopefully, the company issues some updates soon because for now, Atrix, Atrix 4G and Photon 4G owners are going to have to live in limbo.