The built-in iOS calendar app offers only the basics for handling a person’s schedule, so we went looking for the best replacement calendar apps for iPhone and iPad.

The six calendar apps include some that work only on the iPhone while others run natively on both the iPhone and iPad. We believe any of these 6 apps will better serve users better than the Calendar app that Apple provides. 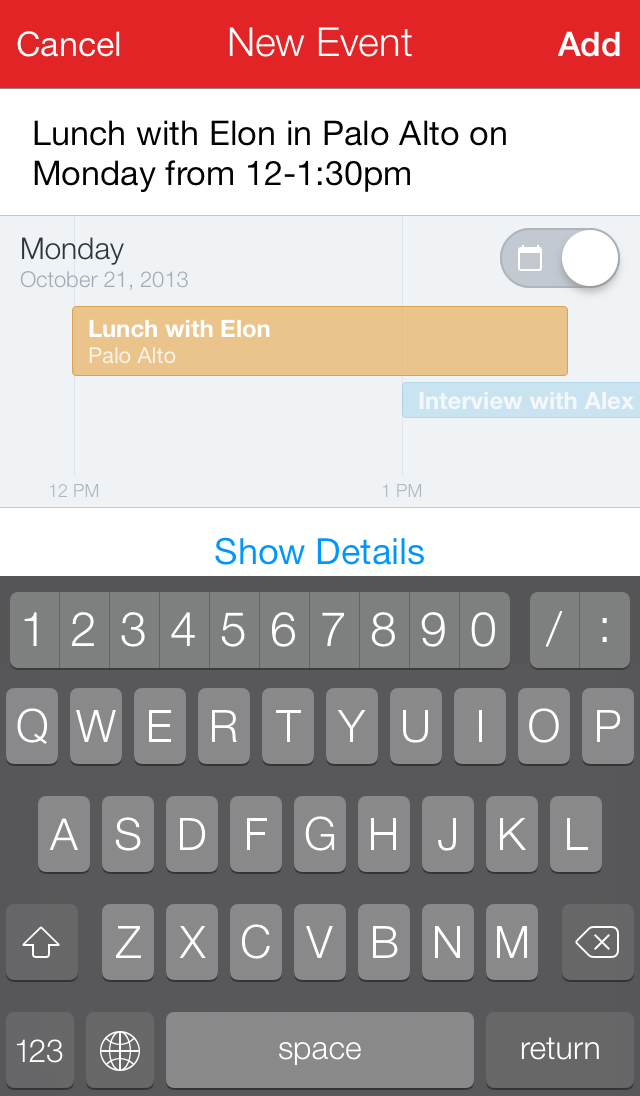 This great app does one thing better than all the others. Fantastical 2 creates an appointment by typing in natural language. Instead of tapping a bunch of buttons to add an appointment, type or speak using the mic on an iOS keyboard. For example, one might write or say, “Lunch with Barb at noon on Saturday at El Portal in Morganton.” The app automatically takes the name of the appointment, “Lunch with Barb” and creates it. The noon time gets added as well as the date. Fantastical 2 adds the place too. The app syncs in real-time with the calendars set up in iOS.

Fantastical 2 displays information in a simple easy to use user interface. Pull down to switch between Day, Week and Month views as well as an Agenda list of appointments in chronological order with Reminders mixed in based on their date/time.

We recommended the first version and it’s Mac cousin and still love it for both iPhone and Mac. We just wish Flexbits would code a version that ran natively on the iPad instead of just the blown up iPhone version. 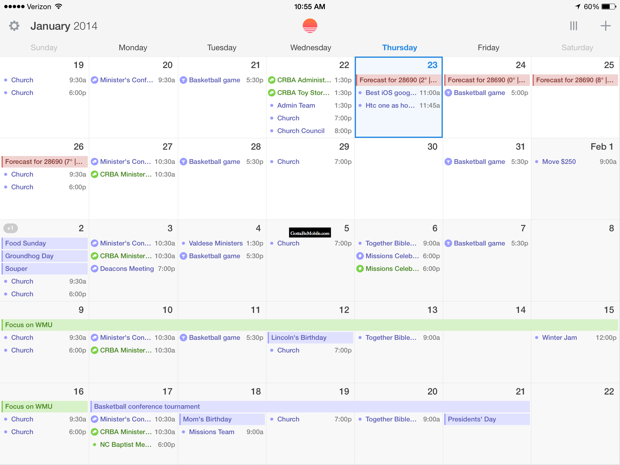 Sunrise Calendar isn’t just a pretty face. It also makes data entry and editing simpler. Tap an appointment and a box flies out to the side to view the details. Then edit them as needed. To add an appointment hit the plus button in the upper right and enter the details.

Sunrise doesn’t do live syncing with Google calendar very well. I added an appointment and it took some time before it showed up on my computer calendar. It also doesn’t let users enter natural language details like Fantastical 2 unless the user does a long press on the plus button. That only works on the iPhone version, but we assume it will show up on the iPad soon. We like the free price and the look of Sunrise though. We also like the simple event editing features making this a nice choice if Fantastical 2 doesn’t appeal to users.

Be warned that it asks for an Apple ID, which will make some nervous. People who don’t plan to use iCloud’s calendar won’t worry about this. It does require a Google ID to use with Google Calendar. 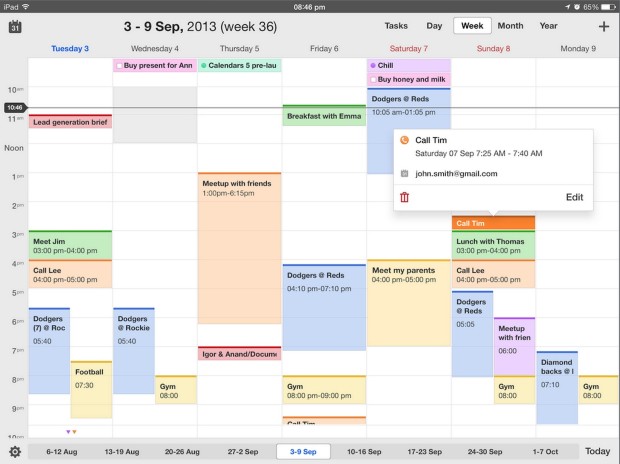 Readdle makes another beautiful and functional Calendar replacement. Calendars 5 works well with both appointments and reminders. It lets users input information using the same kind of natural language that Fantastical 2 offers, but comes with the added benefit of running natively on iPad as well as iPhone.

Tap a date in Month view and it takes the user to that day. There’s a column on the left third of the screen showing appointments from the week after the date. The day’s agenda takes up the right two-thirds of the screen. 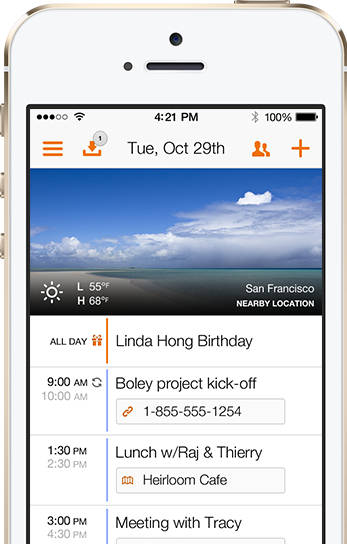 Tempo does one thing really well. It integrates the calendar, email, contacts and maps to create a solution for busy people who attend a lot of meetings and want to manage all the data in one app. It’s overkill for many of us, but people who send and receive a lot of meeting appointment requests via email and meet with people will love Tempo.

We only wish we didn’t need to create an account with Tempo. For the right people, it’s worth it. 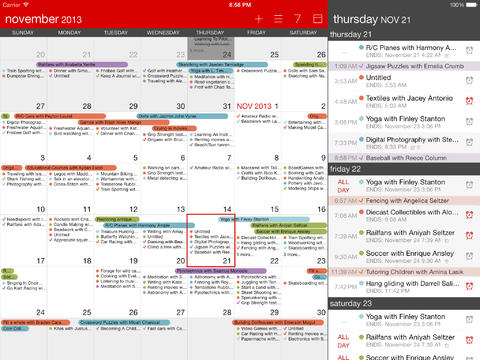 While Temp works best for people in an enterprise situation or for people who make a lots of appointments with others, Calvetica Calendar takes a simpler approach. It looks better than the iOS Calendar app and makes it simple to work with a light or busy schedule.

We like that Calvetica Calendar uses the built-in calendar system in iOS so there’s no need to enter account info. It syncs reliably and quickly with the iOS calendars. We also love the month view which shows a day’s agenda along the side when the user highlights it in month view. 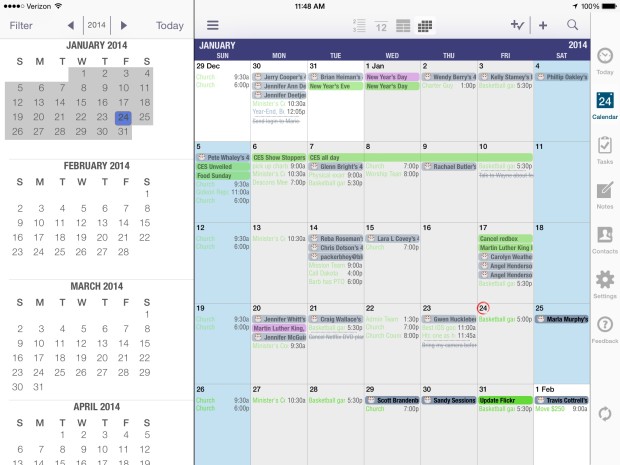 Pocket Informant gives users a digital day timer. It handles the calendar and reminders or to do lists just fine. It adds note taking to help a person stay organized all in one place like we used to do with paper day timers. The old ugly version used to use a skeuomorphic look, but they went with the iOS 7 design theory and made it look more modern and flat.

The various parts of the app sit along the right side. A view for each class of information shows itself when the user taps the tabs. There’s a summary view, calendar, tasks, notes and contacts.

The app could stand a few improvements, like inking options in the note taking section. It’s also the most expensive in our roundup. However, we like that we get an option for those who like all of their personal information management in one app and it syncs with a web version, useful for people who want to use their data on another person’s computer.