Upgrading gadgets can get expensive, but one lucky iPhone buyer won’t have to worry about his or her gadget budget for quite a while. Gazelle, a company that buys used gadgets, is offering a million dollar prize in a contest dubbed the Become a Gazellionaire Sweepstakes.

Gazelle’s buy-back service is pretty painless. Wiith just a few clicks, users can find out how much their old devices are worth and lock in a price before they buy a new one. Sellers have 30 days to send in their used iPhones and other gadgets to Gazelle. The company’s extended iPhone price locks to October 15 to allow people a little extra time to acquire an iPhone 5C or iPhone 5S.

The sweepstakes is open to United States residents now and runs through the end of the year. A winner will be announced in February. Consumers can enter the contest multiple times. Each transaction you have with Gazelle between now and the end of the year will automatically enter you in the contest. Facebook users can enter on Gazelle’s Facebook page and can earn additional entries by sharing with friends. 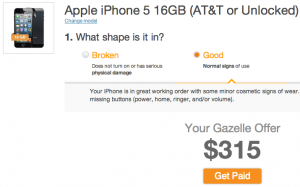 Those looking to sell their old iPhones should act fast to lock in a price as used iPhone values nose dive once new models start selling. As of today, Gazelle is offering $330 for the 16GB AT&T iPhone 5 in good condition and $200 for the 16GB iPhone 4S.

The contest’s fine print is below:

NO PURCHASE NECESSARY. The Become a Gazellionaire Sweepstakes starts on 9/9/13 at 12 a.m. (midnight) ET and ends on 12/31/13 at 11:59:59 PM ET. Visit Gazelle.com/sweeps for Official Rules and complete details on how to register, entry instructions, including how to enter without a transaction, odds of winning, etc. Open only to legal residents of the 50 U.S./D.C., 18 years or older. Void in Puerto Rico and where prohibited or restricted by law. Sponsor: Gazelle, Inc.

Apple’s new iPhone 5S features improved cameras, a faster processor and Touch ID, a  scanner that allows users to log into their iPhones and make purchases with their fingerprints. The iPhone 5C is a more affordable iPhone that starts at $99. The cheaper model is made of plastic and available in several colors. The iPhone 5C will be available for pre-order starting September 13. Apple will not be taking pre-orders for the iPhone 5S. Both will sold at Apple stores and wireless retailers beginning September 20. This is the first time all four major U.S. carriers are selling iPhones models as Apple launches them.