Installing these apps and watch faces is as easy as installing an Android app. Head over to the Google Play Store on the paired phone or even on a computer and check out the page Google set up for some of the best Android Wear devices and apps. It advertises the watches people can buy and shows some of the top apps. 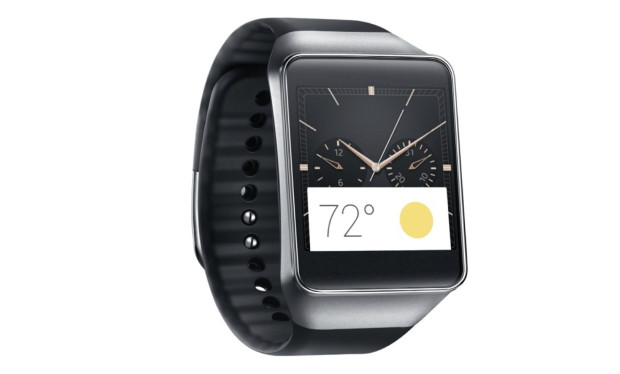 The faces installed on the Android Wear watches look nice enough, but the others available in the store often look better or offer functions not included in the pre-installed faces. Choosing a watch face is a matter of taste primarily, but also function. 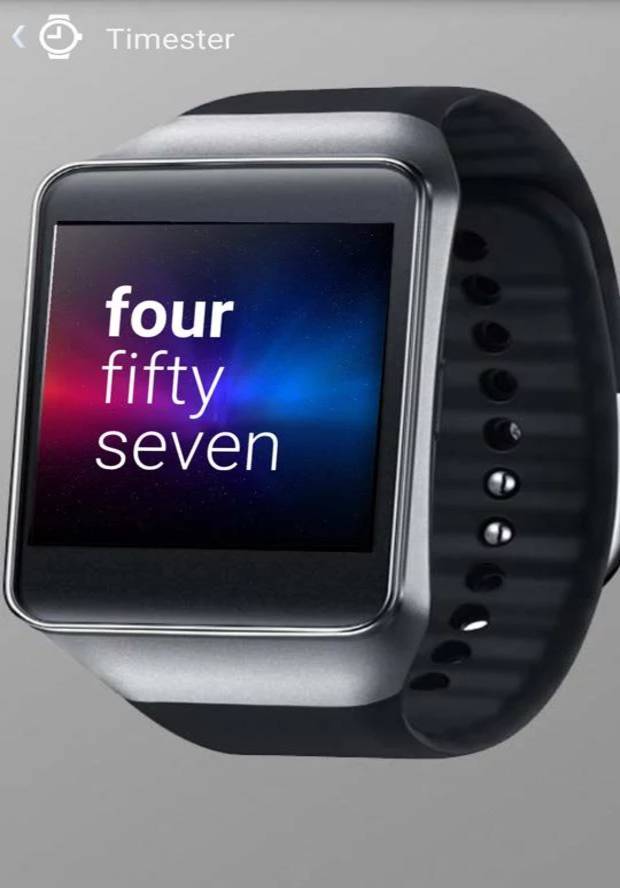 The Android Wear Beautiful Watches downloads for free, but includes in-app purchases that unlock some of the watch faces. The app includes 10 faces that work on either the square LG G Watch or Samsung Gear Live and will work on the Moto 360’s round face. 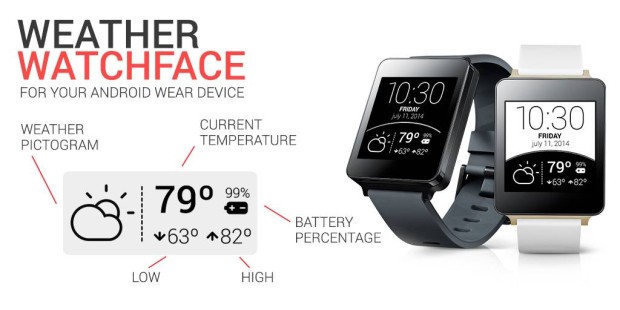 Use it for free or unlock some of the features through an in-app purchase. 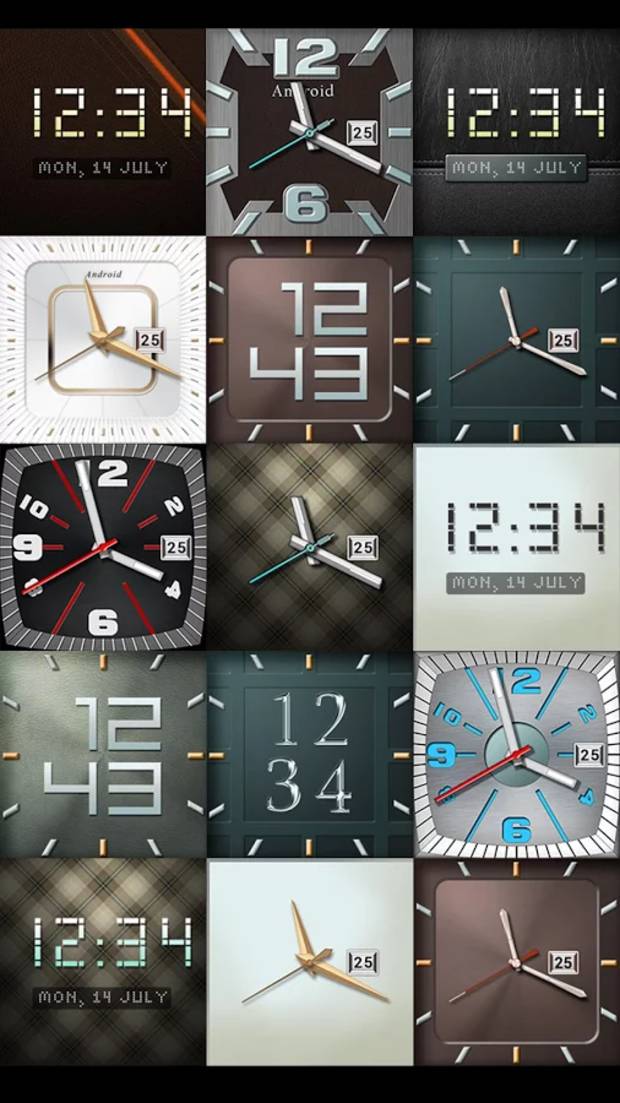 Possibly the prettiest watch face collection comes from Wear Face Collection. It’s another free watch face app with in-app purchases. The faces included for free look great, but for a few bucks one can unlock the best watch faces to really make the Gear Life, G Watch for Moto 360 look like jewelry.

Android Wear offers some usefulness right out of the box, once the wearer connects it to their Android phone. However, apps extend that usefulness and really make the platform shine. These apps let the user carry out things on their watch and help the users interact with their phone.

Before sharing the apps, let’s start by talking about the apps we won’t include. 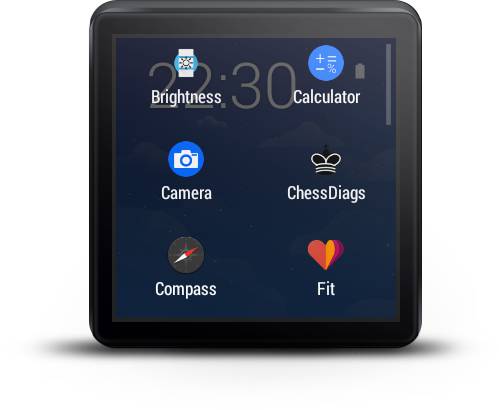 Most apps work, thanks to the voice commands built into Android Wear or Google Now. After people install a lot of apps, they may forget what’s available on their watch. The free Wear Mini Launcher fixes the problem. Install it and swipe from the edge of the screen to show a two-column grid of tiny icons that shows what apps work with the watch. Tap an icon to launch that app. It’s the app launcher that Google should have included in the OS from the start. 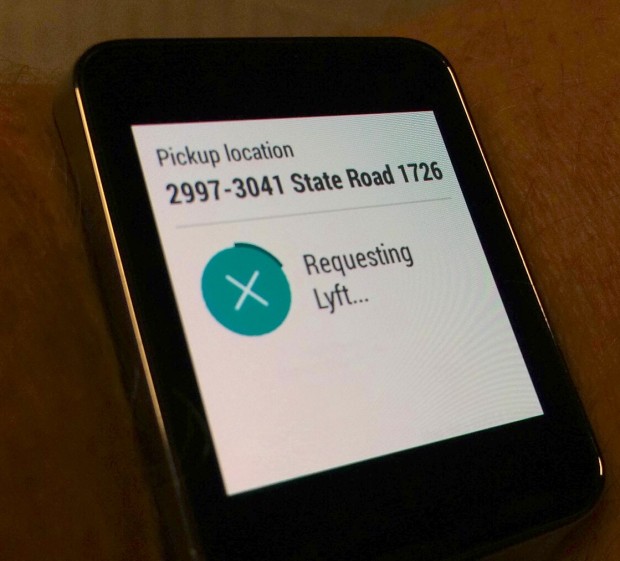 Lyft lets people call for a ride from their Android phone, and now the watch. It’s like a crowd sourced taxi service. Many of us can’t use Lyft since the service isn’t available in our town, but residents in 67 cities in the US can now call for a ride from Lyft drivers right from their wrist. It’s not just in the biggest cities like New York, LA or San Francisco. For example, Charlotte, NC, just down the road from me, has Lyft drivers. The service contacts them and the user pays by credit card through Lyft so no money changes hands. 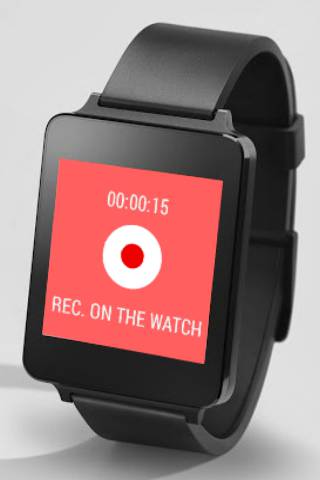 Some people’s jobs require that they turn in a mileage log to get reimbursed for driving done for work. The simple Audio Recorder app for Android also works with Android Wear to let users record voice memos, like the the date, destination and beginning/ending mileage for a work mileage reimbursement or tax records by speaking into the watch app. It then transfers the recording to the watch. Use it for recording any audio needed. The app then transfers the recording to the phone. 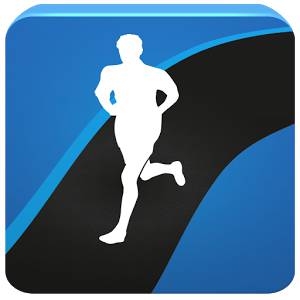 People like their Fitbit or other health and fitness wearable devices, but Android Wear watch owners can use apps like Runtastic Running & Fitness to do the similar things. The primary purpose of the app is to track a person’s run, walk or bike route. The service will keep a diary of this information using the phone’s GPS. Android Wear users can start their workout through the watch without pulling their phone out. 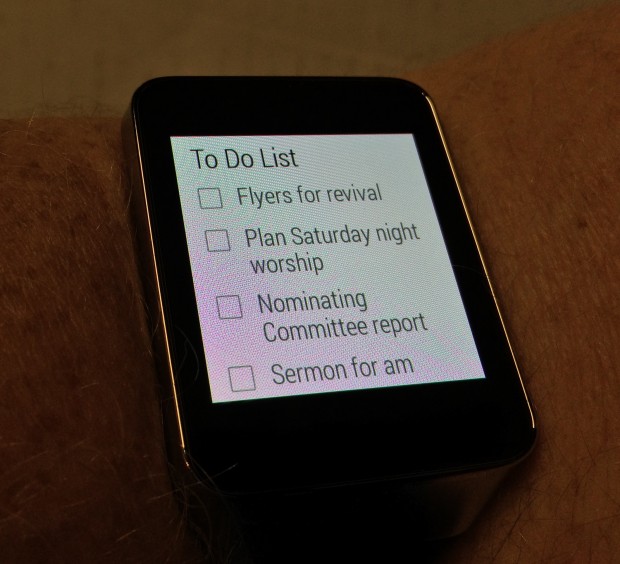 Android phones usually don’t come with the free Google Keep app preinstalled, but users should get Keep because it’s so simple and useful. Even though I’m an Evernote  user (which also works with Android Wear), Google Keep holds my To Do list. On the watch users can see their notes, shopping lists, To Do lists and anything else their Keep app will hold. 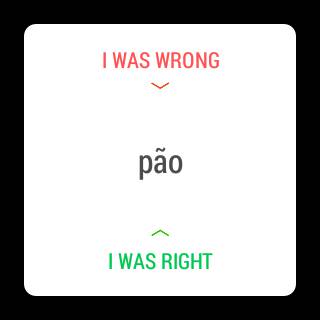 Want to learn some Spanish for an upcoming trip to Mexico? Duolingo (free) lets language students learn from their phone, and now an Android Wear watch. The app shows a word in one language and then gives the user a few moments to think of the translation. Then it shows the screen above. Swipe down from the top if the answer’s wrong or up from the bottom for correction translations. The test process helps the user learn vocabulary quickly and simply. 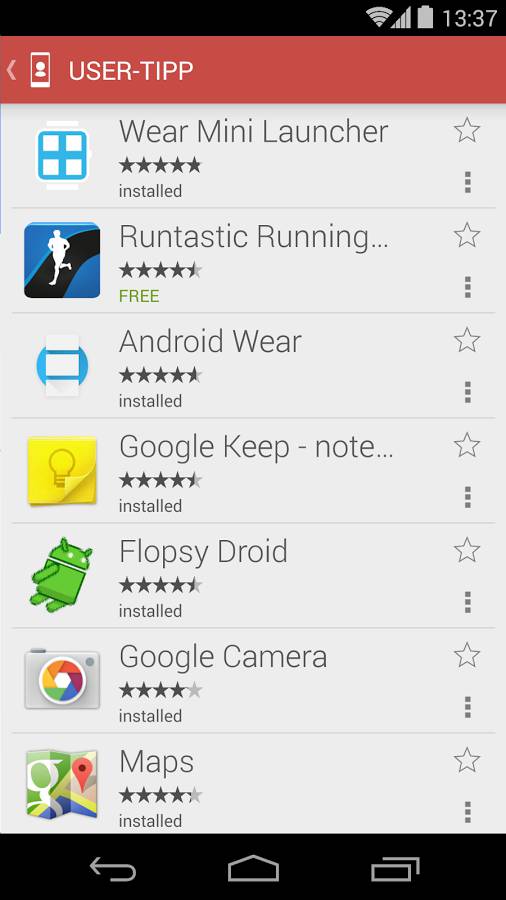 The apps that work with Android Wear don’t have their own special section in the Google Play Store list of categories like they should. The Google Play Store staff picked a few of the more popular apps and linked to them from a section shown on the main store page, which also shows what watches buyers can get. That’s where the Wear Store for Android Wear (free) comes in. The app developer curates the apps that show up in the store that work with Android Wear. It shows sections like apps, games, news, dev’s choice, user’s choice and watch faces. In the section labelled apps we get categories for books, education, lifestyle, news and more. In the upper right corner there’s a blue icon with the white number inside the box. Tap it to show a list of the new or recently updated Android Wear apps. Tap on the app name from the list and the Wear Store for Android Wear shows the Google Play Store page with a link to the store page itself. Tap it and open the store to install the app on the phone and watch. It also shows whether or not a user already installed that app.