As if we need more proof that the iPhone 6 release date is less than a month away a new leak shows off the iPhone 6 design in stunning detail. Unlike the iPhone 6 vs iPhone 5s comparisons we share with mock ups made in China this is allegedly the first time the real iPhone 6 back and front are photographed together.

Unlike the mock ups and earlier leaks we get a very detailed look at the new iPhone 6 design as it will very likely look when you pick it p from a store on the iPhone 6 release date in September.

A high-end iPhone vendor shared photos on several iPhone 6 photos that show off the new iPhone 6 design in stunning detail. Let’s take a closer look at the leak which the company claims shows an iPhone 6 screen setting inside the iPhone 6 back.

An assembled iPhone 6 front and back offers a great look at iPhone 6 design details.

The timing is right for these to be real parts, as we’ve already seen several leaks show off individual parts and with an iPhone 6 event rumored less than three weeks away and an iPhone 6 release in a month, Apple needs to be working hard to prepare the new iPhone for the release.

Feldvolk shared this first photo on Instagram, showing off the bottom edge of an iPhone 6, which matches up with the rough shape of our iPhone 6 mock-up and rumors. In another photo we see the top edge of the iPhone 6, which is smooth with no power button. Additional photos appear on MacRumors.

A side shot shows a slim iPhone 6 design.

These alleged iPhone 6 photos show a stunning level of detail and with the iPhone 6 assembled, at least partially, we get to see more about the overall look of the new iPhone. Here are the important observations about the iPhone 6 design.

Keep in mind this is not a finished iPhone 6, but parts leaked or smuggled out of factories. There are signs of wear on the parts and though the fit is better than on iPhone 6 mock ups, we will likely see an even more appealing look on the iPhone 6 appeal unveils on September 9th. 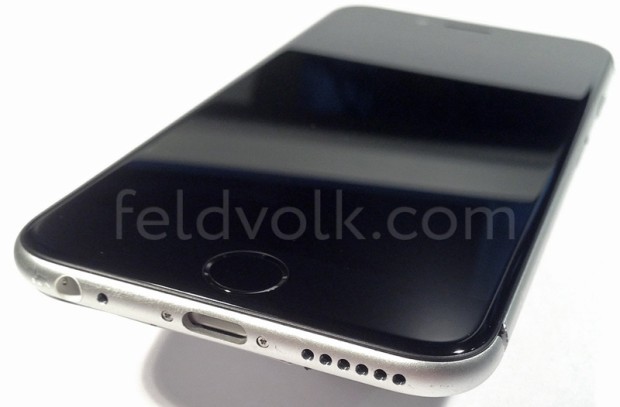 This iPhone 6 photo shows an assembled iPhone and hints at different colors for the bands on the back of the phone.

The Wall Street Journal and Re/Code both claim Apple plans to hold an event on September 9th to announce the new iPhone. You can expect to see this iPhone 6 event invite go live on September 3rd, which is the date Samsung announces the Galaxy Note 4. Apple routinely sends the invite for a fall iPhone event out right as Samsung announces the new Galaxy Note to steal some attention away from the competitor.

With an event in the books we should see a iOS 8 release date about a week later on September 17th and the iPhone 6 release date on September 19th. That is a Friday, and many stores will likely open early for the event. It remains unclear if Apple plans to offer iPhone 6 pre-orders, after halting the practice in 2013. The company may skip them again to drive more traffic to retail stores.