The Microsoft Surface Pro 3 gives owners a versatile 2-in-1 device that they can use as a large 12-inch tablet or a nice Windows 8.1 laptop. With the new Surface Docking Station, it even replaces a desktop system as well.

For as little as $800 a buyer can enjoy the Surface Pro 3. But to really get the most out of the device, follow these tips. Some will apply to all Windows 8.1 devices, while others work only on the Microsoft Surface Pro 3.

We used to close Windows software by clicking the red X in the upper right corner. There’s no red X to close the app in Metro UI apps. Microsoft wants us to let the OS handle this, but this leaves apps running in the background and taking up memory. Many users want control over this. If they set the Surface Pro 3 Settings to show these apps on their Desktop Taskbar, the Taskbar gets crowded.

While in a Metro UI app, move the mouse cursor to the top of the screen using a mouse, the Type Cover trackpad or a finger. Press, or click and hold in the top edge of the app, and drag to the bottom of the screen and release. This hides the app so it won’t show up on the taskbar in Desktop mode. It’s still running. This hides it to get it out of the way, but the state of the app gets saved so the user can return to that place in the app later by opening it from the Start screen.

To totally close the app, see the video above or follow these steps. Click, or tap at the top and hold down, while sliding the app down to the bottom of the screen. Hold it there until the app flips over and briefly shows the app’s Start screen tile image before disappearing. The key to make this, and the above tip, work is to hold the cursor in place until the visual clue shows up.

Keep Metro Apps Off the Taskbar

Some users may not want any Metro UI apps on the Desktop Taskbar ever. Windows 8.1 lets them turn this off in Settings. Swipe in from the right side and choose Settings. Then tap Change PC settings. Tap Corners and edges. 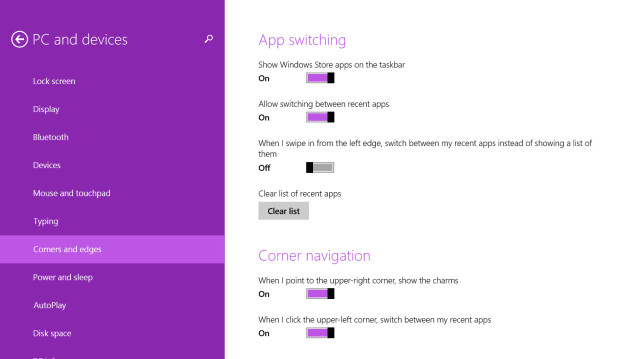 Turn off the first item that reads Show Windows Store apps on the taskbar.

Bring Back the Windows 7 Start Button with Classic Shell 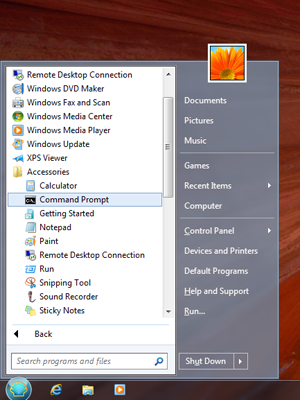 The Start button in the lower left corner worked great since Microsoft introduced it nearly 20 years ago in Windows 95. The Metro UI tiles and Start screen instead of the Start button arguably got Microsoft CEO Steve Ballmer fired. It’s hard to find people who love the new Windows 8/8.1 UI, so a bunch of third-party apps bring back the classic Windows 7-style Start button and menu, including the best one called Classic Shell. It returns a Start button. The Start Screen is still available with a couple of button clicks.

The Classic Shell installer will give users the option to add a Classic Internet Explorer and Classic Windows Explorer. Users can decide if they’re worth installing. We don’t recommend them.

Move Personal Documents and Files to a MicroSD Card 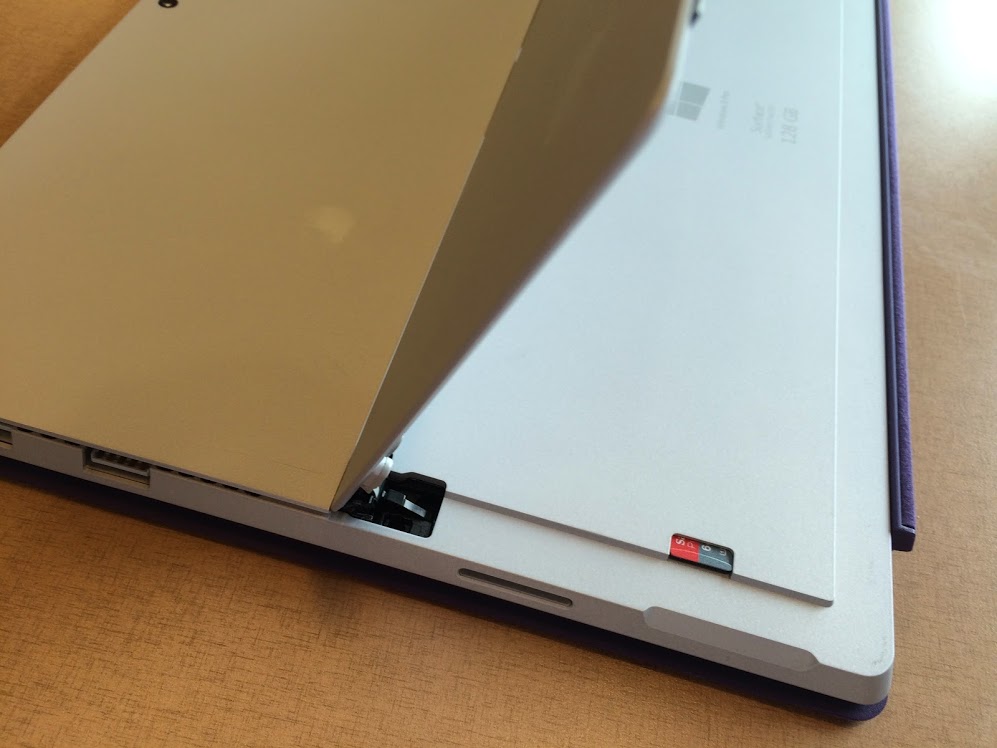 The largest capacity Surface Pro only comes with 512GB of flash storage, but it costs nearly $2,000. Most users will opt for one with less storage, like the 128GB model for $999, the sweet spot in price/feature balance. To add storage, pop a micro-SD card into the slot hiding behind the kickstand on the back. 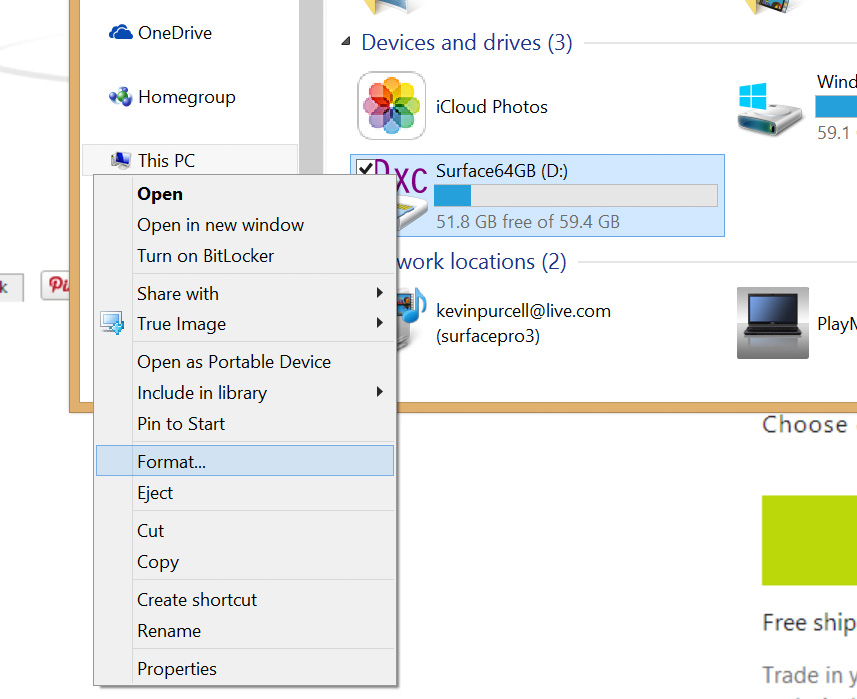 In Windows Explorer right-click the Drive and choose format.

If necessary, format the card. Open Windows Explorer from the Desktop or Start Screen and right-click on the card icon after choosing This PC from the left hand side of Windows Explorer (see above). Pick NTFS in the second drop down menu that shows up after choosing Format from the menu. NTFS plays better with Windows 8. The only reason to choose some other format is if you plan to use the card on another operating system.

Create a folder on the newly formatted card. Name it something like Personal Files or My Files. The name doesn’t matter. 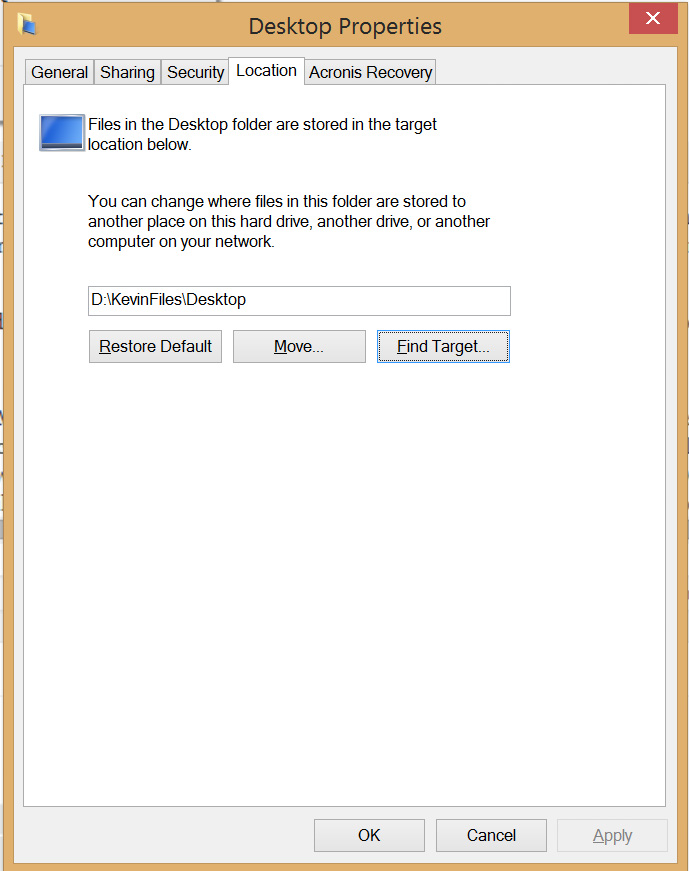 Right-click the personal folder like Documents and choose Properties and then the Location tab.

Go back to Windows Explorer and click on This PC from the left side and the right-click on the personal folders like Documents, Pictures, or others. They show up in the upper section of main Windows Explorer screen. Choose Properties from the right-click menu. Click the Location tab. Select Move… and then find the folder created on the micro-SD card earlier. Create a new folder with the same name of the folder you’re moving. For example make a new Desktop folder, a new Documents folder, etc. Repeat the step for each of the personal folders that should go on the SD card. This will move the files to the card. Any files saved in that personal folder will get saved on the card from this point forward.

Sometimes users want to turn off notifications so they won’t show up or make sounds, but they don’t want to turn these off permanently. Windows 8.1 lets users temporarily mute them. 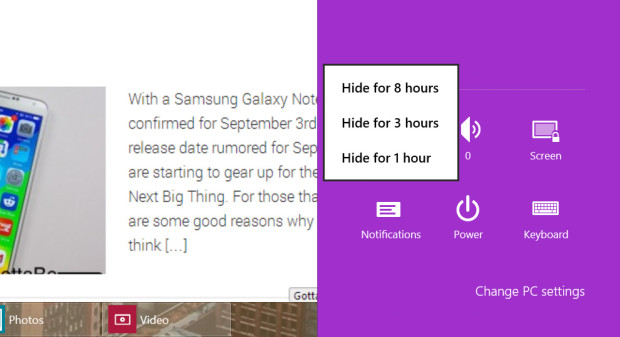 To change notification temporarily, slide in from the right edge and tap Settings, Notifications.

To temporarily hide Notifications, swipe in from the right edge of the screen and choose Settings. Then tap on Notifications. The above pop-up appears. Select the time to hide these notifications. For a presentation, choose Hide for 1 hour. To get some work down for a few hours, pick Hide for 3 hours and to get some sleep at night pick Hide for 8 hours.

Hook Up to a Wireless Display 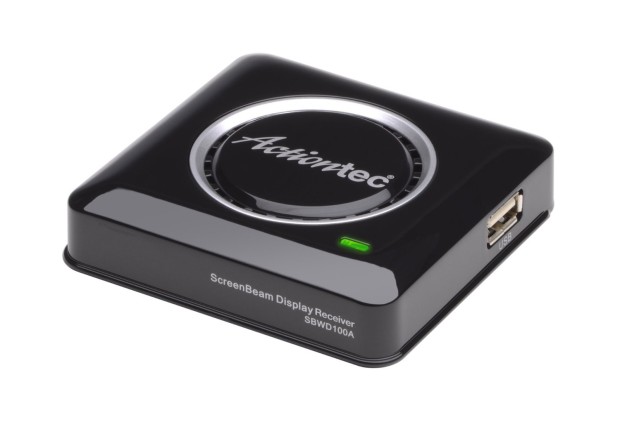 The Surface Pro 3 supports Wi-Di built-in. It’s easy to connect. Slide in from the right side of the screen and choose Devices and then Project. Then tap on Add a wireless display. The Surface Pro 3 will search for a Wi-Di enabled device and connect to it. The Actiontec mentioned above works great with the Surface Pro 3 and connects to any external display using HDMI. 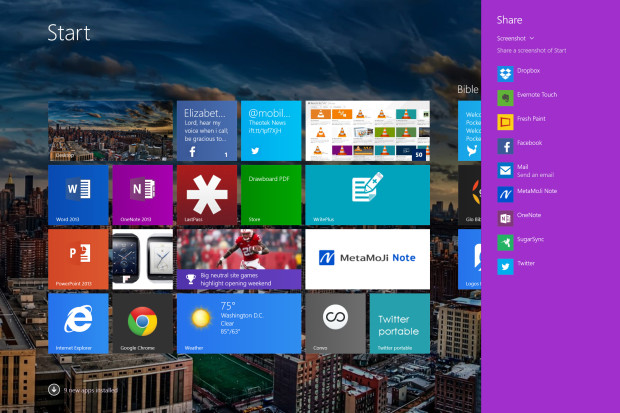 The second method uses the Share item in the Charms bar. Get to it by swiping in from the right edge of the screen and choose Share. From the Desktop, a menu shows up with apps that Windows can use to share a screenshot of the current screen. Pick one to share the screenshot using that app. 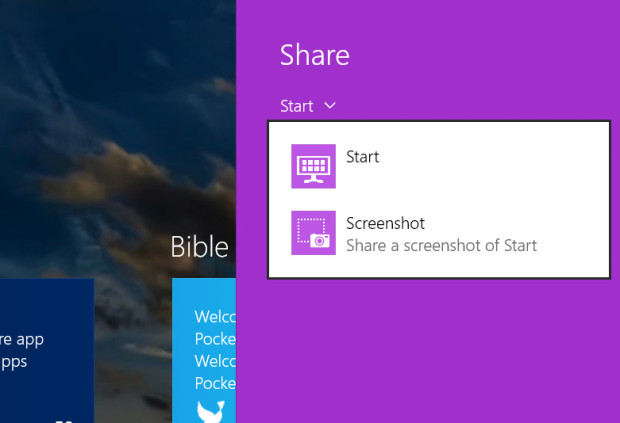 Slide in from the right side of the screen and choose Share to show this menu.

When the user’s screen shows the Start screen the above menu appear when the user swipes in from the right side instead of the list of apps. Choose Start to take a screenshot of the Start screen. Choose Screenshot to choose the app from the list that shows up and share the screenshot with that app. Fresh Paint from Microsoft that lets me edit the image and then save it to my machine. That way the user can crop it or annotate it. OneNote also does a good job of this.

Turn of Clicks to Eliminate Accidental Touches on Type Cover

Typing on the Microsoft Type Cover with the touchpad sensitivity set to normal will often result in accidental touches. While typing away at a fast clip, the user might accidentally insert the cursor into a different line and then put inadvertent text into that new location, resulting in problems in text. Fix this by turning off the tap. From this point forward the person will need to press until the touchpad clicks. 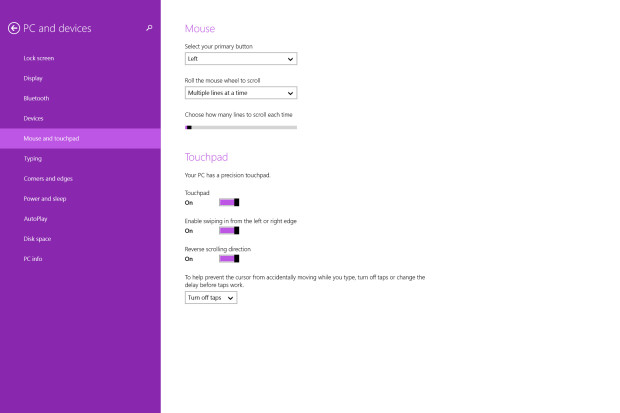 Swipe in from the right edge to show the Charms bar and choose Settings. Choose Change PC settings and then Mouse and touchpad. At the bottom of the page there’s a drop down box. Click or tap it and then choose Turn off taps. The other settings supposedly help, but even the Long delay option results in accidental taps when I type, so turn this off to stop them. Use the touchscreen or press and click on the trackpad instead of just tapping.

The onscreen keyboard works great in tablet mode. The handwriting mode accurately recognizes input from the Surface Pen, but editing the input isn’t obvious. Microsoft has a help button to show the gestures used to edit input. 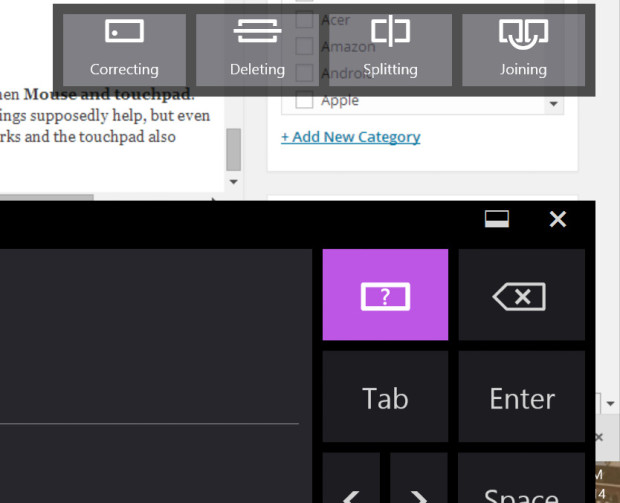 Tap on the question mark in the handwriting keyboard in the onscreen keyboard.

There’s a question mark icon above the Tab key. Tap it and four icons show up above the input area which show the four editing gestures.

The gestures take a little practice to get used to them.

I use a PowerPoint plugin that didn’t get coded well, but still offers so much usefulness that I won’t uninstall it. The problem relates to the display scaling on the Surface Pro 3. Microsoft boosted the size of text and software buttons to make them bigger since the native screen resolution measures so high it’s hard to read text or touch buttons in Desktop mode. Changing this screen scaling fixes the problem in this plugin. 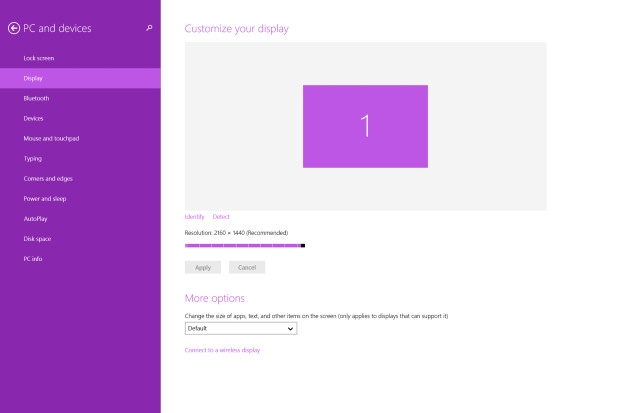 To do this, enter Settings from the Charms bar by sliding in from the right side of the screen. Tap Change PC settings at the bottom and then tap PC and devices and finally Display. At the bottom tap the drop down button and choose either Smaller or Larger, depending on which way you want to go. If it somehow got changed from the Default, tap on Default to go back to the way Microsoft says most users will want the scaling to work. 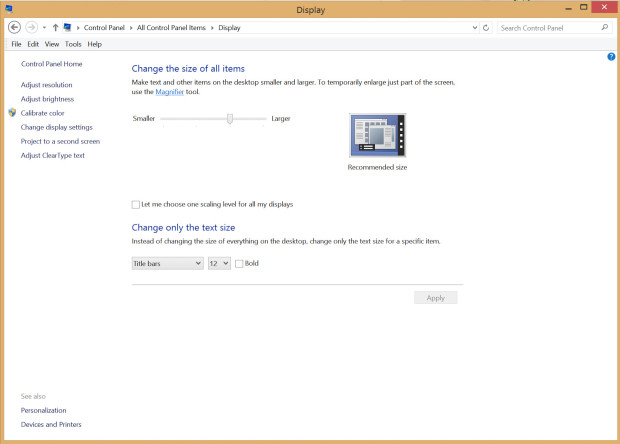 To get more control over the size of the scaling, go into the Control Panel. The fastest way is to hit the Window key on the Type Cover or the Windows icon on the right side of the Surface Pro 3 in landscape mode. Type Control Panel.

The slider at the top of the windows does the same thing as the drop down box in the other setting screen above. It just offers four levels of scaling instead of three. 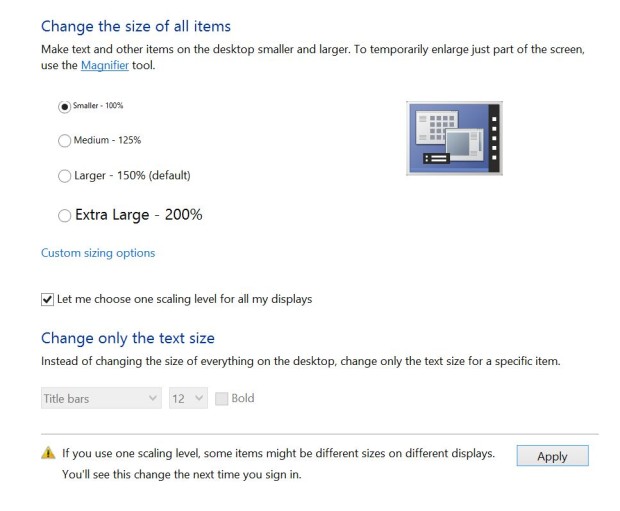 The check box in the middle of the screen, when checked, shows the more advanced scaling options, as seen above. The screen also lets users change individual scaling for particular elements, like title bars or buttons. Hit Apply to make any of the changes and then log off and log back in, or restart the Surface Pro 3 to see the changes.