I promise that I won’t post about every single book that comes out on Windows Phone development. I have to share this one though. Not only does it sound like it’s going to be a great book,  the book cover and the website are just plain awesome and I had to point them out. The title of Adam Nathan’s book is “101 Windows Phone 7 Apps” and it deals with development. 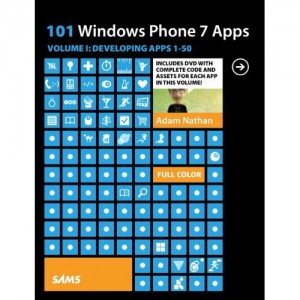 What do you think of this cover? It’s got the spirit of Windows Phone 7 covered perfectly. You should check out Adam’s website too.

The series will include 2 volumes and each chapter will walk you through the steps of creating an actual app.

The 101 apps are real apps.  Apps that are (or will be) in the marketplace.  Apps that people are willing to pay for.  101 apps == 101 chapters, spread across two volumes.  Volume I covers 50 apps, and Volume II will cover 51 apps. Volume I is organized as follows:

You can pre-order 101 Windows Phone 7 Apps, Volume I: Developing Apps 1-50 from Amazon