Apple’s computers have had the best out-of-box experience for several years. The experience is now even better with the introduction of the new MacBook Air models and OSX Lion.

As someone that’s purchased more than a dozen Macs, I’m used to the unboxing experience. If you haven’t bought a Mac in a while (if ever) or are just wondering why Mac users love the Mac experience, watch the below videos.

The packaging is nearly identical to the 2010 MacBook Air’s. The MacBook Air’s lid immediately greets you after taking off the top half of the box. A pull tab makes it easy to pick up the MacBook Air, which is wrapped in clear, skin-tight plastic rather than the baggy plastic sleeves that adorn most new PCs.

You can read part 1 of our MacBook Air review here and our review of the MacBook Air’s battery performance here.

Beneath the MacBook Air is the MagSafe power adapter. Apple is one of the few laptop makers that appears to give a damn about power adapter design. The adapter is tiny and comes with two plugs that can be swapped out. A small one comes pre-installed on the adapter and is preferable for traveling light. The second one has a cord that’s 6 ft long, extending the adapter’s reach to 12 ft. The power adapter also has two flip-out pieces of plastic that can be used to neatly wind up the cord when not in use. Of course the best part about the MagSafe adapter is that it automatically disconnects when someone trips over the cord WITHOUT damaging the computer or dragging it off a table.

The only thing in the box besides the 11″ MacBook Air and the Magsafe adapter is a small packet of booklets that include basic instructions and regulatory information. There isn’t even a recovery USB Flash drive like there was in last year’s MacBook Air boxes. That’s because the recovery software now resides in a hidden drive partition. Apple is working to kill off the need for external drives, including optical drives and flash drives that can be used for loading software. Instead, Apple prefers that you purchase software via its App Store.

Starting up the 11″ MacBook Air and getting online for the first time is a breeze. The experience is very simple and anyone that knows their WiFi network’s password can complete the process in about three minutes.

With previous MacBooks, users were greeted by a splash animation welcoming them to their new Mac when booting up for the first time. Apple’s killed off the animation so that there’s one less step to getting to a useable desktop.

As you can see in the above video, all you need to do is set up your WiFi password, select your time zone and setup your user account to get started. Apple makes it clear that you don’t even have to register your MacBook Air to take advantage of its one-year warranty, though it is a good idea to expedite service and support calls.

OSX Lion, Apple’s latest Mac operating system, may take some getting used to for long-time Mac users. In particular, trackpad scrolling is reversed by default compared to earlier versions of OSX. I’m still getting used to all of the minor changes.

Once the setup process is complete, MacBook Air users are greeted with a completely clean desktop. Not even the Macintosh HD is on the desktop anymore. The only thing you’ll see on the desktop is a menu bar across the top of the screen and the dock at the bottom of the screen. The dock is shown by default, but I always configure preferences to auto-hide the dock for an even cleaner look. 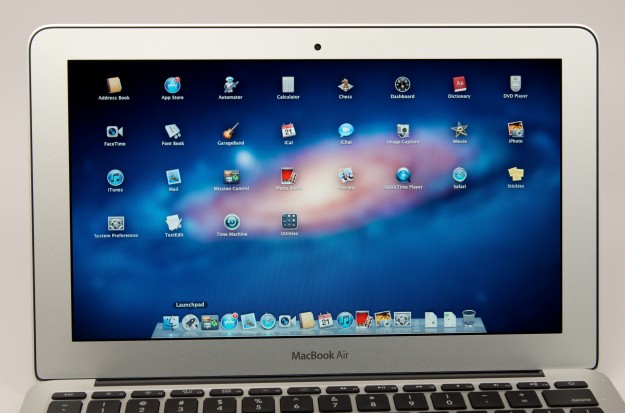 Clicking on Launchpad in the dock launches an application launcher that resembles what you’ll find on an iPad or iPhone.

The clean desktop will be a big departure for most PC users. Most consumer PCs are saddled with crapware and free offers. These so-called extras mean users are greeted by sales pitches rather than apps that are fully usable. Consumers who want a clean Windows PC experience need to fork over extra bucks or go out of their way to look for an out-of-box experience that’s void of Anti Virus offers and their ilk.