Apple identifies the MacBook Pro models with a word-year indicator, so these are known as the MacBook Pro Retina Late 2013 models. There are specific Apple model numbers to look for if you are buying one of these from a third-party like Amazon, Best Buy or Mac Mall, but the Apple Store should only stock the new models.

The MacBook Pro with Retina is not user upgradeable like the older MacBook Pro, so users will need to get the RAM and storage they need when ordering. There is no way to buy these via a third-party and install them yourself. While users can add external storage, the internal is set at what you buy on day one.

Let’s run down a few of the things that are the same across the MacBook Pro Retina line. Namely the connectivity options are identical as are the built-in cameras. Here’s a rundown of what you get.

We’re comparing the late 2013 MacBook Pro Retina models, focusing on the differences between the 13-inch and 15-inch options, which extend far beyond the display size. Here’s a look at the most important specs and features consumers should consider when buying the new MacBook pro with Retina Display.

The new MacBook Pro Retina models come with a 13-inch and 15-inch display options which actually measure 13.3-inches and 15.4-inches respectfully. These LED backlit displays come with a glossy finish and Apple does not offer a matte finish like it used to on the 15-inch MacBook Pro none-Retina model that it no longer sells. 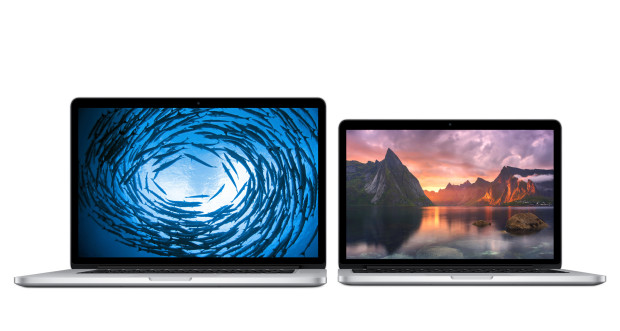 The 13-inch MacBook Pro with Retina Display offers the following specs and options;

and the 15-inch MacBook Pro with Retina offers the following display;

While the display size and resolution are important, if portability is a major concern it may be wise to look at the 13-inch Macbook Pro Retina and add a large monitor at home or the office for longer work periods. 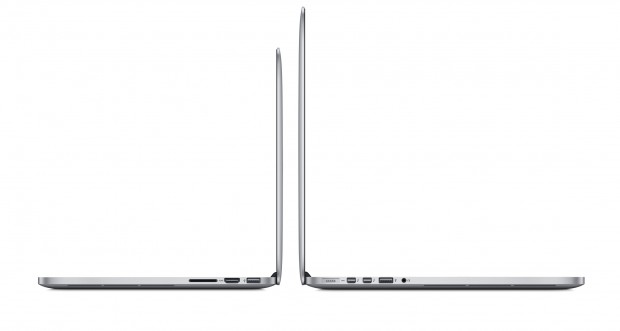 An extra pound may not seem like a lot, but for users who are carrying the MacBook Pro Retina around all day during conferences, travel and on a commute it could be a deal breaker. You may not need to be as ruthless as a backpacker when it comes to carrying your gear, but it’s pays to give attention to the weight of these new MacBook Pro models.

The dimensions are listed below. The 15-inch model is slightly wider and deeper to handle the bigger display. 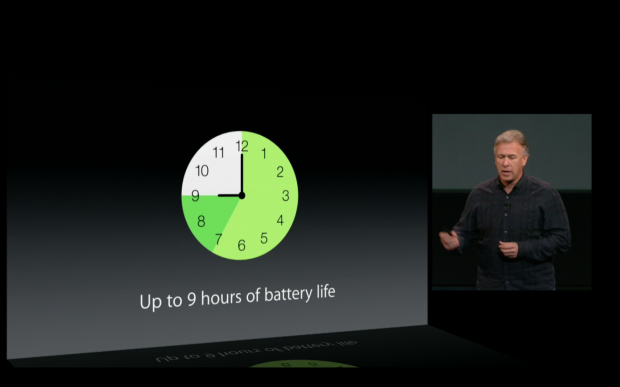 The battery life is longer on the new MacBook Pro Retina (Late 2013).

Apple’s MacBook Air beats both estimates, with a 12-hour estimate for battery life that some users can stretch out farther, so keep that in mind when comparing systems.

When it comes to new Macbook Pro Retina specs and performance there are a variety of options to consider, but the two biggest differences between the 13-inch and 15-inch MacBook Pro Retina Late 2013 are processors and graphics.

When it comes to processors, both of the new MacBook Pro Retina notebooks use Intel 4th Generation Core i family processors, often called Haswell. Both offer Core i5 and Core i7 options, but these are not the same processors.

The 13-inch MacBook Pro Retina only offers dual-core 4th Generation processor options while the 15-inch MBPr uses quad-core processors. Essentially the quad-core processors can deliver better performance when you need to do many things at once or while using applications created to use multiple threads. Here’s a good explainer on dual-core vs. quad-core.

The next major difference is graphics. The 13-inch MacBook Pro Retina only comes with Intel Iris graphics. These are more powerful than previous integrated graphics, but some users will require the power of a dedicated GPU. Apple offers Iris Pro graphics on the base 15-inch MacBook Pro Retina, and saves a NVIDIA GeForce GT 750M with 2GB of GDDR5 RAM and an automatic switch between the two.

Users cannot upgrade later and cannot the base 15-inch MacBook Pro Retina can not be customized with the NVIDIA GPU, forcing users to pick the $600 more expensive model, which also doubles the RAM and storage.

The new MacBook Pro Retina models are cheaper with a starting price that is now $200 lower. This price drop comes with some catches including lower amounts of starting RAM, but for some users they are welcome.

The $700 price difference accounts for the larger display, better graphics, more storage and RAM and a quad-core processor, so it’s not negligible.