The Samsung Galaxy S3 is packed full of hidden features that deliver a premium experience.

Some of the best Galaxy S3 features are hidden in menus and settings, and this guide will show you how to get more out of the Galaxy S3 without the need to spend any money on apps or accessories.

For users who do need to do more, we have a great list of Galaxy S3 accessories that extends the usefulness of the popular smartphone.

Here are 15 of the lesser known Samsung Galaxy S3 features we found while using the popular iPhone 5 competitor for the last several months.

The Samsung Galaxy features a handy starter mode that lets first time smartphone owners use a simpler interface without giving up the benefits of apps and smartphone access to information. With the Starter mode turned on, users can access smartphone settings and commonly used features right from the home screen. 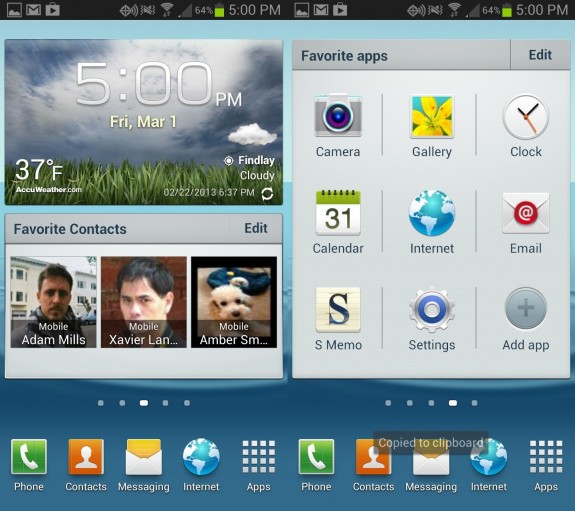 Keep the Galaxy S3 Display On

The Samsung Galaxy S3 can sense when you are looking at it and keep the display active even if you aren’t touching it. This is great when looking at long items, sharing photos or just keeping the screen active when you don’t need to touch it.

To turn on Smart Stay go to Settings -> Display – Smart stay. The Galaxy S3 will show a small icon on the screen when it detects your eyes and will keep the display active.

If you need to get the camera up and ready to take a photo as fast as possible you can turn on a setting that lets you open the camera by holding the screen with a finger and rotating the Galaxy S3. 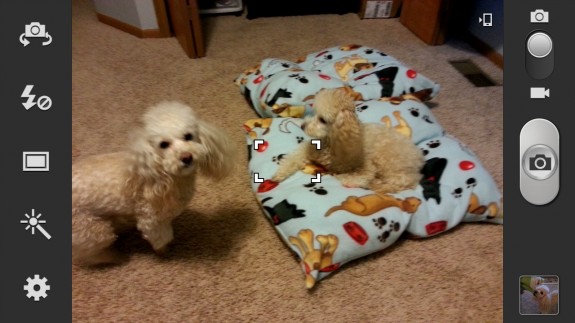 To do this, Go to Settings -> Lock screen -> lock screen options -> Camera quick access. Now, when the lock screen is on, tap and hold ont eh screen and rotate from portrait to landscape mode to launch the camera.

Double Tap to the Top

To turn this on, go to Settings -> Motion -> Double tap to top. Unfortunately the feature will not work in all apps, even the stock Samsung browser. Hopefully Samsung expands this nice hidden Galaxy S3 feature in the future.

Users who find themselves constantly calling contacts from the messages app or from the contacts app should turn on the Direct call feature. With Direct call enabled, you simply pick up the phone to your ear while a text or contact is on the display and the Galaxy S3 will make a call.

The Galaxy S3 doesn’t support lock screen widgets like the Nexus 4, but it does let users put a Facebook ticker on the lock screen to keep up with the latest status updates.

Users can also choose to see news or stock alerts on the lock screen with this setting. 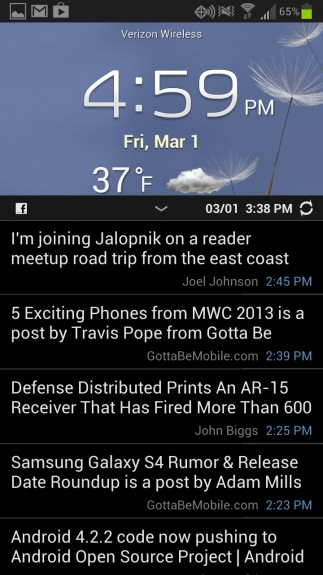 To turn this hidden Galaxy S3 feature on, go to Settings -> Lock screen options -> Information ticker. Users can then tap on the line to pick which ticker they want.

Read: How to Get Better Galaxy S3 Battery Life

By turning on this setting, the Galaxy S3 automatically limits the processor, screen power level background color and turns off haptic feedback. Together all of these will help the battery last longer without buying the Galaxy S3 extended battery.

Go to Settings -> Power saving mode -> Toggle on. Users can pick which power saving options they want to use.

The Samsung Galaxy S3 includes Google Now, the Android equivalent to Siri that can do much more than Apple’s personal assistant. Hold the Menu button on the Galaxy S3 for a second and it will launch Google Now.

From here, you can see cards of important information about weather, traffic, your sports teams and much, much more.

Limited data plans can cause big fees for data overages, but the Galaxy S3 features a data monitor that tracks the data you use and can set a data alert limit and a data cutoff limit. The phone may be slightly off from a carrier’s official count, but it’s a good way to easily keep data usage under control. 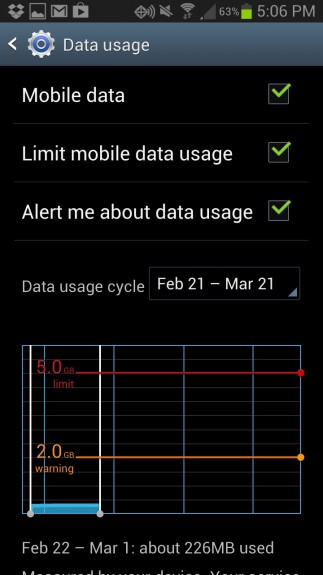 Go to Settings -> Data usage -> check Limit mobile data usage and Alert me about data usage. Then drag the sliders to set limits int eh bottom part of the screen.

If you want to switch between your recently used apps on the Galaxy S3, hold the physical home button for about a second and a list will appear. Tap on one of the apps to switch to it. Swipe to the right on an app to kill it. 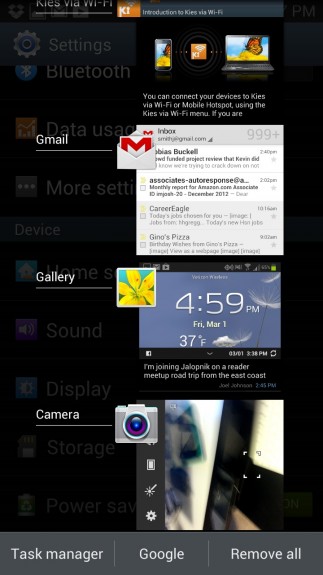 Check the currently running apps on the Samsung Galaxy S3.

This feature is on by default and is a handy way to toggle between apps.

Some users prefer to see the Samsung Galaxy S3 battery life percentage instead of a hard to decipher battery icon. This setting puts the percentage and the icon in the notification bar for fast and precise access.

End Calls with the Power Button

To turn this on, go to Settings -> Accessibility -> The power button ends calls -> toggle on.

Wake with your voice

Go to Settings -> Lock screen -> lock screen options ->Wake up in lock screen. Next tap on Set wake up command and customize the commands and the actions.

You can set it up to open the camera, unlock the phone, check your schedule and more.

The Samsung Galaxy S3 features NFC and support for S-Beam, a cool feature that lets users tap two Samsung devices back to back and share files instantly We’ve used this to quickly share a movie from the Galaxy Note 2 to the Galaxy S3 without any pairing  or emailing.

Go to Settings -> More Settings -> Turn on NFC and S-Beam. Next open up a photo or a video in the gallery and then tap the Galaxy S3 to another Galaxy S3 or Galaxy Note 2 and tap to send. The file will share wirelessly between the two devices.

Turn Over to Mute Calls

The Samsung Galaxy S3 also allows users to turn the phone over to mute a call or to pause music. This is a great way to stop a vibrating phone while in a meeting or to just ignore the 5th sales pitch of the day.

To set this up got to Settings -> Motion -> Turn over to mute/pause. Once this is on, turning the phone over will stop the ringer and vibration, but won’t end the call so the caller won’t know you’ve muted them. You can also respond with a text message after doing this.