Today at CES I got a chance to go hands-on with Samsung’s 15-inch Series 9 ultraportable. I’d been able to fondle the 13.3-inch version before and came away impressed with the size and weight. Now that I’ve seen the larger model I may find choosing between them hard.

The larger Series 9 is about the same size as the original that came out last year. How is that possible? Just as with the smaller version, Samsung decreased the bezel size and managed to fit everything into a 14-inch chassis.

Like it’s smaller brother, the 15-inch has a SuperBright 400 nit 1600 x 900 resolution matte display. With Intel’s Core i5 processor inside, 8GB of RAM, and a 128GB SSD, this should be fast enough to deal with any mainstream computing tasks you throw at it plus some heavy duty stuff like photo editing and video creation. When we get this in for review I’m definitely putting that to the test.

The version in the video is the darker Mineral Ash Black color but it also comes in a more natural aluminum shade. Finishing off the design is a backlit keyboard.

Which would you choose? The smaller Series 9 or the 15 incher? 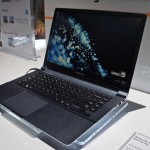 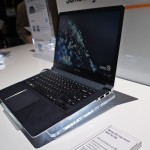 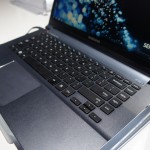