The iPhone 5S is official and while it looks like the iPhone 5, there is a brand new iPhone under the hood and there are a lot of new iPhone 5S features that iPhone users can look forward to when the iPhone 5S release date arrives later this month.

The iPhone 5S puts a big emphasis on performance, on the new camera and on security with a fingerprint sensor built-in to the home button and a few other nice little additions to the new iPhone.

The iPhone 5S comes with a built-in fingerprint sensor underneath the home button. The iPhone 5S home button is still a clickable button that offers access to Siri, the home screen and multitasking, but placing your finger on it will also unlock the iPhone with your Touch ID. 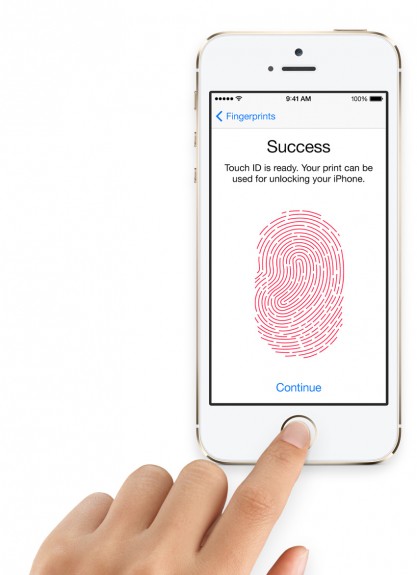 A stainless steel ring surrounds the Sapphire covered home screen. This ring detects when a finger touches it and will wake up iPhone 5S fingerprint sensor so it can read your fingerprint and unlock the iPhone 5S. This is unique to the iPhone 5S, and not something that will come to any previous iPhones with the iOS 7 update.

Apple just added a new iPhone 5S color option with the Gold iPhone. This is the third iPhone color for Apple, and it is only available on the iPhone 5S. 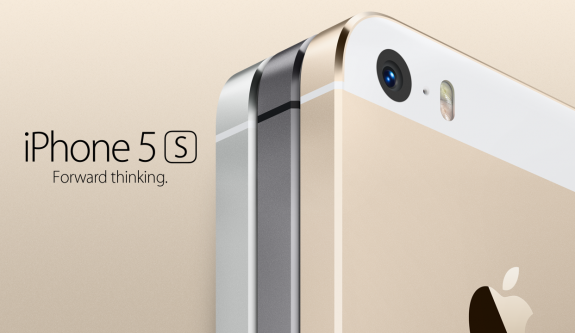 Apple is selling an iPhone 5S in gold for the first time.

iPhone buyers looking for more colors will need to look at the iPhone 5C, which comes in five vibrant color choices. Unlike most Android phones, the gold iPhone 5S should come to every carrier that sells the iPhone 5S.

Better iPhone Camera All Around

This means users can take better looking photos with the new iPhone. Specifically, the iPhone 5S should be able to take better low light photos, which is a pain point for most smartphone cameras.

Better Gaming on the iPhone

Apple is making a major play for mobile gaming with the iPhone 5S and iOS 7. The iPhone 5S features a new processor that supports OpenGL ES 3.0, which is a fancy way of saying it can handle stunning visuals that used to be limited to computers.

For example, games on the iPhone 5S will be able to deliver more realistic shadows and textures and in game environments can have sun reflect off water. Apple also claims the iPhone 5S processor can deliver twice the graphics performance of the iPhone 5.

The iPhone 5S is no thicker, but it boasts better battery life.

The Apple A7 processor is brand new for the iPhone 5S, delivering the boost in graphics as well as a speed boost in CPU of up to two times the iPhone 5 to deliver a better user experience. 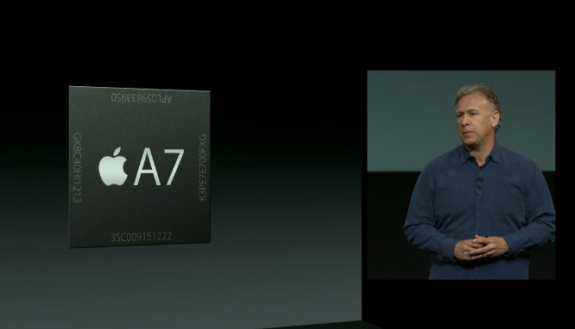 The iPhone 5S is powered by a new 64-bit Apple A7 processor.

The Apple A7 processor is a 64-bit processor, which Apple claims is a first for smartphones. iOS 7 is written specifically to take advantage of the power of this new chip. Even users that don’t care about iPhone 5S specs, should see a benefit from the new Apple A7 processor.

The iPhone 5S can take slow motion video to make exciting moments just a little more exciting by slowing them down 3X to highlight a suspenseful moment or action. 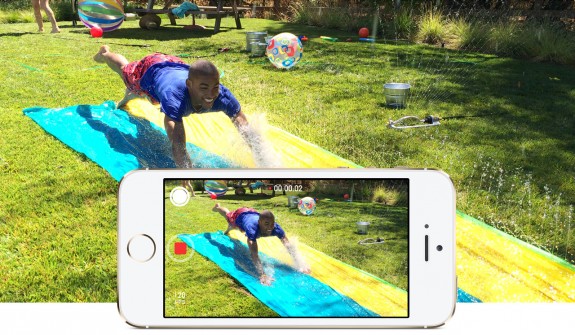 Users can record the 120 fps video at 720P on the iPhone 5S, a feature that will not come to the iPhone 5 or other devices.

The Apple M7 processor is a co-processor with the A7 processor that is designed to gather motion data from iPhone sensors in order to deliver better battery life and smart actions. 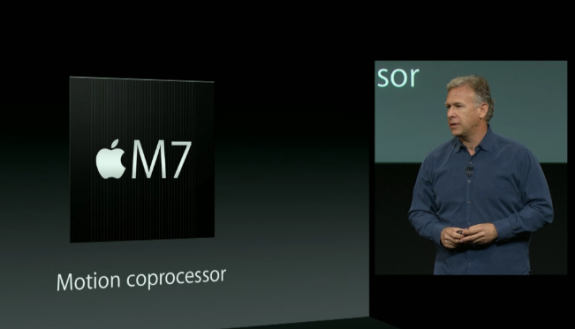 The M7 processor helps deliver smart actions based on movement.

The Apple M7 processor knows when you are driving in a car and won’t pop up alerts for open WiFi, automatically switches from driving to walking directions based on your movement and can slow network activity if it senses you are asleep to save battery life. 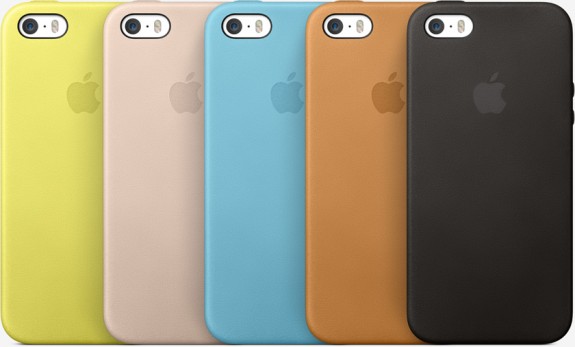 The new iPhone 5S cases come in nine color options with a leather outer and a microfiber inner to keep the iPhone 5S safe from falls.

The iPhone 5S camera gains several unique features including burst mode with a boost from the Apple A7 processor. IOS 7 brings burst mode to both the iPhone 5S and the iPhone 5, but the 5S has a few extra tricks.

Take 10 photos per second with iPhone 5S burst mode and the iPhone identifies the best photo or photos.

The iPhone 5S can capture 10 frames per second, so holding the shutter button for two seconds takes 20 photos. This is great for capturing action shots. Like modes on Android phones, the iPhone 5S’ A7 processor will automatically identify the best shot then let users save it instead of all of them.

Apple excitedly announced better fitness tracking on the iPhone 5S thanks to the new M7 co-processor. The same processor that helps the iPhone know when to do certain things is tracking your movement and making it available to apps that can track your fitness and health. 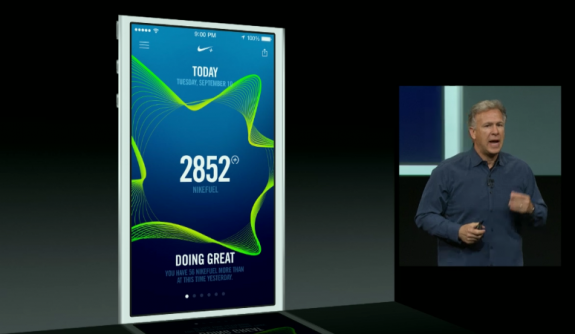 The iPhone 5S will work with a new Nike+ Movement app to track your health and fitness.

Nike is developing a new Nike+ Movement app that can help users stay active throughout the day to track activities during the day and uses the Nike Fuel points that are already a part of the Nike Fuelband accessory.

Apple adds a new Dual-LED flash to the iPhone 5S which it calls an intelligent True Tone flash. The iPhone 5S figures out the color temperature of the subject or room in your photo to flash the two LEDs at the right intensity to deliver the best flash for that photo. 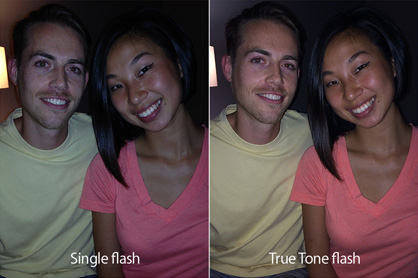 Apple claims this offers over 1,000 combinations of flash colors which will offer better colors, more natural skin tones and it also works for iPhone 5S videos as well.

The iPhone 5S can also take better panorama photos than the iPhone 5. iPhone 5S owners gain a faster capture at up to 30 frames per second, but that’s not the best part.

The iPhone 5S panorama can use dynamic auto exposure to adjust the exposure of the panoramic photo so there aren’t super dark, or super bright points in the panorama.

The iPhone 5S and iPhone 5C both come with free iWork, iPhoto and iMovie apps, which users can also use on their iPad. These apps normally cost $40 in the iTunes App store. 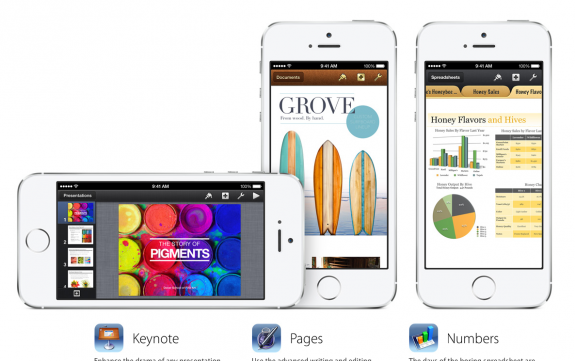 Apple includes $40 worth of iPhone apps free with the iPhone 5S.

iPhone 5 users that upgrade to iOS 7 will not get the apps for free, as they are only free on new iOS 7 devices sold after the iPhone 5S release.

Rounding out the new iPhone 5S camera features is auto image stabilization. If you’ve ever taken blurry photos thanks to a subject moving or your hand shaking you’ll love this feature. 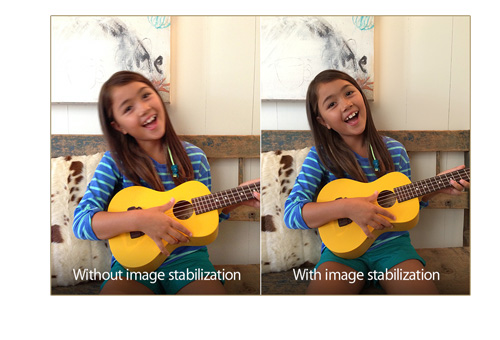 The iPhone 5S takes four photos at a short exposure time and then combines them into a single photo for a better overall result. The image above speaks to the benefits of auto image stabilization on the iPhone 5S.