The 16 GB black version of Google’s latest Nexus 5 flagship has proven to be the most popular variant of the phone as the Play Store is now listing that particular model as being sold out. Other variants include the 16 GB white model, and the 32 GB black and white models, with all those models showing that the devices will ship from Google within 2 to 3 weeks.

The 16 GB models of both colors retail for just $349 contract-free and unlocked while the 32 GB model goes for $399. The Nexus 5 comes with high end specs, such as a powerful Snapdragon 800 processor from Qualcomm, a full HD 1080p display, and an 8-megapixel camera with optical image stabilization, or OIS. These specs make the Nexus 5 competitive with flagship smartphones from other makers, including the LG G2, the Samsung Galaxy Note 3, and the HTC One. The device also launches with the latest Android 4.4 KitKat out of the box that features always-on Google Now voice recognition. 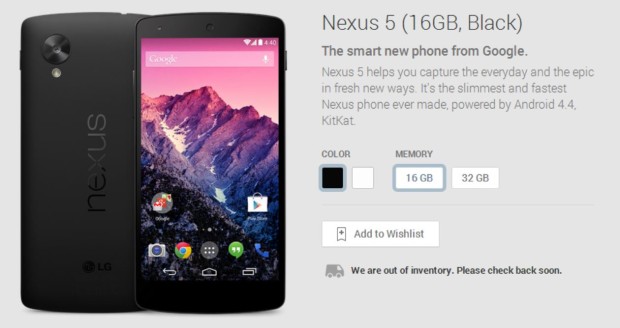 The Nexus 5 also has built-in wireless charging using the Qi standard and 4G LTE support for networks operated by AT&T, Sprint, and T-Mobile in the U.S. The phone is also carried by and sold through T-Mobile and Sprint stores.

It’s unclear if the sell out is due to inventory shortages, as has been the case with the launch of the Nexus 4 last year, or if it’s a matter of overwhelming demand for the smartphone.

Google has so far not given any indication on when it expects new inventory of the 16 GB black model of the Nexus 5 in stock for the Google Play Store.