When an iPad buyer gets their wonderful iPad mini or iPad Air home, they might eventually make their way to the iPad Settings screen and change a few things for a better experience. We wanted to share a few Settings that people usually don’t consider.

Before continuing, connect the iPad to a computer via a Lightening cable that came with the iPad, or one like it. Fire up iTunes and click on the iPad, either in the upper right corner (as seen below) or along the left, if the Sidebar is visible (View menu, then Show Sidebar). Choose Back Up Now from the iPad’s screen.

Click on the iPad from this drop down menu if the iTunes sidebar is hidden.

Once finished, start changing the Settings below that fit your use of the iPad Air or iPad mini. In each of these tips the user needs to start by opening the Settings app. 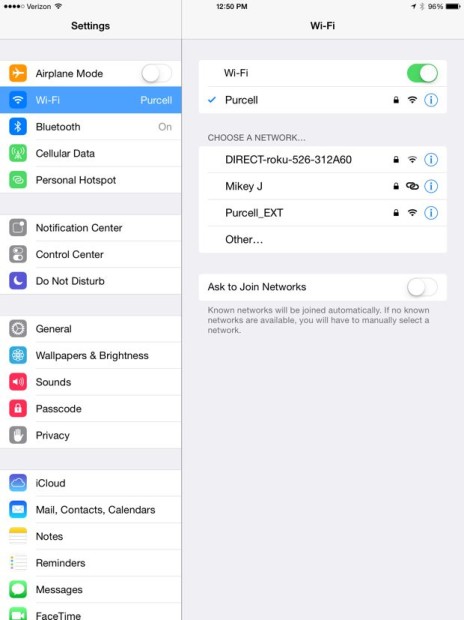 Use an iPad long enough and it will ask to join nearby Wi-Fi networks. This gets annoying in an area with a bunch of networks.

To turn this off, select Wi-Fi along the left side of Settings. Find Ask to Join Networks and tap the slider button. Tap it. Don’t try to slide it. The iPad will stop asking after this change. 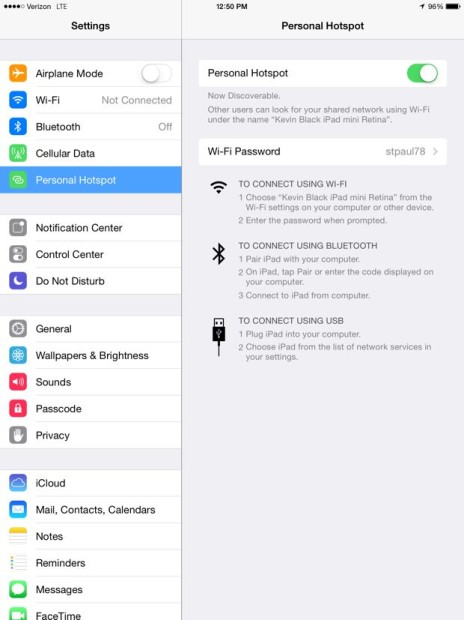 Using an iPad with LTE as a personal hotspot can keep a user productive or entertained while away from home or the office. It’s a good idea to give the iPad a name that’s more identifiable.

First, change the name in Settings by going to General. Tap About and then Name and type a new name.

Next, change the Personal Hotspot’s password in Settings. Choose Personal Hotspot. Tap Wi-Fi Password and enter a new one. Make it memorable, but not easy to guess. Go back and turn on the hotspot. Connect as you would any Wi-Fi network.

The iPad’s Notification Center includes useful information at a glance. It shows up by sliding down from the top of the iPad screen edge. However, some users won’t want everything Apple includes by default. Follow our guide for using the Notification Center to change settings. The guide focuses on iPhone, but works the same for iPad with minor differences. 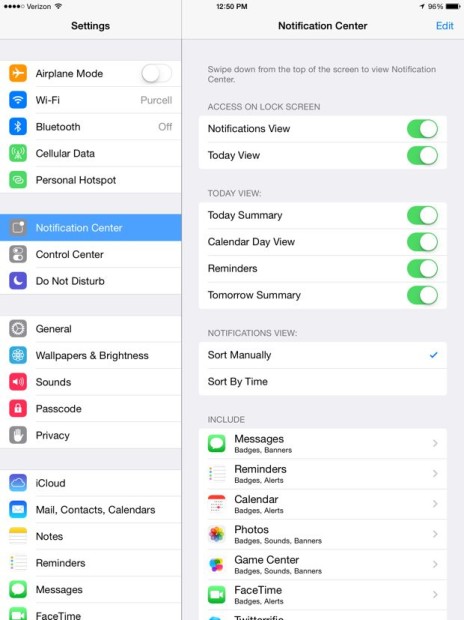 Remember to turn off settings for apps that don’t need to show up in the Notification area. 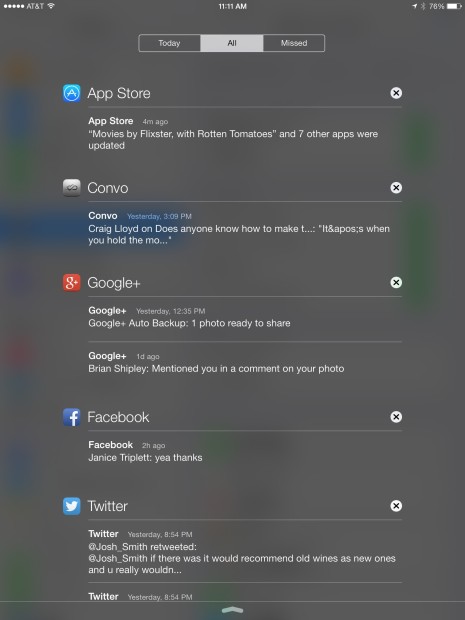 Turn Off Control Center on Lock Screen for Security

Like the Notification Center, the Control Center gives users useful controls by swiping up from the bottom of the screen up this time. Security minded users will want to turn this off on the lock screen because it lets people access certain things without the iPad owner’s passcode. 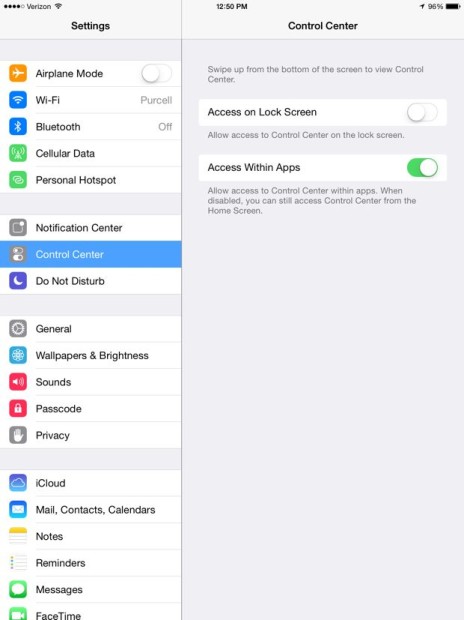 Tap on Control Center from the left sidebar in Settings and tap the green slider so the green goes away. Now it won’t work from the Lock Screen. 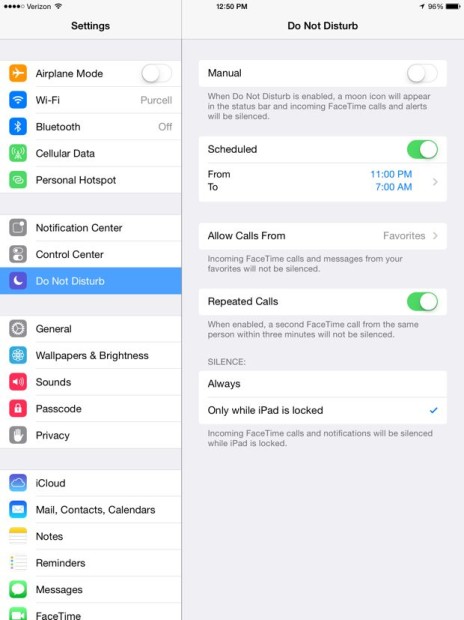 It’s annoying when an app makes a notification sound in the middle of the night, waking a user up or during a meeting at work potentially getting the person fired. To stop this tap on Do Not Disturb from Settings. Manually turn off all sounds with the Manual item at the top of the screen. Use that to do this one time or schedule a Do Not Disturb period using the Scheduled section.

Use the others settings as follows:

People might wonder how a person can “call” an iPad. This option works on iPhone for traditional calls, but on an iPad it applies to FaceTime calls.

Tweak Siri to Make it Useful 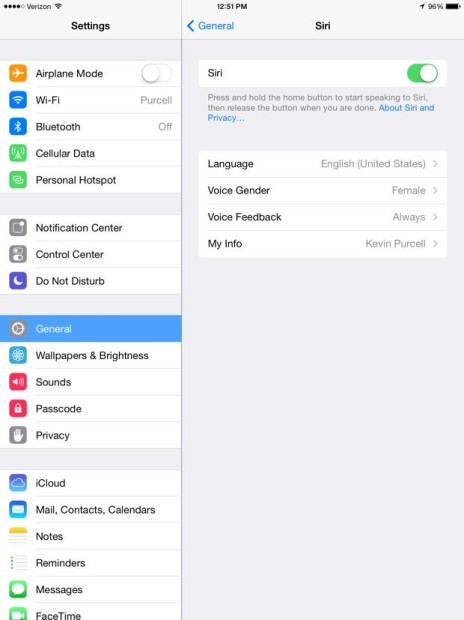 Siri’s useful but she may not work the way some users like. Change her settings by opening General along the middle of the left sidebar in Settings. Tap on Siri on the right near the top. Users can turn Siri on or off by tapping the green slider button.

The optional settings include:

Get Rid of the Moving Wallpaper to Stop Nausea

The iOS 7 “Parallax View” and “Dynamic” wallpapers and backgrounds can make some people sick. Users can turn them off and reduce the annoyance or nausea.

From Settings select from the left sidebar and then choose Accessibility near the top on the right. Find Reduce Motion in the middle of the right side. Turn it on by tapping the slider button. This reduces the motion, thus turning the Parallax view off. 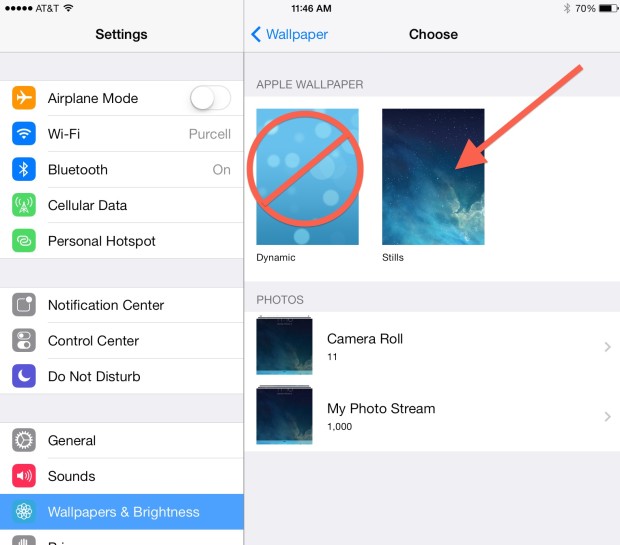 If the background keeps moving, it could be a motion background instead of a still. Change this by going to Wallpapers & Settings from the Settings app. Tap the image below CHOOSE WALLPAPERS. We see two buttons with background images. Choose from Stills or from Photos below it. Do not choose Dynamic, as these show moving wallpapers (as seen above).

Making this change not only keeps the user from getting dizzy, but also saves a little battery life.

Just like an iPhone, the iPad uses sounds to notify the user of certain things like appointments, FaceTime calls and more. Also, the buttons and switch along the side of the iPad, while in portrait mode, control these sounds. To access the iOS sound settings, open the Settings app and choose Sounds. 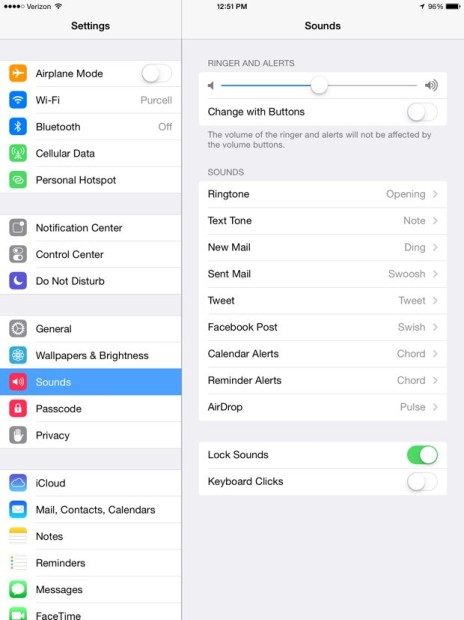 The screen offers three sections. The top controls the volume of ringers and alerts. This setting changes the way notification and ringer volume gets controlled. The physical buttons will always control the sounds of music, videos and apps sounds. This control changes whether system sounds like notifications will also raise or lower with the volume buttons. We recommend leaving it alone. Set the volume slider and leave it like that. Use the physical buttons only for controlling music, videos and apps sound.

The second section controls various notification sounds. Tap on one and choose from the various options. A preview will play, so don’t do this when in a place where you don’t want to annoy people nearby. 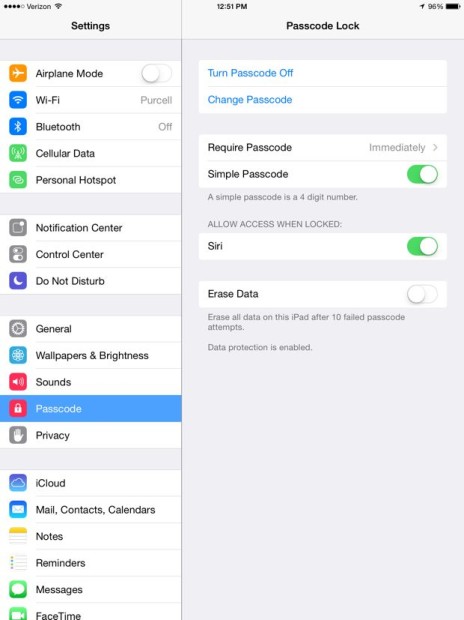 The Passcode keeps an iPad secure if someone gets hold of it. In iOS 7 this gets turned on by default and the operating system asks the user to create one the first time the phone turns on after an update or purchase. That’s a good thing. However, it doesn’t go far enough.

A four digit passcode isn’t as secure as a longer string of characters and numbers. To change this tap on Passcode (in iOS 7.1) or General and then Passcode Lock (in iOS 7.0). To get a more secure passcode change the Simple Passcode option to off.

Back Up to iCloud or a Computer Wirelessly 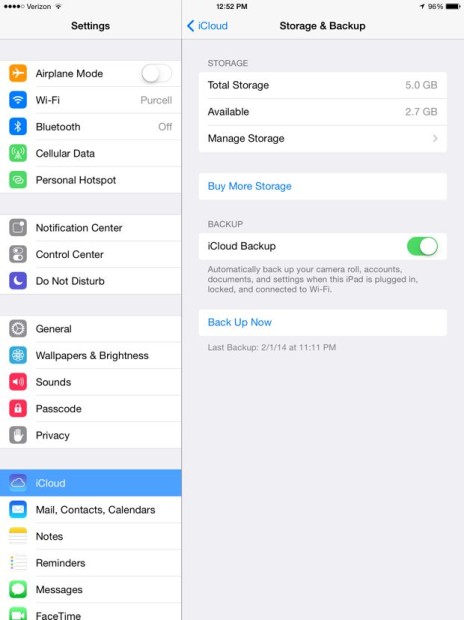 Many people think they need to connect their iPad to a computer to back it up or sync it. That’s not true after the first time. Turn on iCloud backup and the iPad will send all of a user’s important data to the cloud when convenient. It will also back up to the computer that the person first connected to for the first sync.

First, turn on iCloud backup by opening Settings and tap on iCloud towards the bottom on the left. Make sure that iCloud Backup is turned on with green showing, not the slider switch. Hit Backup Now while connected to Wi-Fi to make the first backup.

Now connect to a computer one last time in order to sync with iTunes. Then click on the name of the device in the Sidebar if it’s shown, or click on the drop down menu as we explained in the very beginning of this post. From the Summary tab of the iPad’s screen, put a check mark in the item labelled Sync with this iPad over Wi-Fi.