Last week’s unveiling of the Surface Pro 3 may have put the spotlight back on Microsoft’s in-house efforts to build a MacBook Air and iPad Air competitor, but it’s Toshiba’s new Windows tablets that are garnering the most attention this week. That’s because, the Toshiba Encore 2 will come in two sizes, a 10-inch device meant for productivity and an 8-inch device that’ll cost an ultra-low $199 and take on the iPad mini.

As The Verge revealed in a report today, the new Toshiba Encore 2 seems to be designed specifically to exploit the iPad mini’s key weakness: pricing. The Encore 2 will come with an 8-inch display, making it the perfect size for users who want to read books and watch videos wherever they are. The Intel Atom processor and the 1GB of RAM aren’t the most powerful internals that users will have to choose from in the Windows tablet space. That being said, they’re key because Toshiba Encore 2 users will be able to download and install desktop apps like iTunes and more. By default the base level Toshiba Encore 2 will include 32GB of storage, however users will be able to add more using a MicroSD card or upgrade the device’s internal storage and RAM for a bit more when they order directly from Toshiba’s site. 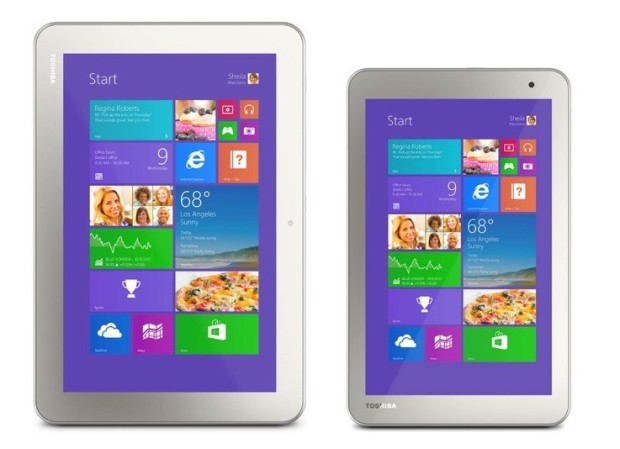 The same internals will be included in the 10-inch Toshiba Encore 2. That version of the device will cost around $300.  Both tablets are set to debut on store shelves this year.

Hardcore creative will balk at the device, but the Intel Atom processor will be fine for most users who don’t have high expectations. There’s no HDMI out port to be used here. As such, users won’t be able to pair it directly with an external monitor. That being said, Windows 8 supports wireless display technology so users will be able to pair the tablet with an external display and a keyboard and mouse for a desktop-like productivity experience.

Again, the internals of the Toshiba Encore 2 aren’t really the point as much as the pricing is. At $199, Toshiba has finally managed to put Microsoft’s operating system on a device that come within striking distance of the Nexus 7’s $199 price tag. It was the Nexus 7’s ultralow price tag that eventually sparked interest in tablets running Android. Before then the iPad dominated the space. Later Apple tried to close the gap by releasing the iPad mini.

The iPad mini also has an 8-inch display, however it starts at $399 for a device with only 16GB of storage. Even worse, users aren’t able to add to the device’s storage at all. By underpricing the iPad mini and matching the price of the world’s most popular Android tablet, the Nexus 7, Toshiba is giving Microsoft the best change it will ever have at boosting its tablet market share.

That’s because if the rise of the Nexus 7 has shown industry watchers anything, it’s that tablets at lower price points that have decent software experiences sell more than premium tablets. Luckily, Microsoft has made sure that users on cheaper tablets have a decent experience. The Windows Store includes thousands of apps customized for touch. That being said, this is a proper Windows 8 tablet so users can download their favorite desktop apps and pair the Toshiba Encore 2 with a Bluetooth mouse and keyboard for a best in class productivity experience. By comparison Microsoft’s cheapest Surface tablet includes a 10-inch display and sells for $449.99 without a keyboard cover.

Microsoft is boosting that productivity experience by including a year of its Office 365 productivity suite and services at no extra charge. That Toshiba Encore 2 users will get a year of Word, Power Point, Excel and more at no additional cost. Separately, a year of Office 365 would cost $99 on its own.  They’ll be able to unlock these apps on their smartphone or PCs too. Today, that’s just something the iPad mini can’t match.