NVIDIA created an appealing reference hardware tablet platform using its powerful Tegra 4 SoC processor that comes with a digital stylus, and the best part is the affordable $200 price tag for the tablet. The 7-inch slate would compete closely against Samsung’s Galaxy Note 8.0 8-inch tablet that features an S Pen stylus that uses Wacom’s inking technology.

However, unlike Samsung, NVIDIA isn’t going to be making and selling the Tegra Note tablet. Instead, it is hoping that other manufacturers will adopt the tablet and bring it to market. The company had announced that eVGA, PNY, Zotac and XOLO all signed up to make the tablet and bring it to market under their own brands, however it’s unclear if such a strategy to market the same device under different brandings will help NVIDIA or confuse customers in the market, especially with Samsung heavily marketing and branding its products for their unique features.

The Tegra Note will feature a 7-inch 720p HD display, a Tegra 4 processor, 2 GB of RAM, and NVIDIA’s DirectStylus support for the digital inking pen. Though the 720p HD display sounds a bit meager given the shift to 1080p full HD displays this year, the resolution is still quite comparable to the Galaxy Note 8.0 that the Tegra Note will compete against; the Note features a 1280 X 800-pixel display. Still, the $200 Tegra Note costs half as much as Samsung’s $400 Galaxy Note 8.0. 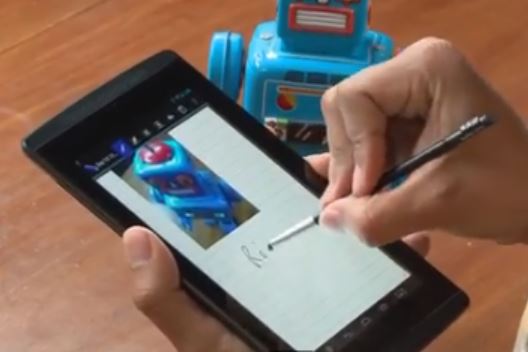 It’s still unclear how the DirectStylus pen compares to digital inking technologies from N-Trig and Wacom in terms of pressure sensitivity and accuracy, though NVIDIA claims that the stylus provides for three times faster responsiveness. The DirectStylus will make the Tegra Note an appealing product for those who need to draw, capture signatures, or take notes, including students and business users.

From the teaser shots so far, it looks like the device features stereo speakers, which are placed on either sides of the display when held in landscape mode.

This isn’t the first time that chip-maker is entering the hardware space. NVIDIA had launched a handheld gaming device running the Android OS under the NVIDIA Shield brand in the past. The question is if the same hardware under different branding will be too confusing for the market for Tegra Note?