If you missed out on all the 2012 Super Bowl commercials, you didn’t miss much.

That said, there were a few gems including technology ads from a number of companies including Best Buy, Samsung, GoDaddy, Teleflora and several other websites that jumped into the game this year.

I’ve rounded up  a collection of Super Bowl ads that aired during Super Bowl 46, so you can watch them in one place.

These are just the tech ads. If you want to see all the ads, check out this nice listing of 2012 Super Bowl Ads which includes Mr Quiggles, Doritios and more.

On thing that was missing from the ads this year was a focus on Facebook, with only the occasional Facebook logo showing up in ads. Twitter hashtags were more popular, but also low key.

Best Buy’s Super Bowl commercial gave us a fun look at the inventors that created the phone technology that we love and use every day. From the cameraphone to Words with Friends, Best Buy covers a lot of bases.

Why is Best Buy advertising for all smartphones? Simple. You can walk into most Best Buy locations and shop for cell phones from all the major carriers, including Verizon, AT&T, T-Mobile and Sprint. Best Buy claims this is a, “Better way to buy a smartphone.” My local Best Buy is a good example of a place you can get unbiased advice, but the fact that most of the phones are plastic dummies doesn’t make this shopping experience a real substitute for going into the corporate store. 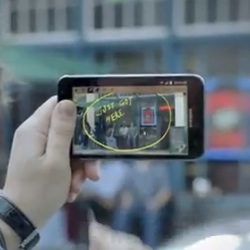 Do you believe in a thing called love? Samsung hopes you’ll fall in love with their new smartphone with a pen. This ad is over the top and the reaction to it on Twitter was so-so, but I think Samsung will create buzz for their new 5.3 inch smartphone.

The Galaxy Note is taking a lot of crap for having a pen, but with demand for iPhone and iPad styluses staying strong, I think a number of shoppers looking for a smartphone or a tablet that offers pen input, good pen input that is.

Time Warner took to the Super Bowl with Ricky Gervais to boast about speeds and tell you that everything is better with Time Warner Cable. A funny ad, but I’m not sure that it really sells Time Warner.

Chase’s Super Bowl ad shows off the company’s new QuickPay tool that allows you to send money with your smartphone. I haven’t had a chance to use the app, but I think this ad will generate interest in the service, especially from users who aren’t already on PayPal, like my parents.

Hulu enlisted Will Arnett to share the power of Hulu Plus with the world in this commercial where he gives you an inside look at the Huluboratory.

Unfortunately Will is unable to explain why Hulu can’t convince Fox, NBC, ABC and others to actually allow Hulu Plus users to watch every show on their HDTVs and Mobile devices, but I’m sure there’s a “Web Only” beaker in there somewhere that needs to be smashed into pieces. Arnett also fails to mention that if you have the newest Android devices you won’t be able to use Hulu Plus even if the app works, because they need to do more “testing” and then pay more licensing fees.

Not that I’m bitter.

No one calls the voice in this magical phone Siri, but it’s pretty clear who the users are talking to. Unfortunately, just like in real life Siri can’t get things right all the time.

When Doritos lover #2 tries to summon “three hot wild girls,” he ends up with three rottweilers.

The E-Trade baby left his iPhone and iPad at home to visit the maternity ward and talk about the future with anew father. E-Trade is working on bringing in more clients to the online trading service by calling out the ability to tap professionals for help, much like you would at a traditional investment office.

E-Trade Best Man at the Wedding

The E-Trade baby helps the groom calm pre-wedding jitters by telling him about E-Trade’s new investment tools. It works in the ad, but I’m still not sure why I need to go to E-Trade.

Focusing on the scantily clad models of GoDaddy.com and bringing in the Pussycat Dolls, GoDaddy doesn’t change anything from years past to introduce their cloud service. While the ads were voted to have poor taste by many on Twitter, I’m sure there’s a host of 15 year old future dotcom moguls exploring GoDaddy.com right now.

GoDaddy is selling .co domain names and instead of tell you about the .co domain, they decided to paint some stuff on a nude model. Imagine that. I still wouldn’t recommend the .co domain unless you can make something funny with it like teamco.co.

Teleflora Give and You’ll Receive

Taking a page out of the GoDaddy playbook, Teleflora gets straight to the point. The point being that if you give flowers to a woman she’ll give you something in return. It’s hard to put my disdain for this commercial into words, I’m only including it here because it’s for a website. I know plenty of women who would prefer an iPhone, Android or HDTV for Valentine’s Day.

Cars.com shows off a freaky floating head, which is the car buyer’s confidence after a trip to cars.com for research. Interesting approach, and memorable, at least for a few days.

CareerBuilder is back with the monkeys that made their past Super Bowl ads so funny. This time our poor sap has to go on a monkey business trip with two co-workers who place a blurred out object in his luggage and keep him awake all night.

Which ad was your favorite?