The MTV VMA live stream started yesterday with an all access look behind the scenes look at the 2014 MTV Video Music Awards show and continues today with live access to what’s happening on at Fabulous Forum in Southern California.

MTV plans a night of incredible live music performances mixed in with the 2014 VMA Nominees and viewers are definitely in for one of the biggest nights in music for 2014.

The 2014 MTV VMA live performance starts at 9PM Eastern on MTV, but if you don’t have a TV nearby you can tune in to the MTV VMA Live stream that the company bills as all access.

Watch the 2014 VMA live stream to see behind the scenes and use the app to see top performances and shareable moments.

On top of watching the 2014 VMAs live, you’ll be able to watch the best 2014 VMA performances online shortly after they are performed. Look for the hottest performances to appear on YouTube and MTV.com faster than ever.

MTV is pretty quiet about the exact MTV VMA live stream options, but you can tune in to the MTV VMA All Access Live Stream to see everything that MTV offers online.

Last year this included days of events and 10 different behind the scenes cameras offering an MTV VMA live stream. We still don’t know if this includes the actual performances, as MTV may want people to watch on TV and use this as a second screen on the iPad, iPhone, Android or a computer.

It is increasingly common for viewers to watch award shows with a tablet or phone in hand to share their reactions to the latest performances and news.

You can start watching on MTV at 8PM to see the red carpet entrances and the 2014 MTV Video Music Awards start at 9PM  with replays running back to back to back until 6AM the next day.

You can use the MTV app for iPhone, iPad and Android to follow the MTV Video Music Award show as it happens. It’s not clear how much video the app will offer, but it should be a place you can watch the performances after the event.

Expect to see the most exciting VMA moments appear in the MTV app as fast as 20 minutes and the for animated gifs of huge moments to arrive even faster.

According to Forbes the VMA Live Stream page is revamped and ready for mobile viewers on the iPhone, iPad and Android devices. In addition to the live video options MTV plans to turn exciting moments into easy to share animated gifs as soon as possible. 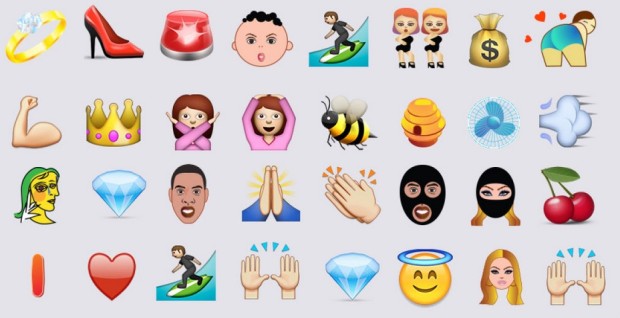 Send Beyonce Emoji using this photo since your iPhone is not ready for Beyonce.

There is even special Beyonce Emoji or Beymoji to share when she wins. Of course you can’t use all these Beyonce Emoji on your iPhone or Android, but you can save the image above and send that instead.

Watching the 2014 VMAs live is the best way to see performances from the top pop performers and see who wins the MTV Video Music Awards.

With a long list of performers like Jessie J, Nicki Minaj and Ariana Grande delivering the first live Bang, Bang performance and Sam Smith crooning along side Taylor Swift and many others there will be plenty to watch and to share.

When it comes to MTV VMA performers, The Cleveland Plain Dealer expects Beyonce to dominate just like Justin Timberlake did in 2013, with Jay Z along as well. The publication also expects a lot of twerking. Even though there is no Miley Cyrus performance planned for the 2014 VMA awards Nicki Minaj will be on stage at least three times.

You can also expect a huge performance from Taylor Swift of the Shake it Off single as a big promotion for her new album 1989.

After the show MTV will put the top 2014 MTV VMA performances online on MTV where you can watch them again, or catch them for the first time.

You can check out the top 2014 VMA music videos in each category in our previous coverage or watch the 2014 Music Video of the Year nominees below.