The 2016 Chevy Cruze is a great small sedan with impressive fuel economy, a sharp look and the best in class technology that includes a 4G LTE hotspot, the ability to start your car from your phone, plus support for Apple CarPlay and Android Auto.

Chevy completely redesigned the Cruze for 2016 with a larger design that offers surprisingly good legroom in the rear and a new engine that promises up to 40 miles per gallon on the highway.

Buyers will love or hate the Auto Start/Stop technology that automatically turns off the engine when stopped to improve fuel economy.

The Chevy Cruze is available in four trim levels and the older style is still on sale as the Cruze Limited. 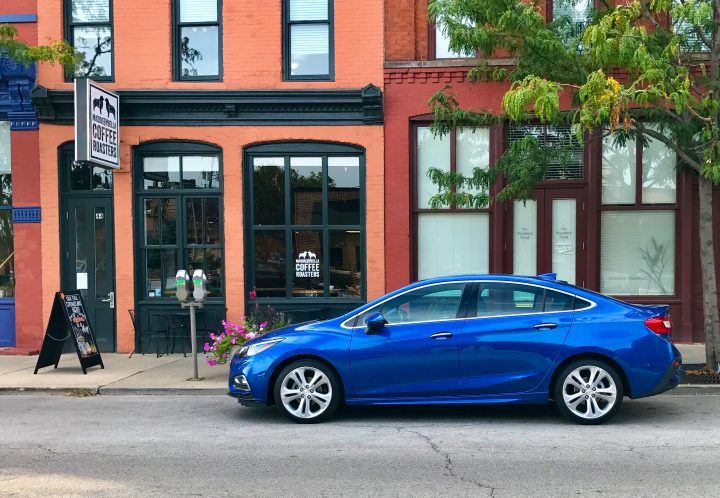 The 2016 Chevy Cruze looks good and delivers a lot of technology in a fuel efficient package.

With an all new look and set of features the 2016 Chevy Cruze delivers a very strong value to consumers looking for a car with great gas mileage that doesn’t look or drive boring.

Although it is a small or compact car, the Cruze feels much larger inside and doesn’t leave the driver or passengers cramped. 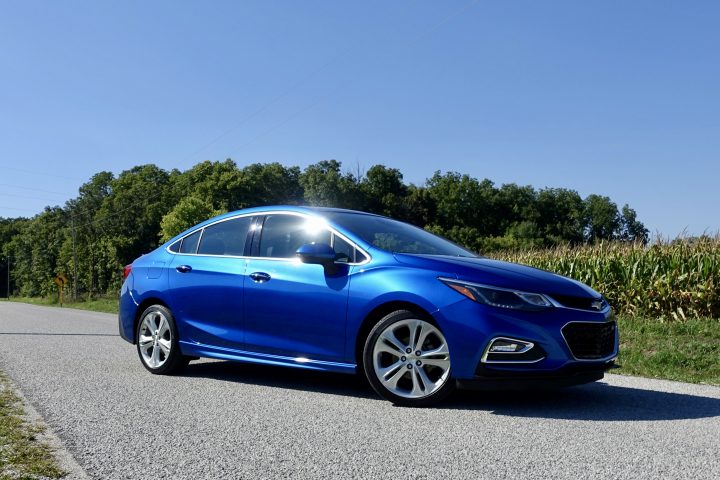 With these upgrades our Chevy Cruze Premier retails for $29,035. The Enhanced Convenience Package and Driver Confidence II packages offer a lot of value even without adaptive cruise control. 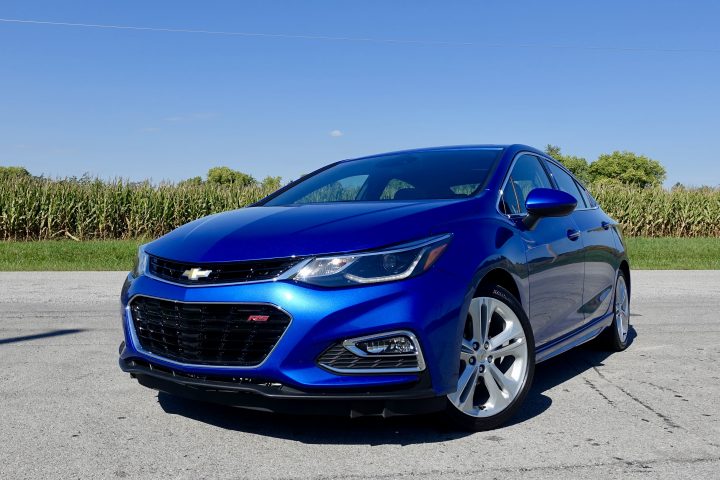 The Chevy Cruze is fun to drive and is easy on your wallet with good fuel economy.

The 2016 Chevy Cruze drives nicely with a quick six speed automatic transmission connected to the new Turbo 1.4L engine. The engine shifts smoothly for the most part and felt in line with what you’d expect on a more expensive car.

Handling is quite good and acceleration is better than expected. There’s a decent reserve of power available for passing on a highway, so you can easily overtake a slower car.

Handling is very responsive and the Cruze Premier proved fun on winding roads and capable of maneuvering through tight corners in the city. It would be nice to see a sport mode with paddle shifters.

There is only one engine choice for 2016 and it comes with Auto Start/Stop technology that you cannot turn off. When you stop in traffic or at a light the engine will turn off, and when you lift your foot off the break or traffic moves the car will start again. The system works well and we never felt the urge to turn it off. The car starts in an instant with a small amount of engine noise.

When the Cruze stops, the climate control reduces the fan which cuts into the car’s ability to cool the interior while stopped. It’s a very smooth system, but if you cannot adjust to it you should look for a different vehicle.

The 2016 Chevy Cruse Premier fuel economy is rated at 34 mixed, 30 city and 40 highway. That’s pretty close to what we saw during our week with the car. With a city-heavy week of driving and no real effort to maximize fuel economy we ended the week at 30.7 miles per gallon. During a highway trip at 60 miles per hour we stayed close to the 40 miles per gallon rating.

Buyers looking for good fuel economy without giving up features and comfort definitely need to drive the Cruze. 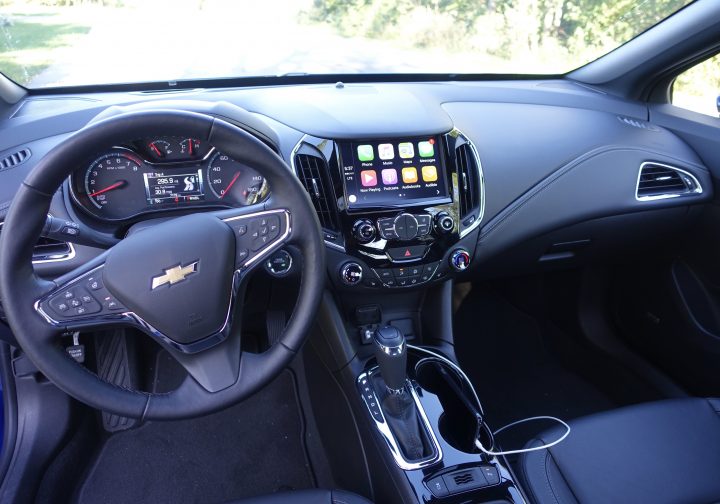 Outside the 2016 Cruze borrows from the style of the Volt with a wedge shaped front to help with fuel economy. Strong lines and a dominating grill help this car escape a boring compact car look and deliver a sharp look.

Inside the 2016 Cruze Premier I was immediately impressed by the leather interior and comfortable driver seat. My wife was not a fan of the stiffness in the passenger seat, but liked the heated seat feature. With the amount of leather and soft-to-the-touch material in the Cruze Premier you may think you’ve stepped into an entry level luxury compact car. 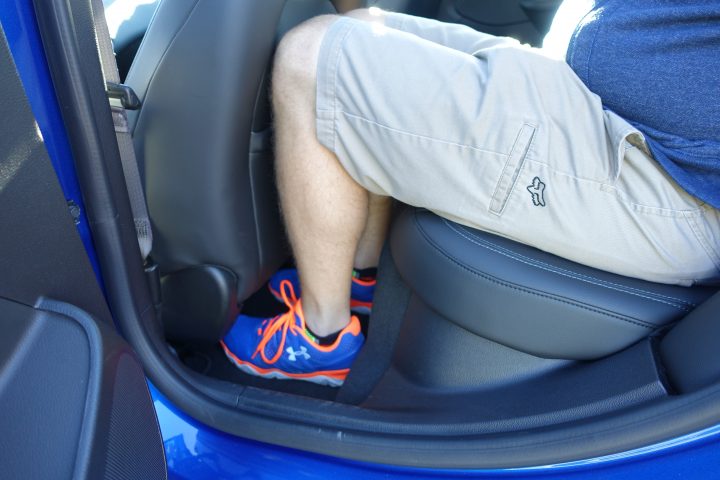 There is a decent amount of legroom in the Chevy Cruze.

The backseat now offers more legroom for 2016, allowing adult passengers to sit without feeling cramped or asking the front passengers to move seats far to the front of the car. The rear seats are heated on both sides, which is a very nice touch.

There is only one 12 volt power point in the front of the car, but with the Enhanced Convenience Package there is a standard power outlet in the back that allows you to charge phones, laptops and other items.

There is a USB port to connect direct to the car and a 3.5mm line in connection. This package also includes wireless charging, but the need to slide the phone into a pocket limits what devices you can charge. 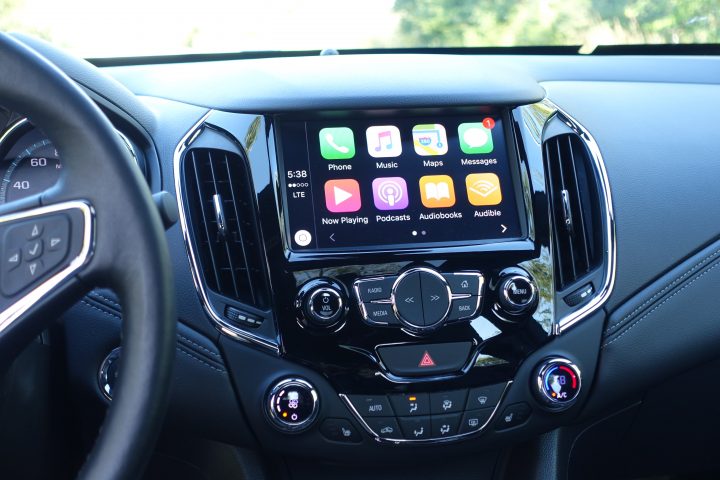 The Chevy Cruze is packed with technology, but it doesn’t overwhelm you if you don’t want to use it all.

The 2016 Chevy Cruze is packed with technology, and you can choose to use all or just some of it depending on your needs.

We love the 4G LTE connection in the car that can act as a hotspot to keep passengers connected while on the road. Imagine connecting your laptop or your kids’ tablets to the connection for a long road trip.

A smartphone app connects to the car’s 4G LTE connection to allow users to remote start the car, lock and unlock doors and sound the horn and flash the lights. The app also shows you how much fuel is left, oil life, tire pressure and fuel economy.

When you plug in an iPhone or an Android phone running Android 5.0 or higher you also get access to Apple CarPlay and Android Auto. These take over the screen with a look that is similar to your phone with access to Siri or Google voice control and a variety of apps and navigation.

Chevy includes Lane Keep Assist, which will steer you slightly into your lane if you start to cross either line on the road. This is not  autonomous driving, but it will help keep you in your lane. The vehicle also includes blind spot monitors that greatly simplify driving on a multi-lane highway and forward collision warning alerts.

The one feature we would love to see is adaptive cruise control, which can keep you a set distance from the car in front of you without the need to make manual adjustments to speed.