The New 2017 Forte5 is gains an upgraded exterior inspired by the Kia Optima, a new seven speed dual clutch transmission and new driver assistance features as well as the option to use Android Auto or Apple CarPlay connectivity.

Kia announced the new Forte5 at the North American International Auto Show in Detroit, along with the 2017 Forte Sedan and the Kia Telluride concept showcasing a smart SUV.

Sticking true to the European styling of the earlier models, the 2017 Forte5 adds a new bolder look with a wider “tiger nose” grille and redesigned headlights. New taillights round out the upgrade on the rear and users can get LED daytime running lights and LED taillights standard on higher trim models. 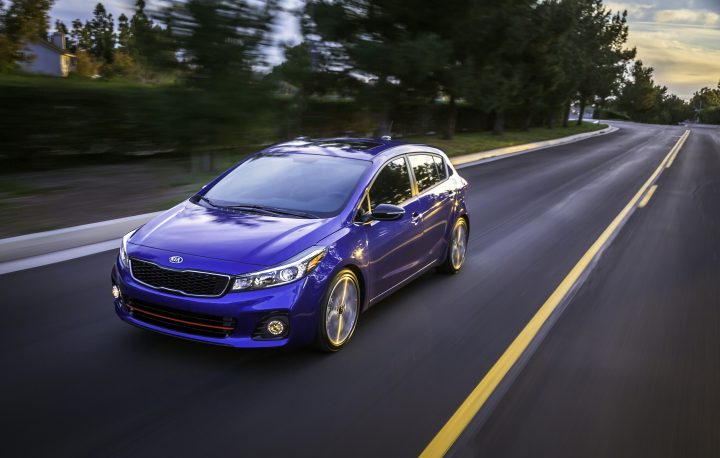 Buyers who opt for the entry level 2017 Forte5 LX can now add Blind Spot Detection with Lane Change Assist and Rear-Cross Traffic Alert. These driver assistance features are now available as an option across all trim levels.

The 2017 Forte5 EX gains the most upgrades over last year’s model. There are now LED tailights, leather seats, heated front seats, push button start with Smart Key and perimeter approach that turns on lights when you get near the car.  UVO eServices are now standard and the infotainment system includes Android Auto and Apple CarPlay, with CarPlay launching later in the year. The information appears on a 7-inch color touchscreen.

Android Auto and Apple CarPlay offer smartphone apps and connectivity on the screen while you are driving. The video above shows the two systems in an on dash environment.

Upgrade to a 2017 Forte5 SX to add on 18-inch alloy wheels, new front and rear styling with red accents and dual exhaust tip finishers. There is also a new Orange Color Pack that includes orange leather sear inserts and contrast stitching on seats and the shifter.

Kia will announce the 2017 Forte5 price and fuel economy information closer to the release and will also announced 2017 Koup details later.