The 2017 Kia Forte Sedan delivers an upgraded powertrain, new look and a technology upgrade that includes Apple Carplay, Android Auto and a plethora of smart options and safety features.

Subtle design changes appear as you look at the Kia Forte sedan, and under the hood there is a new 2.0 liter 4-cylinder engine that Kia promises will deliver better fuel efficiency and performance. Kia also adds a new sport option with the S trim.

Kia revealed the new 2017 Forte Sedan at the North American International Auto Show in Detroit along with a new Telluride concept and an upgraded Kia Forte5 hatchback.

Visually the new 2017 Kia Forte Sedan includes a new bumper and “tiger nose” grille as well as new headlights. With a facelift the front of the new Kia Forte Sedan offers a new set of options to users include a sophisticated look and an aggressive and sporty look. Buyers also get new taillights and optional LEDs. 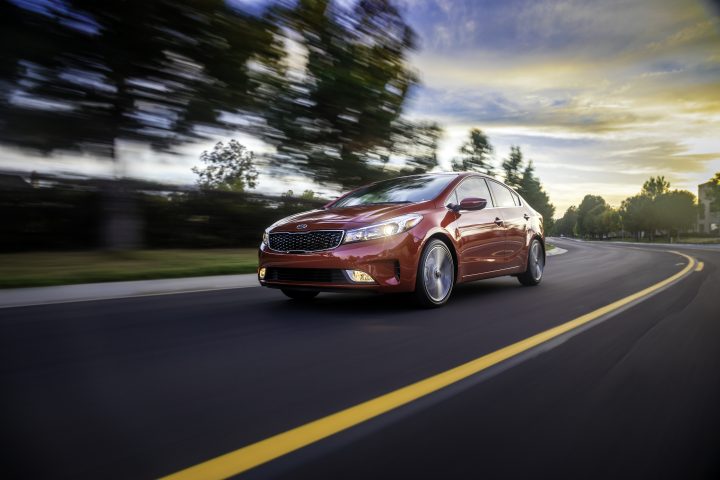 Kia will sell the 2017 Forte Sedan in three trim levels, LX, EX and a new S trim option for 2017. Buyers who opt for the 2017 Kia Forte Sedan S trim level get the following upgrades;

The Kia Forte Sedan EX trim is still the top-level option that comes standard with LED taillights, a Smart Key with perimeter approach that can turn the lights on as you approach and 17-inch wheels. While driving the lights turn slightly to focus on the direction you are steering so that you can see better around corners and bends in the road.

Interior upgrades for the LX and S trim levels include improved cloth options and black seats with white stitching option for the S trim and a leather wrapped shift knob and steering wheel. The EX includes as standard; leather trim heated front seats and a 10-way power controlled driver seat with two memory settings and a Smart Key.

Some trim levels come with Kia navigation options. All levels include the ability to switch between Normal, Eco and Sport Mode while driving.

Pricing and fuel economy numbers will be available closer to the sale date in the first quarter of 2016.