As a leaked advertisement for its upcoming Black Friday event reveals, GameStop is pulling out all the stops in getting gamers in stores to spend money. Upcoming deals included everything from copies of the upcoming Battlefield 4 for just $29.99 to offering pre-owned iPhone 3Gs devices for $89.99.

All told, the deals in the advertisement, which was leaked to GottaDeal.com, indicate that GameStop is preparing for an all-out assault on user’s wallets in time for the holiday shopping season.

Discounted electronics include a Nokia Lumia 520 smartphone for $89.99, pre-owned 5th generation iPod nanos for $49.99 and pre-owned Samsung Galaxy S3s for $249.99. While the Nokia Lumia 520 and the 5th generation iPod nano are already pretty low, that price for a Galaxy S3 with no contract is sure to get users in the door. A Samsung Galaxy S3 without a two-year contract costs users around $370 on Amazon. 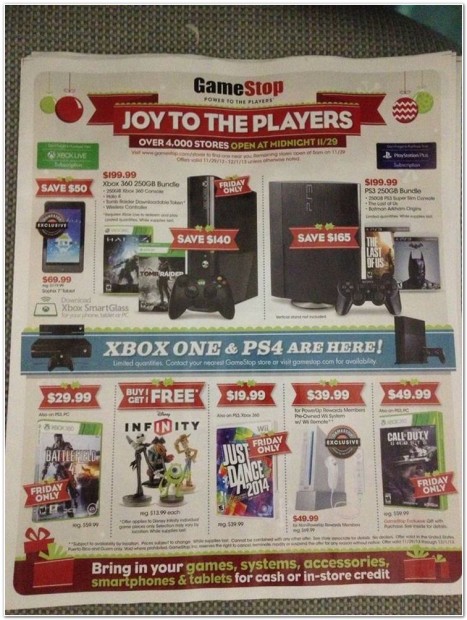 The Cover of GameStop’s Black Friday ad, leaked to GottaDeal

The company’s deals are even more aggressive in the gaming hardware category.  A pre-owned Xbox 360 Kinect sensor will sell for just $24.99 while a pre-owned Nintendo Wii with Wii Remote will set users back just $49.99. An Xbox 360e bundled with a 250GB hard drive, one wireless controller, Halo 4 and Tomb Raider will cost just $199 — $140 dollars lower than it normally would. Users who buy two of any pre-owned product will get a third pre-owned product for free. A PlayStatoion 3 with 250GB of storage, a wireless controller, a copy of The Last of Us and Batman: Arkham Origins will cost users just $199. Users who trade-in anything for a limited time will get 30% more trade-in value than if they traded it at any other time.

Games will also be aggressively discounted on Black Friday. Beyond Two Souls will cost users just $39.99 while Call of Duty: Ghosts will run just $49.99. GameStop also discounting the Disney Infinity: Starter Pack for Nintendo 3Ds users to just $59.99. Normally the pack sells for as much as $74.99. It’ll also have “select Xbox 360 and PlayStation 3” games available for just $4.99. These titles include Halo 3, Borderlands, Fallout: New Vegas and the PlayStation version of L.A. Noire.

Unfortunately, users will have to get up pretty early to get their hands on a few of these deals. GameStop will open 4,000 of its locations at midnight on Black Friday, and the leaked ad indicates that the $199 250GB Xbox Bundle will only sell for its discounted price on that day. The rest of the advertisement will run through December 1st.