Wahoo! There’s a touchscreen laptop shootout over at the Computerworld Corral between the Fujitsu LifeBook T4410, HP TouchSmart tx2z, and Lenovo ThinkPad T400s. Interesting test as it looks at two different touchscreen technologies – Wacom’s dual digitizer in the Fujitsu and N-Trig’s DuoSense in the HP and Lenovo – and two different form factors – two convertibles and a standard clamshell. Certainly, more informative than comparing two convertibles with the same digitizer. 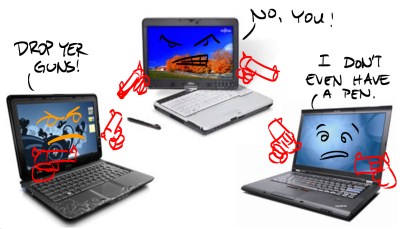 Which one wins the shootout? Well, I’ll leave that for their review to reveal, but no surprises, no one walks away from a 3-way showdown unscatched (unless you let two of the guys shoot it out then pick off the one who survives, but that’s not how it happens in The Office)