Facebook is everywhere these days, and the company isn’t slowing down anytime soon and actually looking to integrate even deeper into the daily lives of smartphone users. With Facebook Messenger now being a standalone messaging app taking on WhatsApp, Google Hangouts, and more. Today, Facebook announced a brand new app for Android called Hello that builds on Messenger and its calling capabilities.

This morning Facebook revealed a new app for Android called Hello. Simply put, it replaces the stock dialer and phone app on your Android smartphone, and aims to make your device smarter while making calls. Essentially being a phone app, caller ID, and more all in one.

The goal behind Facebook’s Hello dialer is to take over our Android phones even more. They want you making calls with Hello, which uses Facebook Messenger to make calls over the internet or WiFi, rather than your carrier minutes. You don’t always have all your Facebook friends in your contact list and don’t always know who is calling, so Hello is here to fix that problem for the few that actually have it.

While I personally won’t be trying out Facebook Hello, it’s a brand new app that actually has a lot to offer and aims to make our Android phones smarter, safer, and easier to use while making and receiving phone calls. You can block known numbers you don’t want calling you, or bad numbers on a block list. It features a rich and intuitive caller-ID feature pulling from your own contacts, and your Facebook friends, and even has some neat tools to instantly find details about a business, and then call it.

Our Android phones have a dialer app built by Google or the manufacturer, like Samsung, but just like text message apps or keyboards you can change the dialer out too, if you’d like. Meaning you can replace your phone app with Facebook Hello, and enjoy the features mentioned below.

• See who’s calling you, even if you don’t have that phone number saved in your phone.
• Easily block unwanted calls.
• Automatically block calls from numbers that have been blocked by a lot of other people.
• Search your phone contacts and people and places on Facebook, without switching between apps.
• Always have the latest info about your contacts, including their profile pictures and birthdays.
• Open a Facebook profile or Page with just one tap.
• Call and text for free with Messenger.
• Call, add and edit contacts — just like you do on your phone.

The biggest headline feature here is the integration of Facebook into your contacts, in a sense. You don’t always know who is calling, or have the number of all your friends on Facebook. And while some may not want them all in a contact list, you don’t have to. With Hello you’ll see who is calling if they’re in your device contacts (like Gmail contacts) and if they’re a friend on Facebook you’ll get the info too, even if you don’t have their phone number.

Users can share their number and info, and Hello will share caller details. You’ll see their Facebook photo, see if they’re a friend, how many mutual friends they have, where they work, and more. All according to what that user shares on his or her Facebook account. Essentially this is delivering Facebook profiles and information into phone calls. Making your Android smartphone even smarter. 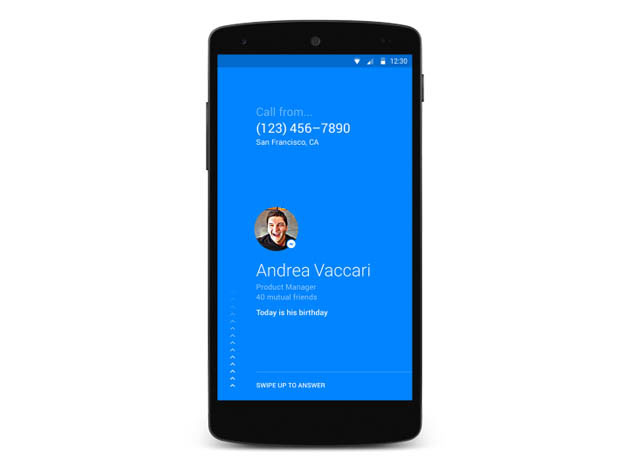 If that friend has an upcoming birthday, invited you to an upcoming event, or other things, that will also be displayed on the incoming call as shown above. It’s a neat idea, but only for those who are deeply invested into Facebook.

You’ll know if this is a friend, an acquaintance, if it’s that persons birthday and more all right on your dialer app during an incoming or outgoing call. It’s a neat idea, but we’re not sure who actually needs this. You can even search for a friend and call them right from inside the app, even if they aren’t in your friends list.

Another key feature is call blocking. With Facebook Hello you’ll be able to see a list of blocked numbers, or how many times any particular number has been blocked. Meaning if you receive a random call and it has been blocked often, you’ll be notified and know not to answer. Then of course, add it to your own blocked calls list so you won’t be bothered again.

From your settings, you can block specific numbers and adjust whether you want to automatically blocks calls from commonly blocked numbers. Blocked calls go straight to voicemail and can be reviewed in your recent calls.

You won’t have to switch between apps to make a call and the person isn’t in your contacts, as it pulls from all contacts on your SIM, your Gmail or contacts account, and your Facebook friends. Another nice touch is being able to search for people, friends, or even a business. From here you can see a profile, learn about a business, and call them all in the same app with the tap of a button.

Users can search right inside the app for a friend, or a business a friend told them about, and instantly get all the information they need and make a call. This is nice for finding a nearby business, its hours, and then placing a call.

Overall Facebook Hello doesn’t do anything that you can’t already do, it just makes some of it easier for most users. That, and it integrated Facebook even deeper into our smartphones and lives than ever before. So far it all looks good on paper, but reviews on the Google Play Store are mixed. Download Hello and give it a try today.