This week Apple Pay arrived along with the update to iOS 8.1 and is set to finally deliver mobile payments to the general public. And while it has its share of problems, more banks are joining the initiative, but what’s even more important is how this will draw publicity to a service and technology that’s readily available in millions of Android devices already. Google Wallet Google Wallet and NFC.

Whether it was the push-back from carriers in the United States, the implementation, or other reasons, Google Wallet didn’t take off. However, Android users have been enjoying the feature using a similar NFC based mobile payment system for more than three years. It’s continued to grow without a lot of publicity, but that’s all about to change thanks to Apple Pay.

By now, you’ve all probably heard about Apple Pay, but what many don’t know is that millions of Android smartphones already have NFC features and can use Google Wallet to make the same transactions. In fact, now that Apple Pay is going to be accepted at over 220,000 retail locations, this means over 220k and more places will also accept Google Wallet. Read on for more details, and why Google Wallet beats Apple Pay.

Apple Pay has been all over the news lately, and is set to be a huge deal once it continues to rollout for more retail locations, banks, partners and more. This also means we’re also about to see a lot more from Google Wallet. In fact, Mashable states that Apple Pay is essentially going to help Google kickstart Google Wallet back up, and they’re planning a major marketing push for later this year, and in 2015.

Google hasn’t really advertised Wallet much over the past three years, but they’ve continued to improve it, and things are about to change. Below are a few reasons why Google Wallet Beats Apple Pay and the iPhone 6, and why Google Wallet could be just as successful, or more, than Apply Pay.

While Apple Pay is surely going to be extremely popular, secure, and used all around the world eventually, Android users can enjoy it too. In fact, millions and millions of Android smartphones and tablets already support NFC, the system being used by Google and Apple. Devices like the Samsung Galaxy series, Note devices, Motorola smartphones, HTC One, and almost every mid-range or better smartphone released over the past few years.

NFC is in almost all new Android phones, and now that carriers can’t control (or shut it down) like they did in 2011 and 2012, millions of Android users can simply download Google Wallet from the Play Store, add payment options, and use the same extremely simple, safe, and secure “Tap n Pay” system everywhere that it’s accepted. This is mostly supported with all Android 4.4 KitKat devices.

Google Wallet doesn’t use the same token system as Apple Pay, but we’re not going to get into security or privacy for now. They both have awesome implementations, but Apple Pay may have the upper hand with the newer token system, vs Google knowing where you buy, and what you buy with Google Wallet.

That being said, Google Wallet already beats Apple Pay simply because it’s available on millions and millions of smartphones, not just the iPhone 6, and many users have been enjoying it for years. Like myself.

A huge part of Apple Pay is all the banks, retailers, and outlets that have partnered with Apple. Bank of America, Starbucks, and over 220,000 retailers in the United States have NFC readers that will accept mobile payments like Apple Pay and Google Wallet. However, the support list is still quite small for Apple Pay, and many small time banks aren’t on board.

If you use a local bank, Credit Union, or aren’t using one of the big banks supporting Apple Pay, you’re out of luck. However, with Android this doesn’t matter. Google Wallet accepts all bank accounts, all credit and debit cards, and works with any and all banks. It’s completely open.

This doesn’t count all the loyalty cards, gift cards, coupons (yes for you extreme couponers) and everything else you can use with Google Wallet that was briefly mentioned in the video above.

We get it, paying for things with a smartphone can be scary. Not to mention if your phone battery dies or it gets lost you’ll be worried about it. Thankfully Apple Pay uses TouchID for security, and Google Wallet has a security PIN before you can use it.

But there’s something else. The Google Wallet Card. While this doesn’t work the same as the Google Wallet app, it can be loaded with funds from any of your accounts in Google Wallet, and is a physical card you can use as a backup. 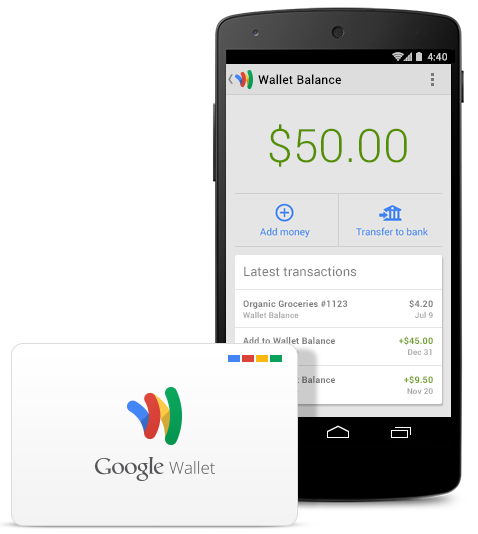 The Google Wallet card works at millions of places just like a MasterCard, and that includes swiping it at ATM’s for cash withdraws. It syncs to Google Wallet and you’ll even get notifications and alerts each time you make a transaction to keep track of all your purchases. This means there’s a mobile payment solution like Apple Pay, as well as a physical solution for those times you leave your phone in your car, or any other scenario where a physical card would be ideal.

Google Wallet also works like PayPal, and you can send friends funds right to their Gmail and Google Wallet account in seconds, all for free. There are no fees like Paypal. There is actually a lot to love about Google Wallet, it just isn’t widely know at this point. Thanks to Apple Pay, that should soon be changing.

I’m not for one vs the other. Both are awesome features for each operating system, and will hopefully move forward mobile payments as the year ends and 2015 kicks off. Apple Pay has its advantages with NFC tokens to protect privacy, TouchID, and the power of Apple behind it, but Google Wallet is no slouch either.

That all said, a lot of retailers still don’t support NFC payments, but they have the tools in place. Local fast food places like Jack in the Box, my local Best Buy, and many more all have them, but they aren’t enabled. At least not yet. With Apple Pay on the map and shaking things up, this is good news for both Apple and Android users across the board.

With the release of Apple Pay comes more adoption of NFC payment solutions, which will benefit merchants, retailers, Android and iOS users everywhere. AT&T, Verizon and T-Mobile offer an NFC payment solution called Softcard (formerly known as ISIS) that works similar to Apple Pay as well, so there are multiple options, and things are just getting started.