3 Ways the ThunderBolt Beats the iPhone when Traveling

I use both a Thunderbolt on Verizon’s 4G LTE Network and an iPhone 4 on AT&T’s 3G Network. The HTC Thunderbolt  is a much more satisfying travel companion than my iPhone 4. I’ve been both to the test on my family’s summer road trip across the southeastern states.

There are three primary reasons why I’ve been happier with my HTC Thunderbolt than iPhone 4 during the trip. 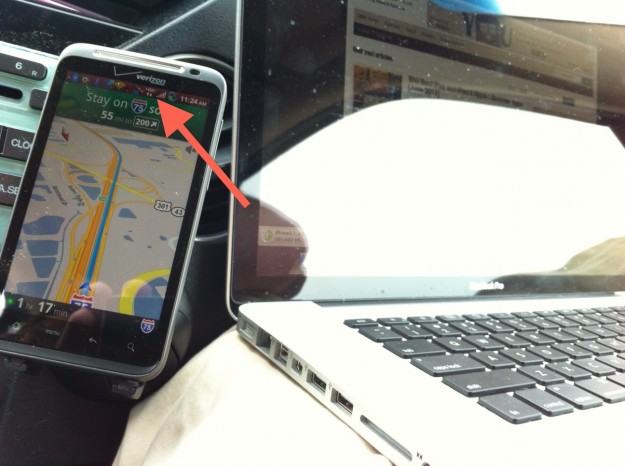 We spent the first half of our trip mostly in the boondocks of northern Alabama, Mississippi and Louisiana. For the first four days my Thunderbolt rarely found a 4G signal. Despite the lack of 4G, Verizon’s 3G network had enough of a signal that we were able to use it for simple things like driving directions, email, and satisfying my wife and oldest son’s terrible Facebook fixation.

As you can see in the image above, my HTC Thunderbolt is now operating with 4G. As I write this we’re driving through Tampa, FL. I got my first solid taste of Verizon 4G LTE in Mobile, AL. It is fast!

AT&T’s dead spots on this trip have been larger and more frequent than Verizon’s.

The HTC Thunderbolt with Verizon fast 4G and more ubiquitous 3G access made general use and wireless tethering a great companion on this trip.

I’ve used my iPhone and a combination of the built-in Maps app, Navigon’s MobileNavigator, and a few times other GPS apps. This week, I posted some great iOS road trip apps, since we still have three iPhones in our family.

The Maps app is okay for a quick trip and I really like to use it for finding things when I’m in one place. While in Navarre, FL we found a great Bayou Cuisine place and had some tasty Gator Bites, thanks to the built in Google Maps app on an iPhone.

However, using the iOS Maps app for driving directions for more than a mile or two is not convenient. You have to buy  GPS app to if you want spoken turn-by-turn directions.

Android comes with a great built-in Google Navigation app. It’s accurate, fast and has vocal directions that are easy to understand. The app also integrates nicely with any other apps. For example, this morning we checked out of our hotel in Tampa and needed gas. On my iPhone I could fire up Gas Buddy and find a cheap station. It only opens the built-in Google Maps app to find the gas station. That’s okay if you have someone to read off the off the turn-by-turn directions. There is no simple way to integrate an app like Gas Buddy with a third-party navigation app like Navigon. 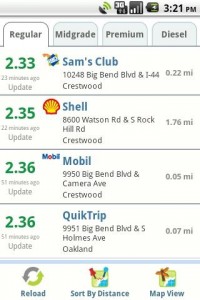 On my HTC Thunderbolt I fired up Gas Buddy and found a station that was 10 cents cheaper than the one on the corner near the hotel. It was a mile down the road in the direction we were traveling to Ft. Myers, FL. We saved about $1.70 just on this one fill-up and were able to use the Android Navigation app. Why is it so much better than the built-in iOS Maps app or even a paid app like Navigon?

The combination of the HTC Thunderbolt and Android has been a pleasure on our road trip. Apple has a long way to go to catch up in this key area for travelers.

One weakness that Google’s Navigation app has is the inability to add interim destinations. For example, we are driving to Ft. Myers, FL but we want to stop at Venice Beach. We had to replace Ft. Myers as our destination with Venice Beach instead of adding it to the whole trip like you can do in Navigon. If there is a way to do this in Android’s app, I’d love to hear about it.

One big limitation is the poor battery life of my HTC Thunderbolt. My iPhone will last at least 50% longer than the Thunderbolt. You could fix that with a car power charger or a case like the soon-to-be-released Power Skin case. It claims to offer double the battery life while the case is on the device. 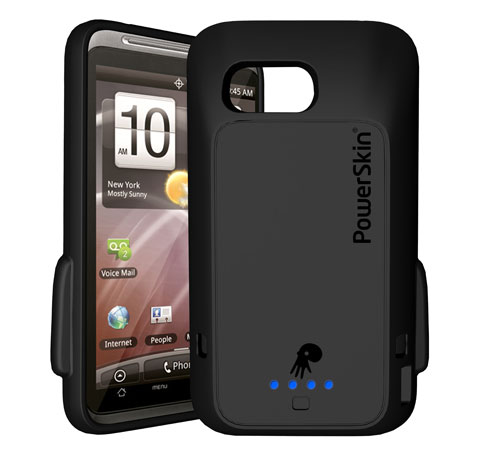 I have found that the battery life of an iPhone is also lower while traveling due to the use of GPS and if you use it as a Wi-Fi hotspot.