If Facebook is a life diary, Instagram a repository for low resolution and filter-blasted images, Twitter a public SMS database, and Google+ a Twitter meets photo network, then Yahoo is clearly differentiating its Flickr service as a serious tool to photographers that is more accessible now than ever. At a New York City unveiling last night, Yahoo debuted new features, such as 1 TB of free storage, a re-designed app and web experience that are more photo-centric, and a hub for photo storage and discovery. With these features, Yahoo’s Flickr can be a serious threat to photo sharing networks like those of Facebook, Instagram, Google+, and Twitter. 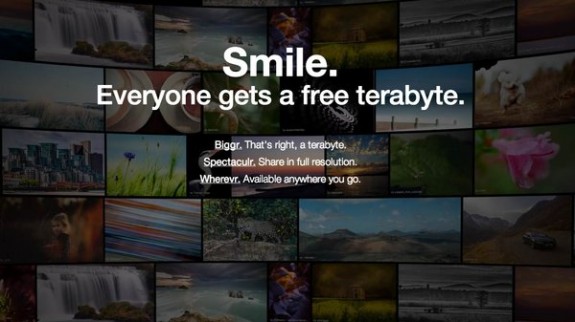 The problem with existing photo sharing networks–even if they advertise unlimited free storage–is that they downsize photos when you upload them. Google+ offers a new combined 15 GB free storage of photos and emails while smartphone uploads are downsized to a lower resolution. Facebook also downsizes photos while Instagram’s filter-bombed images are really more akin to Polaroid of yore for fun rather than for memory preservation. With 1 TB of storage for free, Flickr is a clear winner here as serious photographers can upload full resolution images without worrying that their memories will be downsized.

With these capabilities, you can use Flickr to backup and archive your photos or you can use the service to share images with others.

And unlike Facebook, you don’t have to be worry about who owns the rights to your photos.

While galleries on Google+ and Facebook are simple experiences arranging photos in a grid over a white background where you can tap on a particular image to enlarge it to full screen, Flickr went with a classier dark background and a more modern UI design. As a result, photographers can show off their work through the Flickr app. The company redesigned an Android experience that allows for an attractive way to show clients and models as a digital portfolio. A redesigned app for iOS is coming and Flickr does have an app for Windows Phone, though that client hasn’t been updated since Windows Phone 7.

Yahoo may have found its own niche with Flickr once again. The service could usher Yahoo back into relevancy as a major, competitive social network that’s led by photo sharing. Sure, we’ve heard that before with Instagram, but Flickr promises full resolution images that Grandma could download from her phone or computer halfway around the world whereas Instagram is more of an amateur show that doesn’t allow for downloading.

Yahoo is likely hoping that professional photographers would lead the charge. How awesome would it be to be friends with famous photogs on Flickr and view and comment on their photos? Perhaps some of your photographers may allow you to download some of their pictures for use as a screensaver or background?

Google had recently introduced some new photo experiences as part of its Google+ update at I/O that makes it easier for the casual photographer to have amazing images. Automatic edits can be applied to photos on Google’s servers to make your images pop with more pizzazz. Google can stitch together panoramas from separate shots automatically, create motion GIFs if you take a series of shots in succession, and make your images appear professionally edited. These intelligent algorithms make photography less daunting to the casual smartphone photographers, and that’s something that the new Flickr still lacks.

For now, though, 1 TB of sharing and the ability to connect and discover great photographers and photographs could make Flickr an unlikely, but fierce challenger not just as a photo storage site, but as its own social network that’s centered around the picture experience.