A new battery technology that took top prize in Intel’s International Science and Engineering Fair could allow smartphones to charge in as little as 20-30 seconds.

The project, Design and Synthesis of Hydrogenated TiO2-Polyaniline Nanorods for Flexible High-Performance Supercapacitors, was the brain child of Eesha Khare an 18 year who has her eyes set on using the $50,000 she won for her project at the fair to fund her education at Harvard University, consists of a small capacitor that when paired with a small battery could end the hour or long charging times of most consumer electronic devices like smartphones and cameras. 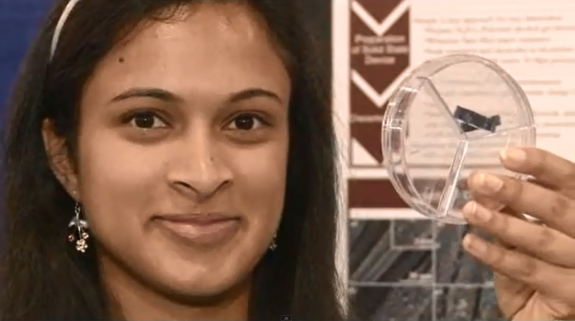 Esha Khare with her super capacitor.

Khare says that she currently has plans to evolve the technology ever further, however she doesn’t go into any detail on what that might be. In its current form the technology can withstand around about 10,000 charging cycles as well, also making it head and shoulders above what today’s batteries can do. Most rechargeable batteries only have a 1,000 charging cycle limit before they begin to rapidly break down and need to be replaced. There’s also no actual battery acid to speak of –the battery is completely solid state so it’s also more environmentally friendly than today’s batteries as which tend to leak corrosive acids if not properly disposed of.

The current version of Khare’s battery technology is used to power LED lights, however ultimately it will have the ability to be thin and pliable, possibly making a great fit for use in the smartwatches and wearable computing devices of tomorrow.

Having to remember to recharge a device daily is one of the huge hurdles that company’s focusing on wearing computing –that is technology that attempts to blend into user’ everyday lives, will have to contend with. It would be far easier to convince someone to depend on something like Google Glass or Apple’s rumored iWatch, if those devices only required charge times of seconds instead of hours. Today’s smartphones typically take about an hour to fully charge.

While Khare has been contacted by Google, according to SlashGear, she’s made no solid plans to sell the technology to any at this point. Patents uncovered yesterday did confirm that Google-Motorola has been looking into creating its own smartwatch.