Verizon has just officially released a list of some smartphones that have now reached their end of life. These models are now discontinued from Verizon and the carrier will likely continue to sell through any remaining inventory before making way for new devices.

There are two items on the list that are of note. The first is the 32 GB Galaxy S3 smartphone. While Verizon still carries and is still selling the 16 GB base model, it’s likely that the 32 GB model with a higher price tag due to increased storage capacity isn’t doing as well and the carrier doesn’t want to be stuck with huge inventories of the 32 GB Galaxy S3 once Samsung releases the Galaxy S4 model.

Another item is the Droid 4, which offers an excellent keyboard in a slider form factor that harks back to the original Motorola Droid. The Droid 4 was considered a high-end keyboarded smartphone with 4G LTE network support and multi-core processing power when it was released. Since then, many consumers have shifted their attention away from keyboards to larger and bigger screens, and the Droid 4’s end of life may mark the end of keyboarded smartphones in the high-end space. The Samsung Stratosphere II, considered a mid-range model, remains the sole keyboarded Android smartphone on Verizon’s lineup. 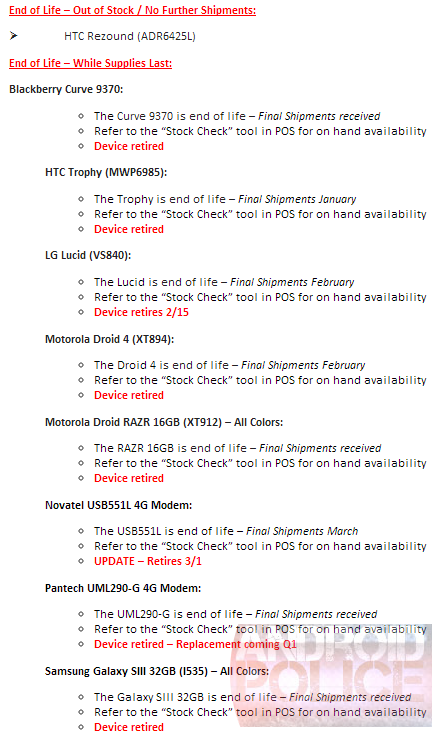 Other devices that Verizon is retiring include the HTC Trophy, BlackBerry Curve 9370, LG Lucid, Motorola Droid RAZR 16 GB, Novatel 4G USB modem, and the Pantech UML290 modem. These models were found on a list posted on Android Police.

The Casio Commando, a ruggedized 3G Android smartphone, will also be seeing its end of life on May 15th. It’s unclear if Verizon and Casio will bring a rugged 4G LTE successor. Rival carrier Sprint had announced that it will be carrying the Kyocera Torque, a 4G LTE rugged smartphone on its network.

With so many devices now gone, this leaves the doors open for Verizon to make some new device introductions. Some rumored phones that are coming to Verizon include the much-rumored Galaxy S4 from Samsung and the HTC M7, some new BlackBerry 10 devices, and a new high-end Nokia Lumia smartphone with PureView technology. The carrier also recently picked up the Galaxy Note 10.1 with LTE and the Samsung ATIV Odyssey smartphone.