At Apple’s New iPad announcement Tim Cook bragged that Apple now has 362 Apple Stores worldwide. People will be lining up outside of these stores in many countries when the new iPad launches on March 16th. The stores aren’t there just to create nerd lines on iOS device launch dates. Apple stores contribute a lot to the Apple bottom line and the stellar customer service reputation.

The Apple Store experience puts a face on the corporation. Instead of talking on a phone to a low paid phone center worker in an international location, customers walk into the store and speak to a person, face to face. 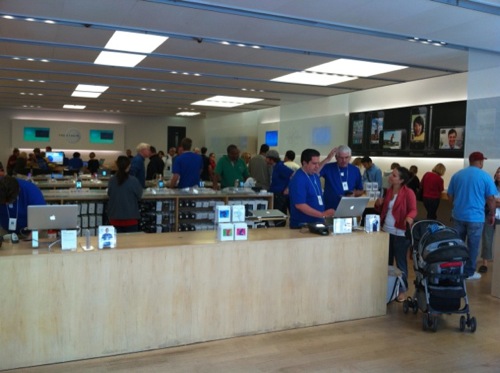 Over the years I’ve taken multiple iOS devices to the Genius Bar, the term used to describe the support center in the back of the stores. The Geniuses, Apple support personnel, were always friendly and helpful, even on the one occasion they didn’t really help me. I took my youngest son’s iPod Touch in because it failed due to water damage. They didn’t replace it, but they did give me a refurbished one at a discount.

Last summer I replaced my iPad 2 because of a damaged dock connector. I don’t think I broke it, but they told me they don’t replace broken dock connectors because they consider it user damage. Despite the policy they did replace my 64GB iPad 2 for free instead of charging for a new one. I’ve also walked in with a broken sync cable and they replaced it without having to scan anything or even ask me questions about it.

The Apple Store gives great customer service. They also give an excellent experience for shoppers who want to test out the latest Apple products, like the new iPad. Once the frenzy dies down March 16, potential buyers can play with a New iPad for as long as they like. The store will always have plenty on hand to test.

If you buy a product, you always have the option to come back to the store for one-on-one training. They will make appointments to show you how to use basic features in addition to using advanced power-user tools like Aperture or Final Cut X.

The only store that comes close to this kind of  service comes from Microsoft. They only have a few stores compared to Apple’s 362. You also have to buy service to get the same kind of walk-in support. Another similar experience comes from Sony. You won’t find many of them either.

Read: Support: Another Reason Why Retail Stores Differentiate Apple from the Competition