I think it is reasonable to say that the 3D television craze was a gimmick that quickly, and mercifully has passed. Although I’m sure there are quite a few 3D enabled TVs in homes with glasses gathering dust in some drawer. There are times I wish  3D cinema would pass into the realm of fad as well. (Personal preference alert-I avoid 3D versions of flicks when I can. The extra cost is usually not worth the supposed added visual value.) Wikipedia has a list of smartphones that offered 3D, but we don’t hear too much about that anymore either. So, I guess it only makes some sort of retail sense that we start talking about 3D Tablets. 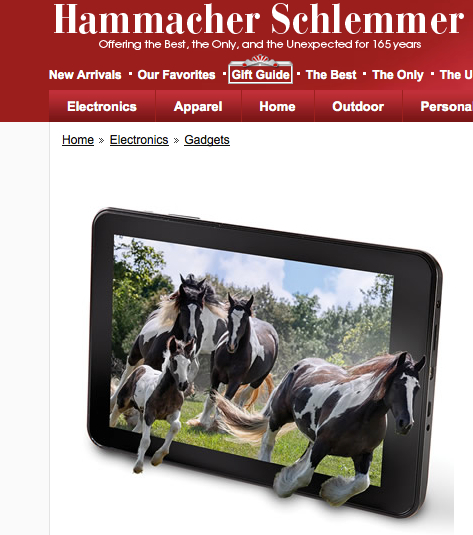 Hammacher Schlemmer seems to think so. The popular catalog of hard to discover and often bizarre items is listing a 3D Tablet as “The No Glasses 3D Tablet.” It’s an 8 inch Android Tablet running Android 4.1 with only 16GB of storage unless you add an SD card. The product description claims that will let you store an impressive amount of content. I’m not sure where you’re going to be getting that 3D video for your mobile device. But not to worry, the technology here doesn’t really depend on content manufactured for 3D. Similar to the Nintendo 3DS, there is a parallax barrier layered on top of the screen that sends a different image to each eye, thus creating the illusion of depth. You can also view straight up 2D content. Battery life is only rated at 5-7 hours and the device weighs lb.

The 1280 X 1080 Tablet also comes with a wireless keyboard and all of this will set you back only $350. But if you’re one of those excited by the possibility of a 3D Tablet, with a catchy name like “The No Glasses 3D Tablet” don’t look for this under your Christmas Tree. The expected ship date isn’t until December 30.