It looks like Google and hardware partner Asus are readying a version of the company’s popular $200-priced Nexus 7 tablet with built-in mobile broadband connectivity. Sources say that a version with 3G/4G Internet connectivity could launch as soon as within the next six weeks, placing the tablet’s debut between now and mid-October. At debut, the Nexus 7 tablet with 3G will likely have to compete against Apple’s 7.85-inch iPad Mini, which has been rumored to have a launch date sometime in October. 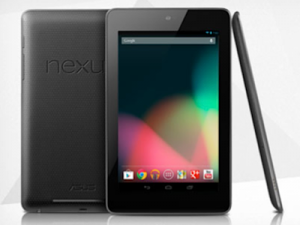 According to PhoneArena, it’s unclear if the wireless mobile broadband connectivity will appear in the form of 3G, 4G HSPA+, or 4G LTE. It’s also unclear what regions(s) Google will make this tablet available in and when the announcement would happen. It’s also unclear which carriers the tablet will support. Right now, the Galaxy Nexus smartphone, made by Samsung, is available unlocked for GSM carriers AT&T and T-Mobile USA as well as subsidized with LTE for Sprint and Verizon Wireless.

The benefit of a 3G/4G tablet is that not only do you have instant-on, but you’ll have ubiquitous connectivity anywhere where you have access to the wireless network of your carrier of choice. With a WiFi-only tablet, you’re stuck to a wireless hotspot or you’ll have to juggle your devices and tether and manage battery consumption as a result of tethering.

Pricing for such a model will likely be higher than the $199 base price for the 8 GB tablet. According to MoDaCo, there are no hardware changes with the 3G variant aside from the inclusion of the modem. With Apple’s iPad, the company charges a $130 premium for the embedded 3G/4G mobile broadband radio.