While Tegra 3 is formally referred to as a quad-core ARM architecture system, NVIDIA wants to clarify that there are technically five cores in its chipsets that will be powering the next-generation smartphones expected to launch at Mobile World Congress. The chip-maker has trademarked the term ‘4-PLUS-1 quad-core architecture.’

So what’s the fifth core? NVIDIA explains that the four main cores are used to handle more intensive tasks–such as handling games, Adobe Flash video playback, or encoding or decoding high definition videos. The fifth core is a low-power core that is used to handle more basic tasks, like retrieving email or operating in standby mode, which will help the device save power when all that heavy processing power isn’t needed. 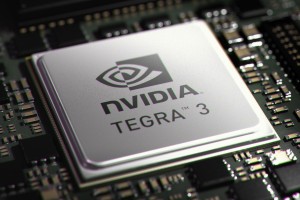 Tegra 3-powered phones from NVIDIA will be rivaled by dual-core offerings from Qualcomm. Qualcomm has boldly stated in the past that its new high-performance dual-core Snapdragon S4 chipsets will outperform rival chipsets with quad-core architecture. Mobile World Congress will host a nice battlefield and we’ll see if 2012 will be the year of quad-core. Apple, which also designs its own proprietary ARM-based chipset for use in its mobile computing product, is more recently rumored to be building a high-performance A5X chipset, rather than a quad-core A6, for its rumored iPad 3, speculated to be announced in early March. Intel is also entering the race with its Atom-based Medfield processor, which is a single-core chip clocked at 1.6 GHz.

We’ve described Tegra 3’s unique architecture in a number of ways since its launch back in November 2011 – as variable symmetric multiprocessing, as having a “companion core” or as wielding a “ninja core“.

Today, we’re officially calling it the 4-PLUS-1 quad-core architecture and trademarking the name.

The reason is that, the more popular this technology became, the more our customers wanted a name for it that’s unique and descriptive. A name they could put on a box or a store sign that immediately represents its value.

What this revolutionary architecture does is simple: It provides both exceptional processing power and great battery life. It does this by using four powerful CPU cores to handle demanding tasks, such as gaming, and a fifth low-power, battery-saver core to manage less strenuous tasks – like processing e-mail or operating in standby mode.

Don’t be surprised to see it turning up more and more in devices at next week’s Mobile World Congress and beyond.

And while Prince Rogers Nelson initially changed his stage name to Prince and then to TAFKAP (the Artist Formerly Known as Prince) when he took up a symbol combining elements of male and female symbology, 4-PLUS-1 is here to stay.

You can learn more about it in our whitepaper on the technology, which has just been updated.