Redbox and Verizon are hooking up to create a streaming media service to compete with Netflix, Amazon, Hulu and the like. The partnership, announced today, is not well detailed to keep rivals from knowing their plans ahead of time and moving swiftly to cut them off.

According to Fast Company the partners will offer a subscription service and some tie in or leveraging of Redbox’s existing kiosk service, which allows for $1/day DVD rentals and are usually found in Walmart stores.

This market is starting to get cramped, but that doesn’t mean there isn’t room for a company to rise up and defeat all challengers. In order to do that Redbox will need these four things — I doubt all of them are possible. 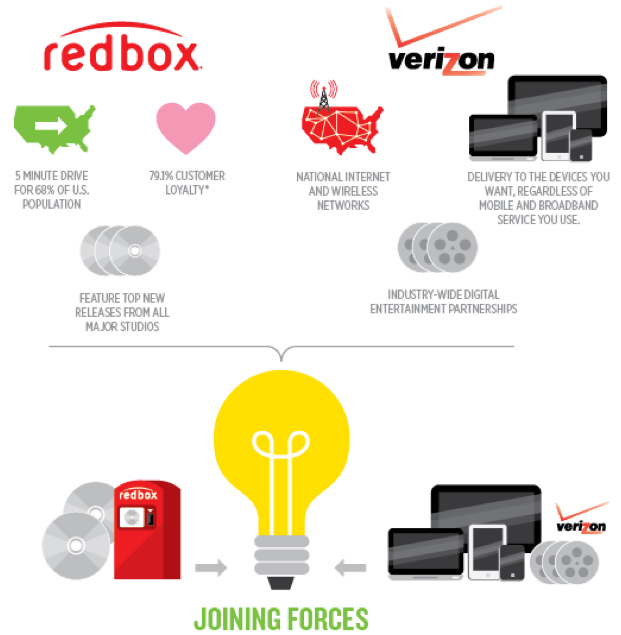 1. Offer more television episodes and put them up fast

The weakest link in many streaming services is the ability to bring the TV shows customers want to them in a timely manner. The day after broadcast is a reasonable amount of time to wait (not 8 days), but if someone promised that streaming would begin 3 hours after broadcast there would be an explosion of joy.

Also, a service that offers more TV episodes than is currently on offer will get a lot of attention. Don’t just focus on the big four networks. The audience wants cable shows day after broadcast, too. More than what any of the streaming services offer at present.

Drag premium channels to the party. People will pay to stream Dexter, Boardwalk Empire, Homeland and the like. Especially if they don’t have cable.

People want to begin streaming movies as soon as they’re available on DVD. They may even pay a heftier subscription fee if they can do so before said movies are out on DVD.

Regardless, don’t make people wait months and months or years for a movie to show up on your service.

It would be awesome if I could arrange all of my evening’s streaming into one continuous playlist so I could truly lean back and not have to touch the remote until everything I want to watch is complete.

This would be especially useful for times when I just want to watch all the new episodes of my favorite shows at the end of the week. Instead of watching one, backing out to the main menu, finding the next, watching that, then repeating the process, a good streaming service should offer me the ability to add a bunch of videos to a list that automatically moves through each. A really good service would auto-create a playlist for me of new eps from shows i have an my subscription queue.

Plus, it would give users the option to play through a list of episodes in order when watching just one show.

4. Offer streaming on as many existing devices as possible from launch.

The companies clearly stated that customers of this service would be able to enjoy media “whenever they choose, using the media and devices they prefer.” A good start. This needs to be more than empty words. When launched, this device should work on any smartphone or tablet up to 2 years old in addition to existing set top boxes, gaming consoles, and all computers, including those running Linux.

Launching on just a few devices and updating compatibility in increments is bunk (Netflix!) and restricting the service to just one mobile device is even more bunk (Amazon!). Don’t make the same mistakes.

Redbox and Verizon have the opportunity to create a service that will change the video streaming landscape. Sadly, I suspect that all they’re aiming to do is clone what’s out there. If not, let’s hope they take some of this into consideration.