This past week Apple acquired WiFiSLAM, a creator of indoor location-based software that can be installed on portable electronic devices… including smartphones. Apple’s purchase of WiFiSlam cost $20 million, according to The Wall Street Journal, and it could act as a blueprint for new features coming to iOS 7.

Sure, Apple only just confirmed that they made the purchase, and features from WiFiSlam might not arrive until well after iOS 7 drops, however there is always the chance that the company could integrate a few indoor location features sooner. In practical terms the WiFiSlam technology makes providing navigation inside buildings as easy as whipping out an iPhone and finding where the nearest security office, Apple Store or rest room is. 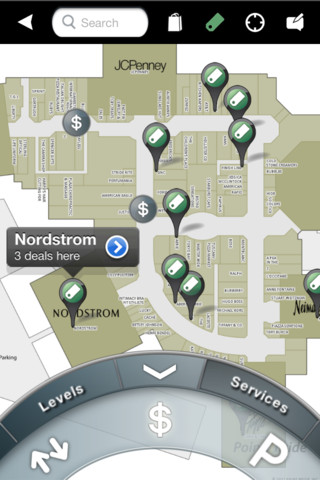 If Apple’s usual cadence of releases still holds true, the next version of iOS (the operating system that powers millions of iPhones, iPads, iPod Touches and possibly iWatches) will make its debut sometime this June during Apple’s annual World Wide Developer’s Conference.

Though novel, Apple wouldn’t be the first to make indoor navigation a priority. In 2011, Microsoft’s Bing search engine added Bing Mall Maps, a service that allowed users to navigate 400 malls across the United States in real-time using their phone’s GPS settings. As its effort is built using HTML5, users can access the information in iOS, Android and Windows Phone.

Point Inside, a company who publishes a mobile app for iOS and Android that provides indoor tracking similar to Bing Mall Search, has also been around since 2009. In addition to providing the navigation for 750 malls and outlets, it also provides navigation information for 100 airports across the planet.

Even Google has toyed with indoor navigation concepts. Google Maps 6.0 added floor plans of airports this past year.

So why is this technology so important for mobile devices? For retailers it’s all about building relationships with customers. That’s according to an interview with Point Inside CEO, Josh Marti by Mobile Commerce Daily.

“Mobile is about taking the ‘digital’ part of retailing into the store where more than 90 percent o of retail happens”.

Other than retail, here’s some of the ways Apple could use WiFiSlam in iOS7 to change the nature of doing business an up the ante on personal navigation.

For that baseball fan whose feeling the itch to grab a few hotdogs, drinks and not miss that homerun. Getting around Yankee Stadium and being able to quickly return to a seat or rush to the bathroom before a favorite pitcher takes the mound is key.

For many, the more information they have at their fingertips, the better they can shop. If a user is looking for the shoes, location services built into iOS could get them to the nearest Footaction before they sell out.

Tastemakers could make that trip to the local cultural center that much more immersive with experiences that track your exact position and keep users informed about the sights and sounds around them. The Cleveland Museum of National History already does something similar with its ARTLENS app for iPads. Inside the museum’s exhibits, patrons have access to audio recordings, and playlists created by other museum goers. WiFiSlam’s technology could communicate what’s important about a painting in real-time.

Each year large events like the Consumer Electronics Show and Mobile World Congress demand that visitors quickly navigate cavernous conference centers to reach appointments and sessions. Users could use indoor navigation to get to that next exciting appoint with public relations staffers as easily as tapping in their destination.

Imagine a user of a WiFiSlam-enhanced iOS 7

An iPhone user who has never been to Seattle-Tacoma Airport could easily make it to their connection flight to Chicago’s O’Hare Airport without getting lost on the way. Real time navigation could even give users an estimate of when they’ll arrive to a gate.