The iPhone 6 Plus is an awesome phone, but most universal car accessories don’t fit the larger size of the phablet. That’s why we scoured the Internet for some awesome accessories for the phone and we found the 5 Best iPhone 6 Plus Car accessories. We have personal experience with these recommendations, so you can buy them with confidence that they rated high in our reviews.

The list below includes a couple of car mounts, a way to charge the phone plus another device, some protection for the phone and a couple of items to keep you going both in and out of the car. 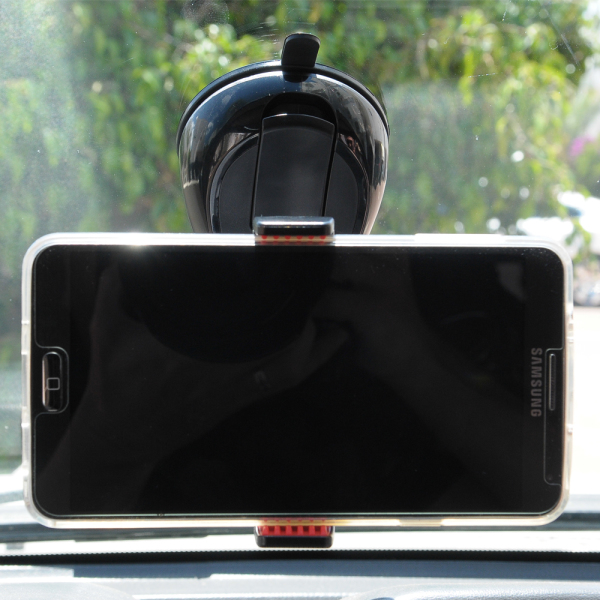 We’ve tried a number of car mounts for our smart phones over the years, but the best by far comes from Winnergear. The Montar Universal Car Mount by Winnergear ($29.99) fastens to a dash or window and snugly holds the large iPhone 6 Plus or other phablet sized phones. It grabs hold and doesn’t let go of the surface the user mounts it to, or of the phone. It’s easy to push the phone into the car mount with one hand and just as easy to get it out without scratching the phone. The rubber-lined claws grip the phone safely so it won’t damage the edges of the iPhone 6 Plus. 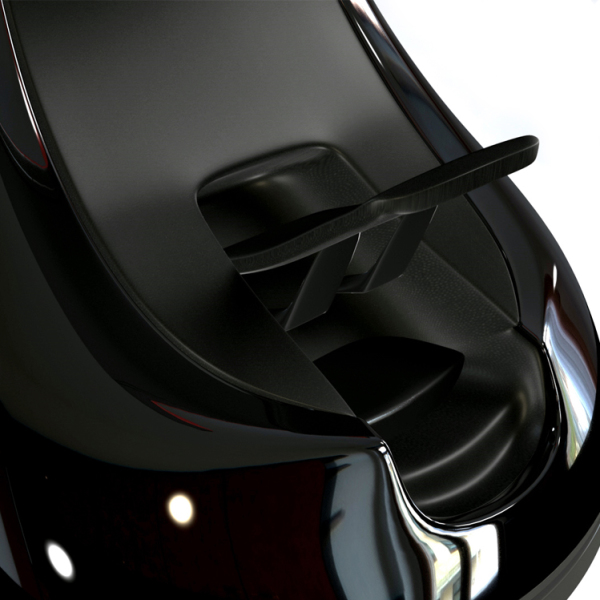 The mount grabs the windshield or dash thanks to the powerful suction mechanism that also releases quickly when the user flips up the lever as seen above. This keeps the phone in place. In a couple of months it never once fell off the mount. 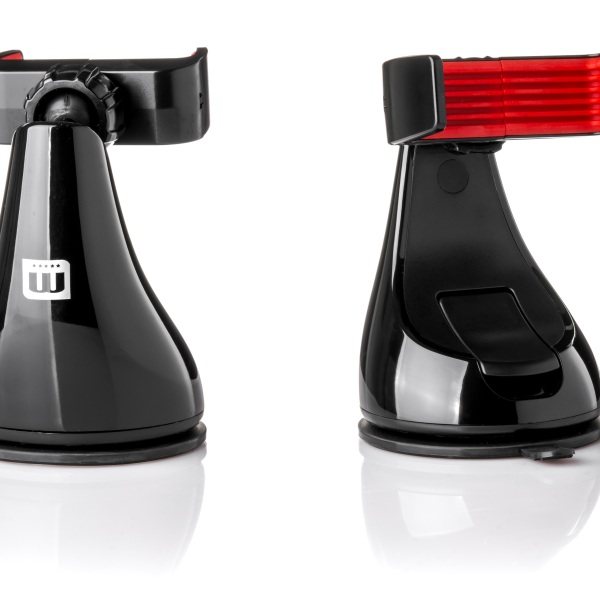 The head which holds the phone will swivel around thanks to the ball mechanism on back of the claw that holds the phone. The user can easily adjust the tension to move the phone so the driver can see the screen for maps. It will hold the in portrait or landscape, making it a great solution for watching a movie while waiting to pick someone up. Please don’t watch video while driving, however.

The iPhone 6 Plus can charge the battery quickly thanks to the fast charge capability Apple put into the phone. The Incase High Speed Dual Car Charger with Lightning to USB Cable ($39.95) takes full advantage of that.

The charter uses two USB ports that can charge any phone and will charge a tablet as well. For the tech minded both ports use 2.4 Amp ports. The included Lightning to USB cable measures 3 feet long. An LED indicator tells the user when the charger’s getting power from the car’s 12V DC outlet.

It’s a bit longer than some, but two fast charging ports means users should forgive the large size.

Buy it directly from Incase using the link above or from the Apple Store. Look around online because we’ve seen it for less, but not from mainstream retailers. You could save some money if you’re not risk averse.

Putting a screen protector in a lineup of car accessories may not make sense to some, but good protection will save a phone used in industrial vehicles or anyone’s car. This gets more important the more clutter a person carries around in their car, especially if those objects include lots of sharp or metal objects. If a driver leaves their phone loose on a dash or the seat next to them, and then slam on the breaks or accelerate quickly to avoid an accident, and the phone might go flying. Good protection keeps the owner from needing a new iPhone at full price before their contract runs out.

People already know about getting a protective case, but don’t forget to protect the screen. We’ve got a couple of options. One from Zagg reviewed recently here at GottaBeMobile by our editor who loved it. He wrote:

The Zagg InvisibleShield Glass screen protector took the damage instead of my iPhone 6 Plus.

Those who don’t like attaching things to their dash or window like the Montar mount above should look at the Kenu Airframe+ car mount for phablets like the iPhone 6 Plus. The Airframe+ expands wide enough to hold the larger iPhone 6 Plus thanks to a spring-loaded clasp. On the back a cross-shaped part on the back attaches to a car’s vent easily. It holds on well. 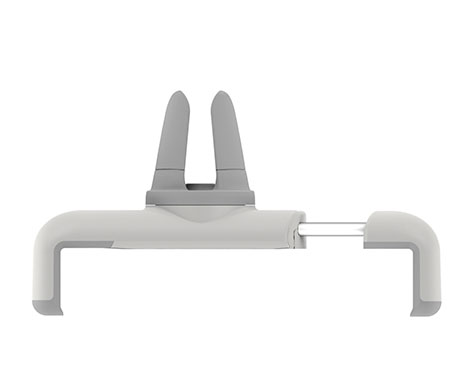 Quickly pull the phone off the vent using the Airframe still attached to the phone. Slide a credit card into the back slots and use it as a travel stand at a coffee shop or on a desk. 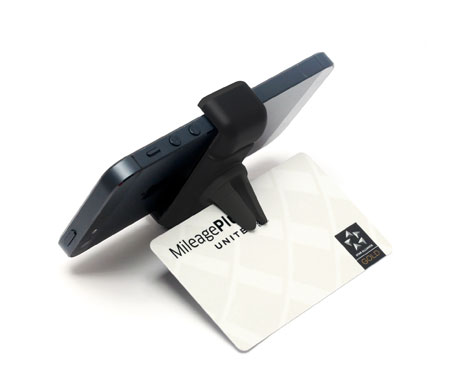 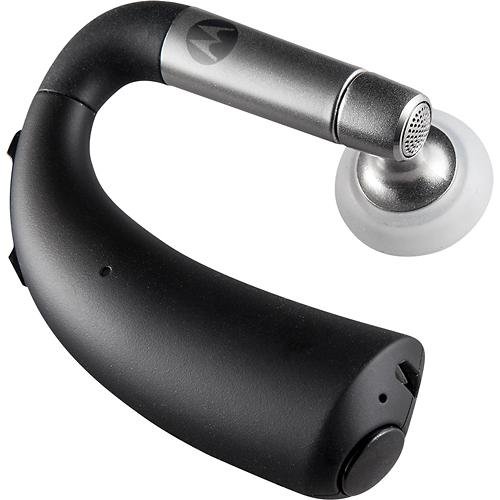 Most cars come with hands free Bluetooth these days, but people who own an older car or who didn’t get one should consider a Bluetooth headset to wear in the car while talking. It’s best to leave the conversations for those times when the user’s stopped, but sometimes a person has to take a call. We haven’t found a good dedicated car Bluetooth device we like, so go with something like the Motorola ELITE Sliver II Bluetooth Headset. It’s one of the best, thanks to great sound, comfort and long battery life. Plus the carrying case also charges the device via a micro-USB, thanks to a built-in battery. Snap the headset into the case for a perfect fit and the battery in the case starts charging the headset. Plug the headset into the second port on the Incase High Speed Dual Car Charger we mentioned above to keep it topped off while driving around. Then unplug it and take it with you. 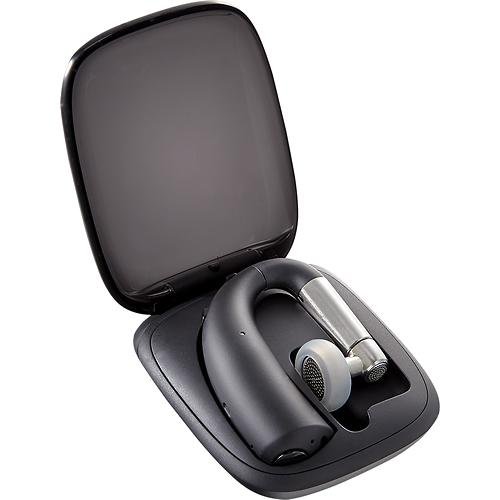 The Motorola ELITE Sliver II Bluetooth Headset goes to sleep once the user puts it back into the case. This will save the device’s battery. It’s easy to quickly open the case swivel the ear piece to turn it back on and put it in your ear. It fits over the ear to make sure it won’t fall off.

See our review of the first generation of this product.