If you’re looking for Destiny tips to level up, you’re in the right place. With the right combination of Destiny tips and a dedication to leveling up faster in Destiny you can quickly jump from a new player with practically no rank and limited skills to a level 20 Destiny player working on Engram farming and other higher-level Destiny upgrades.

Destiny is unlike Halo and many other shooters that simply hand over new weapons and skill as you progress. Instead you need to earn XP, collect new gear and choose to upgrade your skills. All of this leads to the desire to level up faster in Destiny.

With these Destiny tips to level up faster you’ll be able to scream through the early Destiny ranks and move on to the legendary ranks and start your quest to reach level 30 through Light, Legendary Exotic and Ascendent gear.

Use these Destiny tips to level up faster.

It was easy to level up in the Destiny beta, but in the full game you’ll want to use these Destiny tips to level up faster without wandering all over the world looking for XP and other upgrades.

Here are the Destiny tips that Gotta Be Mobile staff is using this weekend to level up faster in Destiny so that we can explore more of the Destiny universe and catch up to our friends who’ve been playing or much longer.

The best Destiny tip to level up faster is to use bounties. When you are in the Tower Watch you’ll need to visit Xander 99-40 to get bounties. There are many Destiny Bounties split between the Destiny universe and the Crucible, which is the multiplayer mode. You’ll need to reach level 4 before you can take on any Destiny Bounty.

You can only take on five Destiny bounties at once, so choose wisely. Some of these are easier to complete than others. So look for a collection of Destiny bounties that you can complete quickly off the bat. This will allow you to level up quickly thanks to large rewards.

Group Bounties and Missions into One Go

One of our Gotta Be Mobile team members is already reaching Destiny level 25 without an insane amount of time playing Destiny thanks to going after Destiny bounties in a smart way. He recommends picking bounties that you can complete on a single planet or while you are working on missions. This way you can earn rewards from your bounties and while you also earn rewards from playing missions.

Play With a Higher Level Friend

If you can connect with a friend who is already higher up, or even a random player who is higher up, you can take on some higher ranked missions to level up faster. If you can team up with two friends who are ranked higher and go into strike taking on bigger, tougher enemies than you could handle alone you can level up faster. 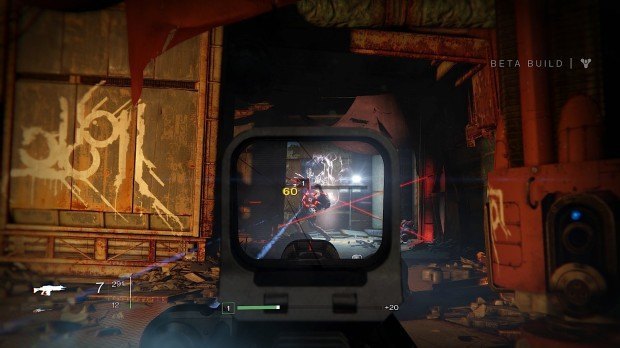 Play with high-ranked friends to level up faster.

You’ll need friends who don’t mind pulling the weight for your lower level character. Many of the enemies you’ll be facing will be hard for you to take out. While you can help the other people you are playing with will do most of the work.

Grinding isn’t a fun Destiny tip for leveling up, but if you are smart about the grind it comes faster. Grinding refers to going over and over on rather simple or repetitive tasks to earn experience points and level up. It’s an unavoidable part of any MMO, but some players feel Destiny is particularly bad about leveling up on Destiny.

When you go through the world you can look for Patrol missions. You’ll find them thanks to green beacons which allow you to start a patrol. Many of these missions are easy to complete with an assassination or capturing a plot of land.

Use Destiny Cheats and Tricks to Level Up Fast

Of course when you really want to level up faster you’ll need to look for some Destiny cheats that sidestep the rules Destiny puts in place to keep users from leveling up too fast.

We shared a new Destiny Loot cave that helps users with legendary engram farming, but if you are looking to level up faster for the early Destiny levels you’ll need to use these Destiny cheats and tricks.

The Destiny Shrine of Oryx used to allow players to quickly level up and farm Glimmer, the in-game currency, but this is now patched. Bungie continues to look for these types of Destiny cheats and leveling up tricks, but we’re confident gamers will discover more as the game gets older.