The iOS 8 jailbreak is officially out and available for all iPhones and iPads that are capable of running iOS 8. Here are five iOS 8 Cydia tweaks that work with the latest version of iOS that fix some of the iPhone’s biggest annoyances.

The Pangu dev team is responsible for this latest jailbreak and they’re a recent addition to the jailbreak community, first breaking into the scene with their iOS 7.1.2 jailbreak back in June shortly after the update released from Apple.

The iOS 8 jailbreak technically released earlier last month, but since it was a very early release and it didn’t even include Cydia, it was deemed merely a developer release so that tweak devs could get their apps and tweaks working for iOS 8. It actually wasn’t until just recently when the iOS 8 jailbreak became stable enough for public consumption.

With that said, regular users can now easily install the jailbreak on their iPhones or iPads, and Cydia has been fully updated for iOS 8, allowing users to download and install tweaks with ease. Most popular tweaks have been updated for iOS 8, but there are still a handful that need updated for the new version of iOS.

Here are five iOS 8 Cydia tweaks that are compatible with iOS 8 jailbroken devices and are worth a download in order to fix those pesky iOS annoyances.

In Safari on iOS 8, the “New Tab” lists Favorite websites, as well as Recently Visited websites. If you’re like me, you don’t need to be reminded about which sites you recently visited.

That’s where a tweaks appropriately called “Disable Frequently Visited Site” comes in handy. While some users find this section in Safari to be useful at times, a lot of users simply don’t use the Recently Visited section, so getting rid of it is something that you may want to consider. This tweak allows you to do just that.

There are no settings to adjust or anything. Simply just download and install the tweak, and you’ll see that the Recently Visited section is no longer visible in Safari.

One little feature in iOS that has annoyed me for the longest time was the fact that you had to tap Close twice in order to get rid of a notification. Not anymore!

NCSingleTapClear fixes this and allows you to simply just get rid of a notification with one tap. We can see how the two-tap system works as far as confirming the deletion of a notification and it probably prevents many accidental notification dismissals, but I rarely come across this myself, so I simply just installed this tweak and it makes my life a lot more convenient.

A good passcode on your iOS device is crucial for keeping it secure when your iPhone or iPad ever becomes lost or stolen. However, it can be a nuisance at times, especially when you’re at home when the chances of your device getting lost or stolen are very slim. 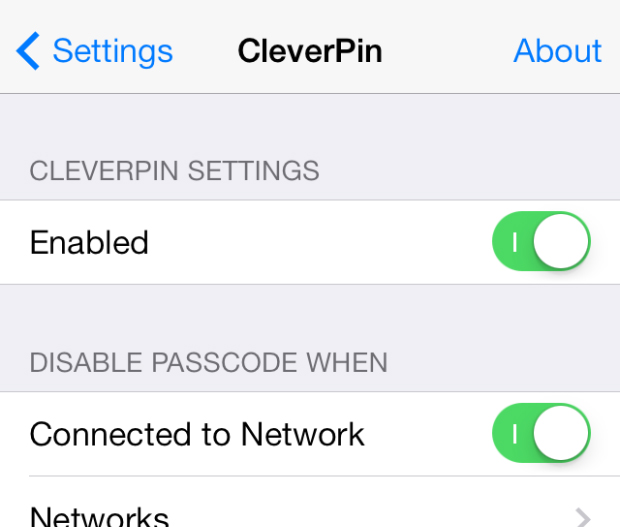 This is where CleverPin comes in. This tweak intelligently recognizes when you’re on your home WiFi network and disables the passcode lock to reflect that. Then, once you leave the house, CleverPin enables your device’s passcode lock, since the chances of you losing your device are greater when you’re out and about.

We wonder how a feature like this isn’t built into iOS, since Apple is all about convenience, but nevertheless, jailbreakers can take advantage of it right now.

Do you never turn down the ringer during the day while at work, but when it’s time to go to bed you forget to turn it back up, eventually sleeping through your alarm? I’ve been there too.

It certainly can save you from being late for work, and it has saved me several times from sleeping through my alarm because I forgot to turn the ringer back up the night before.

Springtomize is one of the most popular jailbreak tweaks around, and the developers behind the app have recently updated it to work with iOS 8. There are a whole heap of customizations that you can make to you iOS device with this app, including hiding unused apps, resizing icons, creating nested folders, changing fonts and much more.