For years, Halo was at the forefront of first-person shooters. If there was an exciting new mechanic coming, it was Halo that introduced it or improved on it to bring it to the masses. Multiplayer, level creation and cinematic story telling were all Halo’s specialties. I felt like some of that disappeared for Halo 4. Its tone wasn’t all that interesting the fourth time around. Spartan Ops provided a new avenue to get story-related details to compensate. Early on, I worried about the same tired tone and mechanics dragging down Halo 5: Guardians.

Halo 5: Guardians is the crown jewel of Microsoft’s gaming portfolio this holiday season. The company is hoping that the lure of another Halo tale will convince users to upgrade to its Xbox One entertainment console and skip the now equally low-priced PS4 console from Sony.

I haven’t played Halo 5: Guardians yet in final form, though I did get some time with Warzone during this year’s Electronic Entertainment Expo. That experience and the avalanche of information 343 Industries and Microsoft have revealed about the game have me very excited.

Halo 5’s allure starts with the story for me. Secure in its victory, the UNSC seems to have turned its gaze in on Earth and her colonies again. In Halo 4 we learned that Dr. Catherine Halsey was being investigated by someone within the UNSC for the things she’d done to create the Spartan program in the first place. In that scene she tried to spin her actions, saying that her Spartans had saved humanity, omitting the crimes she committed to create them.

Read: Epic Video Reveals all Ahead of Halo 5 Release Date

Last week’s Halo 5: Guardians trailer teases more revelations for Halsey and confirm that Master Chief John 117 is in deep space and refusing to take orders from UNSC command. Spartan Locke, a relatively new Spartan introduced in the Halo Nightfall TV show, is sent to capture him. With some catching on to John’s true origin story and more, the UNSC has declared the hero killed in action for propaganda purposes. It’s Spartan Locke’s task to bring the Master Chief in are make his death a reality, it seems.

Commanding a Team in Halo 5

Under the command of the Master Chief is the Blue Team. Equally, important is FireTeam Osiris, a new group of Spartans taking orders from Jameson Locke.

Trailers and a profile in GameInformer last year indicate that these new teams will act as a replacement for Cortana mostly. They’ll provide banter and add context to what the player is seeing on-screen. We’ve seen Buck, who last appeared in Halo 3: ODST, drop some pretty witty puns in a few cut scenes now. Each team is with the player as they’re trying to carry out the different story missions.

More important than the jokes and puns is the sense of team. 343 made co-operative play a big goal for this game. The entire campaign, from start to finish lets other Xbox Live players drop in and take over a member of Fireteam Osiris or the Blue Team seamlessly. What’s more, players can give members of their team orders when they aren’t playing with some one else. Need to commander a vehicle? You can send a member of your team to get the job done. It’s a completely new mechanic for Halo and I can’t wait to experience it.

For years, Microsoft sold users a base Halo game with access to multiplayer and a specific set of maps. Users who wanted to get the latest multiplayer maps needed to purchase them separately from the core experience. The move was understandable, these maps took extra work to complete and were designed to keep hardcore players coming back. Unfortunately, the practice hurt everyone in the long run. Online multiplayer populations for Halo still eventually declined and Microsoft forced millions into different tiers and playlists based on the maps they purchased or didn’t bother purchasing.

343 Industries is taking a different approach with Halo 5: Guardians. The studio is treating the game as a service, delivering new 18 completely new maps to users over months for free. Microsoft will balance this out with micro-transactions for cosmetic items, reportedly. How it gets there doesn’t really matter though. For months players will get new reasons to come back to Halo 5 and users won’t have to leave playlists with their friends because they’re missing crucial maps that they need to purchase separately.

Halo 5: Guardians has some Arena multiplayer, but it’s not getting a lot of attention. It’s being overshadowed by Warzone multiplayer.

Warzone sticks two teams of players into a massive online map and drops in some Covenant forces for good measure. Players in Warzone earn REQ credits by doing everything from completing the match to taking out a particularly lethal enemy. As the match progresses players can head to REQ stations to bring in some heavy artillery and weaponry. Many have compared Warzone to the multiplayer experience in Titanfall, which isn’t totally wrong, I’d say.

I don’t care how functionally similar it is to other titles, Warzone has me excited for Halo 5: Guardians. I loved the team focused massive battles in Titanfall and I think they’ll be even more fun with a Spartan that I’ve created and equipped from the ground up. 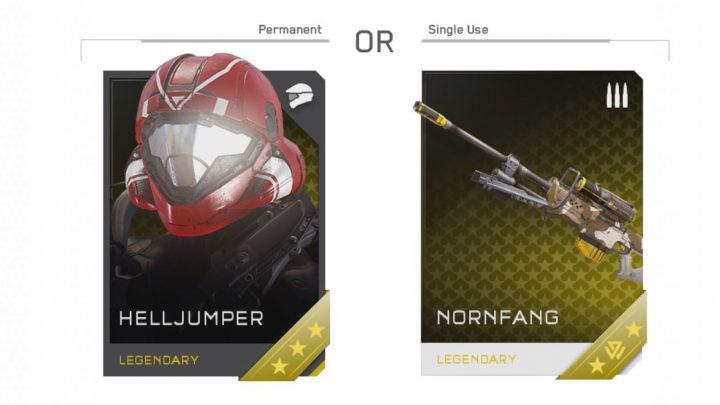 The REQ System itself is something I’m excited for too. 343 Industries best explained it in a reasonably long animated video a few weeks ago.

REQ Credits let players unlock REQ cards. REQ Cards themselves are an economy. There are common REQ cards and rare REQ Cards. REQ Cards an unlock different vehicles in the multiplayer experience or specific weapons. Most importantly, REQ Cards come in two flavors: one-time use and permanent. The permanent REQ Cards focus on customization of your Spartan and reportedly. Past Halo games let users customize their Spartan, but never to the extent that REQ Cards do. We’re talking weapon skins, visor colors, armor pieces, helmets and more. I’m very excited to run through Warzone with Spartan that I feel personally invested in.