5 Things to Do With Your New Nexus 9

If you just unboxed a shiny new Nexus 9 and want to know about everything it can do and all the cool features it has to offer, as well as get it all setup and ready for use, we have you covered. Below we’ll go over five or so things you can do right out of the box to get the most of your new Android tablet.

Google’s Nexus 9 was released back in November and is one of the best Android tablets to date. It has a beautiful 8.9-inch screen, dual front facing speakers, a pretty good camera and more, and below we’ll help you get started so you can enjoy the Nexus 9 to the fullest. From some helpful tips and tricks, a few apps to download, and even a setup guide.

The Nexus 9 has plenty to offer aside from just being a tablet you lounge on the couch with, and we want to make sure new owners whether this is their first Android tablet, or seasoned users can fully enjoy everything it has to offer. Start off with our setup guide, then read on for everything else you’ll need to know.

The setup guide linked to below is your first step. As you’ll want to sign into your Gmail account, restore apps from previous Android devices, set up all the options and settings (as well as backup) and of course set a password or pin to keep your information safe.

This is one of the most important steps of all, but once you’ve got it all finished you’ll be ready to download some apps, enjoy movies, buy a case, and much much more.

In case you’re not familiar with the Nexus 9, Google’s newest Android tablet, it’s quite capable. Featuring an 8.9-inch 2560 x 1538 Full HD display, a powerful 64-bit NVIDIA processor with 2GB of RAM, 16 or 32GB of storage, an 8 megapixel camera with image stabilization, a durable aluminum frame, front facing speakers, and it runs the latest Android 5.0.1 Lollopop software from Google.

They’ve added multi-user accounts so you can setup another login for family members or the kids, lots of options to control notifications so it isn’t always going off, a battery saver mode if you’re out and about, and much much more. Here’s what’s new with Android 5.0 Lollipop.

Starting out at $399 the Nexus 9 isn’t cheap, and you’ll want to protect it from those occasional accidents. And while the options aren’t as open as something like the iPad Air 2, there’s still plenty of choices. You can even get more out of the tablet by getting a Nexus 9 keyboard case. 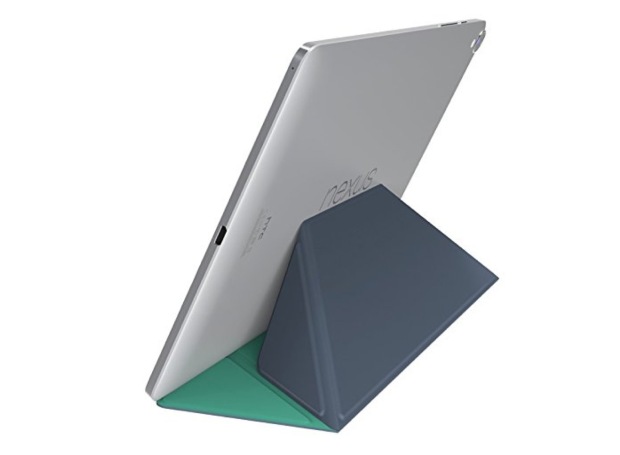 Below we’ve round up a list of seven or so of the better Nexus 9 cases and covers available today. Google’s own magic cover is probably your best bet, as it’s simple, minimalistic, and loaded with magnets that can launch the camera or sleep the screen. That isn’t the only one though, so give our list a look.

The Nexus 9 shipped with the first version of Android 5.0 Lollipop that was announced back in October, but has since seen two or so updates to address some minor issues with the software and performance. There’s an initial update that will keep it on Android 5.0 but be the final release software, as well as a bug fixing Android 5.0.1 Lollipop rolling out to all users.

It’s advised that users head into settings > about tablet > check for updates and get the latest version of Android. This will ensure the best experience moving forward, and is highly recommended.

Google’s tablet comes preloaded with a few essential apps, but won’t have all the bloatware that many other Android tablets have installed out of the box. This means you’ll want to head to the Google Play Store and start downloading everything you want and need. It already has Google Play Music to blast tunes on those dual front speakers, and Google Play Movies & TV where you can rent shows, and often get movies for free as Google’s been giving more and more away lately.

To start we’d recommend a few things like Amazon Kindle Reader for some light reading, Netflix, HBO Go, Chromecast to mirror the entire tablet screen, apps, games, or video to your big screen. Evernote for productivity, Pandora radio if you’re not a fan of Google Music, or even top apps like Clash of Clans, Asphalt Racing, and don’t forget to check out the NVIDIA Tegra Zone app. This is for devices with NVIDIA Tegra processors, which handle some of the most graphic intensive apps and games for Android, and they have a collection of some quality games worth downloading.

Of course Facebook, Instagram, Twitter apps of choice (I use Falcon Pro), NFL Mobile, Yelp, Dropbox, WatchESPN and many other things come to mind. Everyone is different, but with millions of apps to choose from, surely there’s something for everyone to download and enjoy.

Learn How to Use the Nexus 9

Those that have owned previous Android tablets should be right at home, but if you’re new, things can sometimes be overwhelming. With so many tools at your exposure you’ll want to know how to do certain tasks, rather than fumbling through settings and trying to figure things out yourself.

We have a great collection of guides we’ve been working on that you’ll want to check out. These will teach you everything you need to know. Like taking a screenshot, enabling developer options, and doing other tasks that you’d otherwise probably have to Google answers for. Below are a few of many.

Those are just a few of the questions we get asked often. Also, taking a screen shot just simply long press power and volume down at the same time, that’s another question we get asked for almost each new Android device.

There is a lot to learn, but it’s all extremely easy for anyone that has ever owned a tablet or smartphone before. Get a case, install some fun apps, mess with all the settings and controls, and get to using and enjoying that new Nexus 9.