Microsoft’s Windows 8 operating system has earned a bit of a reputation. It’s to its credit that Microsoft choose to rethink some of the ways users interact with their PC. After all, paradigms like the Start Menu had gone functionally unchanged for decades. Unfortunately, change also comes with a slight side effect: new options aren’t always easy for users to find.

Here are 5 things you possibly don’t know that your Windows 8.1 tablet, desktop or notebook could do.

Allows Users to Multitask with Two Apps Side by Side

Windows Store apps are a new animal, people haven’t mastered how to use them just yet. To be fair, Microsoft hasn’t exactly found great ways to surface all of their functionality yet either. A perfect example of this is a fix Microsoft implemented to allow users to open more than one Windows Store app, like Mail, at the same time. In Windows 7, users open two apps in a 70% and 30% ratio like snapped apps on the Xbox One. With the free Windows 8.1 update that ratio has been changed and users can divide their screen in half, or less. This allows for the same type of multitasking that’s available in desktop apps.

Wireless screen support has become something of a big deal these past few years. Forget tethering your Windows 8.1 tablet or desktop to an external display, devices equipped with the operating system can now wirelessly project what’s on their screen to Miracast equipped set-top boxes and smart televisions. Device support for Miracast isn’t robust yet, but there’s a long list of compatible devices ready for pairing with your television set. Netgear’s NeoTV boxes all have limited Miracast support but it’s best to search Microsoft’s database to see if a set-top box or television you already have is compatible.

Unfortunately, there’s no Miracast support for the Xbox One yet, though users can stream content itself directly to it using Play To. 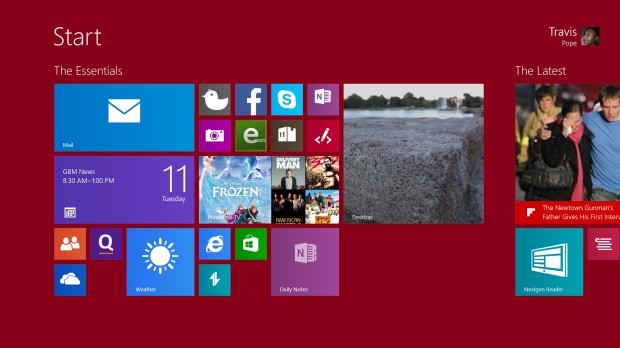 Acts As a Social Network Manger

Windows 8.1’s People Hub looks like a contact manager. To be fair, it is. However, users who have added their Twitter and Facebook account can also use the built-in Windows app to monitor those social networks for new messages. They can also send out new status updates too. The People app won’t replace the native Facebook and Twitter apps, but I suspect they’ll work well enough for most people.

Understandably, Apple made a lot of headlines when it first introduced its own streaming music service to the world. The same didn’t happen for Xbox Music, which is a shame since there are millions of users who can get ad-supported music streaming for free by just using the Music app included in Windows 8 and Windows 8.1. Users are limited to a certain amount of streaming per month, however it’s free and natively built-in. Every Windows 8.1 tablet, laptop or device can instantly be a jukebox with an internet connection.

Tablets, laptops and desktops are already sold with Windows 8.1 pre-loaded. To get the features of Windows 8.1, Windows 8 users need only head to the Windows Store and install the free update.