There are some genres that just don’t translate well to smartphones and tablets. Role-playing games were among these before the release of Order & Chaos. Now Order & Chaos 2 is here to ensure users that the original’s wasn’t a fluke.

Order & Chaos 2 tells the story of heroes after they’ve nearly met their demise because of the events that transpired at the end of the original game. Developer Gameloft has upped the ante, including new mechanics that have taken hold in mobile gaming while trying to stay true to the rather dense campaign and mechanics that made the original Order & Chaos so popular. GottaBeMobile got the opportunity to tryout Order & Chaos 2 ahead of this week’s big release for iPhone, Android, Kindle and Windows. 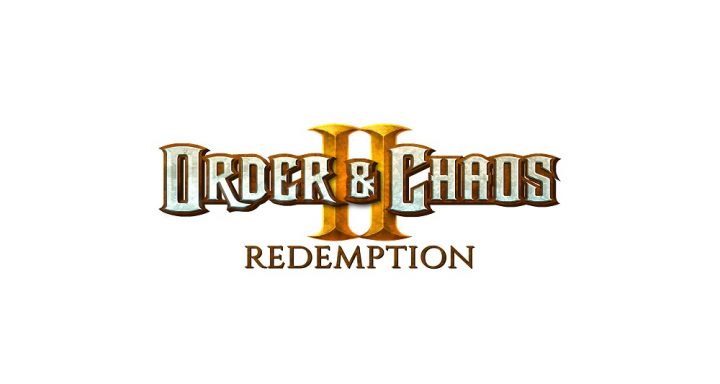 These Order & Chaos 2 tips encapsulate what we’ve learned about the game so far and techniques we’re already using to level up our hero and explore the vast game world. 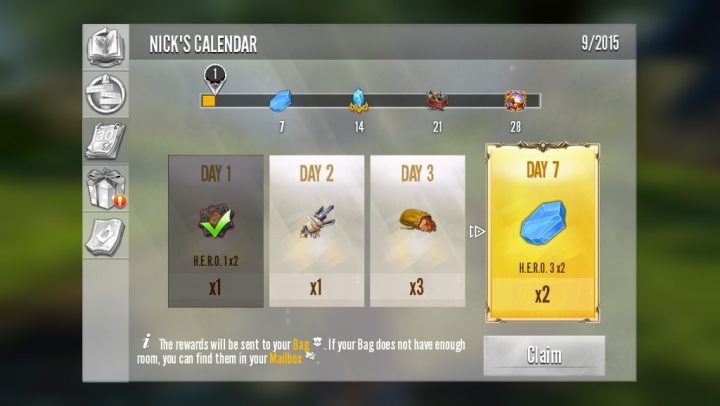 Getting daily rewards for checking in made Dragon Mania Legends absolutely irresistible to us. Order & Chaos 2 makes use of the same mechanic. Log in daily and you get crafting, armor and other extras for simply connecting to Gameloft’s servers. Press the scroll in the top-right corner of your screen to get a look at your pending challenges and rewards. Then press the Gift Box on the left navigation in the pop-up menu to claim your free gift. Tap on the Calendar to claim your free reward.

Order & Chaos 2 also offers up a lottery in case you want to spend your hard-earned coins on gambling for better gear and extras. It’s 1000 in gold for repeated attempts at a big win.

Be Mindful of Your Levels

There’s a lot of content to experience in Order & Chaos 2. Many console RPGs opt to gate that content depending on the character’s different level. This means that new characters won’t have as many tricks and resources at their disposal until they start moving amongst the ranks of higher level players. This is true of Order & Chaos 2.

Level up as fast as you can, because that’s the only way you’re going to experience some of Order & Chaos 2’s most interesting features. Solo Dream quests aren’t available until your character is at least at level 5. Dungeon Mode isn’t available until level 15 at the earliest. Tournaments aren’t something you can participate in with Order & Chaos 2 until you level up past 10. You can’t forge and upgrade your open weapons until level 6. Set a level goal and do as many missions and dailies as you possible can until you reach the level you need to be at. There are no shortcuts to tournaments and Dungeon Mode, you’ll need to do the work the hard way.

Setup Your Pouch & Upgrade Your Gear 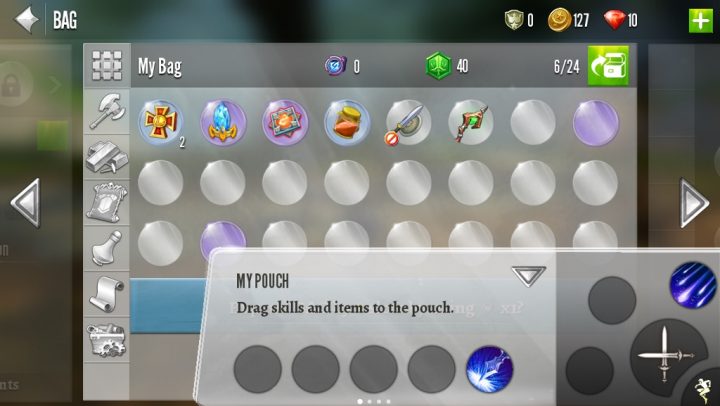 In Order & Chaos 2 you have a bag and a pouch. Anytime you pick something up, whether it be crafting items or a weapon, it goes into your bag. As you pick up no potions, abilities and combat techniques you’ll need to add those to the pouch for quick access.

Add an item from your bag or an ability from your skill try by tapping the green button in the top-right corner of your Bag and Skills menu. When you’re in combat you’ll need to swipe along the bottom edge of your devices display to look at the Pouch and use whatever it contains. Think of the Pouch as a quick access menu, a way to quickly and easily get to things you wouldn’t be able to use otherwise. Before that your Pouch is loaded with all the right abilities and extras before you go into a fight.

You also want to be sure to level up your character’s weapons at a pretty steady clip. Gear can be gathered and fused together so that they have a bigger impact on your combat experience. 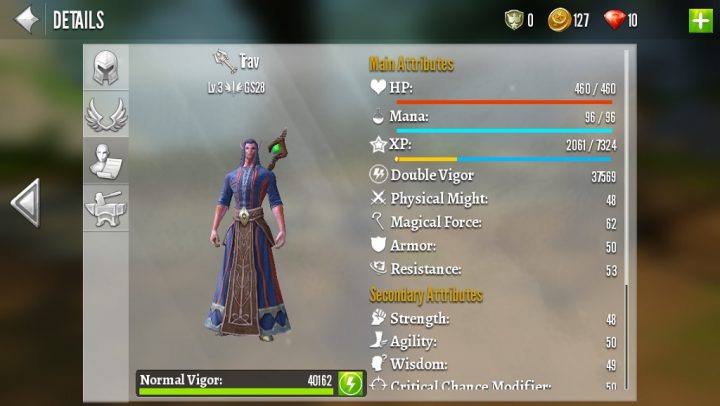 A least of your character’s basic attributes are available by tapping the button on the left edge of your screen and swiping over to the last panel of information available. Health, Mana, Vigor, Magical Force, Armor, Strength and Agility are all things you can see there. As you level up in the game you’ll get and create items that can have big effects on these statistics. Keep an eye out for any opportunity to improve your character’s stats.

The World of Order & Chaos 2 is Vast. Use the Map 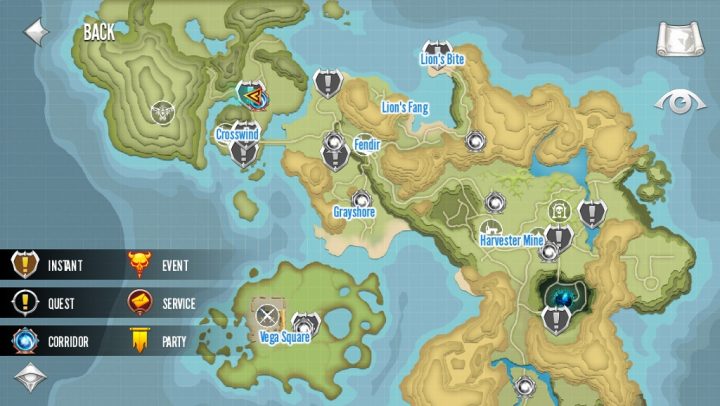 It took me a bit before I realized there was a map for Order & Chaos 2 available at my finger tips. Don’t make that mistake. As you do more quests and improve your character you’ll unlock new areas to explore. Tap on the compass in the top-left corner of your screen to get a better idea of where you are and just how many areas there really are around you. Use both fingers to zoom in and out.

Tap on the legend in the bottom-left corner of your screen to get a breakdown of events, quests, places you should visit and parties.

Use Both Fingers for Granular Control 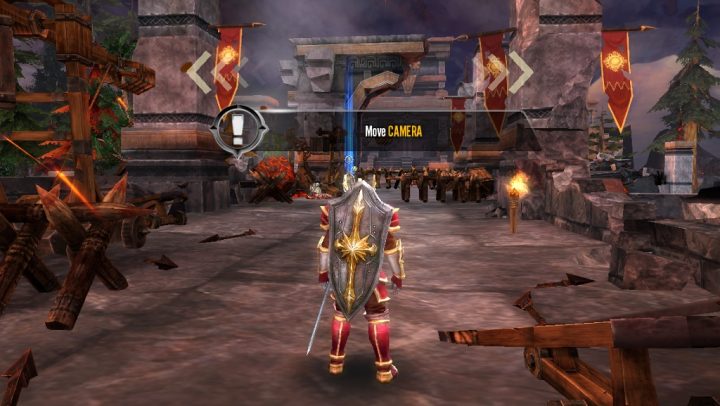 Order & Chaos 2 has a perfect navigation system for those who like to peck at their screens. Tap anywhere and your character will move there. This served me pretty well early on, but as I got hunted down by a back of bears I needed something more granular. Order & Chaos 2 provided.

If you use two fingers on the screen at the same time, Order & Chaos 2 perfectly duplicated the experience of a physical controller with two joysticks. One finger will let you move the camera around in the other direction. The other lets you quickly move your character. This system is great for when you’re running from attackers and need to make it harder for the hits to reach you. Don’t hesitate to use the jump button in the bottom right of the screen either. In place jumps will allow you to do back flips. Moving jumps let you quickly get out of the way.

Good luck with Order & Chaos 2. It’s a huge game, with tons of things to do, plenty of story and lots of encounters. It’s a bit complicated, but with these tips you’ll and some hard work you’ll make it through.