Although Apple’s CEO Steve Jobs has shunned the idea of a 7-inch tablet form factor, noting that the display size was too small to do much useful work, the Cupertino, California iPad-maker is, however, said to be experimenting with tablets with a smaller form factor. Hot off of the rumor mill is speculation that Apple may be committing itself to a 6-inch slate, which would be an inch smaller than some popular tablets with a 7-inch form factor including the BlackBerry PlayBook and Android slates like the Samsung Galaxy Tab, the Dell Streak 7, Nook Color and others. 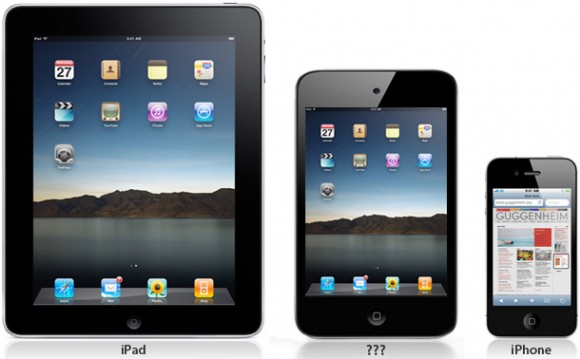 To be precise, Apple’s tablet display size would clock in at just under 6 inches, with a 5.7-inch screen when measured diagonally. The current iPad has a screen that measures 9.7 inches in comparison.

The smaller screen size may help Apple position its new nano-sized tablet, or super-sized iPod as a gaming device to compete with more portable consoles like Sony’s upcoming NGP PSP 2 or the Nintendo handheld systems.

Users who are hopeful of adopting this model should be warned that even if Apple is actively working on this model’s form factor, the company may actually never release the tablet. Apple is known to build and toy around with various prototypes that never make it to a consumer release, unfortunately, as models, products, and variations must meet the company’s stringent standards for build quality, design, usability, and carry a high user experience. If this sub-6-inch model makes it to the market, it may launch in the Fall time frame.

In the Fall, Apple holds a press event historically for its music showcase, which would see iPod announcements and iTunes updates. It’s unclear if the Mini-Me sized iPad would be part of this historic iPod-centric event or if the device’s reported announcement date would warrant a separate event. Either way, Apple may utilize this time frame to ramp up adoption in time for the Holiday shopping season.

If the device’s timed announcement does align with the iPod-centric event, it could signify Apple’s further push into the portable music player market (PMP) that’s dominated by its iPod and iPod Touch. The company may be expanding its iPod line up to include a larger display, which would be better for movies, photo viewing, and watching of music videos, which would make sense considering Apple’s partner and rival Samsung is launching its own Galaxy S WiFi 5.0, which itself sports a 5-inch display.

Sources who are privy to the iPad/iPod rumors say that it will take a similar form factor as the iPhone/iPod Touch, and will come with a single home button on the front surface.

Future As an E-Reader in Limbo

While a sub-6-inch screen size would give the iPad Nano or iPod Touch Max a great form factor to consume contents such as e-books, digital magazines, and newspapers, users who adopt this device as a Kindle or Nook Color alternative should be wary. With publishers still angry over Apple’s new subscription policies, and the company insisting on taking a 30% cut off of books sold through third-party ecosystems–like Amazon’s Kindle e-book store, Barnes & Noble’s Nook store, Border’s e-book stores, Kobo, and other digital book store fronts–the iPad as an open e-reader platform is in question. Apple has given these third-party apps that tap into their own storefronts until this Summer to comply with Apple’s App Store policies, which could result in these companies pulling out of the iOS ecosystem or changing their purchasing option as it may be too costly to compete with Apple’s iBookstore if they have to give Apple a 30% commission to play on an iPhone or iPad.

Either way, news of an iPad Nano, for me, comes with mixed emotions. Excitement for the uber-hot, chic, portable design that I’ve come to expect and adore from Cupertino, California that will make it a fantastic digital books and magazine reader that will give me entertainment, music, and game time when I am looking for a quick break is muted by Apple’s iron fist and Stalin-like approach to safe-guard its ecosystem, which prevents me from doing all those things that make this size a great form factor. With the device’s future as an open e-reader outside of iBooks in question, I’ll call this iPad Nano a great gaming tablet, for now, as even its browser is limited thanks to Apple’s war with Adobe on the Flash protocol.

Editor’s Note: iPad Nano, iPod Touch Max, and other naming references here were created by the editor for this story as an official name is not known at this time.

Via: 9to5 Mac via SuperApple.cz