Apple released iOS 5.1 on the same day it announced the new iPad. Since its release iPhone and iPad users have been quick to update their devices to the latest version.

According to David Smith, the developer of Audiobooks for iOS, 63% of all iOS users have adopted iOS 5.1 within 15 days of its release. In Smith’s words “it took iOS just 15 days to get the same percentage of users on the latest OS version as are currently on any single version of Android.” 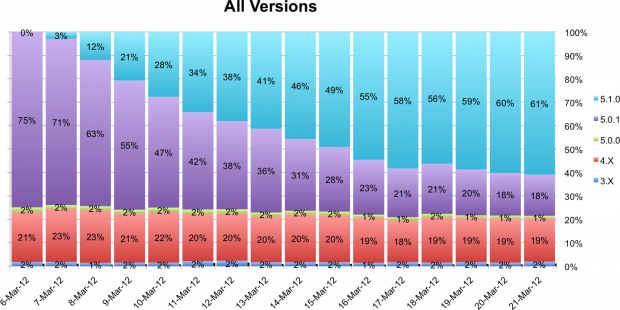 Of course, not every iOS user is able to update to iOS 5.1. Some people are still using old iPhones and old iPod touches that can’t even get iOS 5.0. According to Smith’s data, if you discount those users, the percentage of people who updated to iOS 5.1 is even higher.

The adoption rate for a major OS upgrade is usually relatively slow, so it’s impressive that Apple is able to have so many users on the latest version of iOS.

Developers have cited the varied hardware and different software versions, commonly called fragmentation, as a reason apps come to iOS before Android. Specifically, we’re talking about Instagram for Android.