Samsung is beginning to mass produce its next generation storage chip for mobile devices–smartphones and tablets–that could boost storage capacities six times or more. With Apple’s iPhone topping out at 64 GB along with a number of smartphones, the new chip will allow users to store more photos, videos, apps, data, and files on their devices.

Using three-dimensional vertical NAND (3D V-NAND) storage technology, Samsung is essentially stacking 24 layers of 16 GB chips on top of each other. However, the overall thickness of these stacked chips is not much thicker than existing memory chips on the market today. 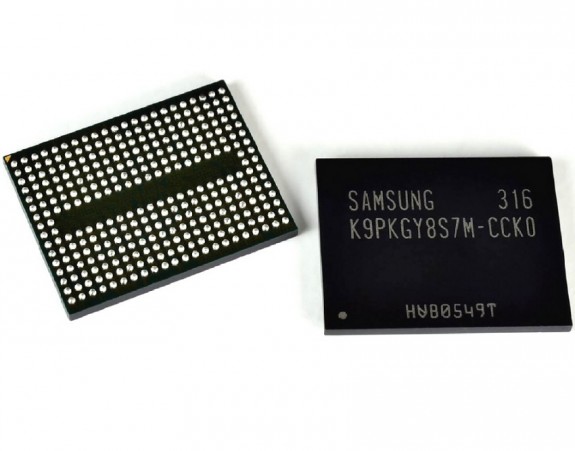 The 3D V-NAND process would allow Samsung to top out at 384 GB capacities, or the equivalent of 6 of Apple’s largest capacity 64 GB iPhone smartphones or 3 of the 128 GB iPad storage. The storage space is also the equivalent of 24 times the space available on today’s 16 GB iPhone 5 model.

When the capacity is maxed out, it is more than what most Ultrabooks on the market offer as many Ultrabook devices, including the MacBook Air, come with either 128 or 256 GB of storage on average, with some cheaper models clocking in at just 64 GB of solid state storage.

The storage may be important as users demand more from their technology. The 41-megapixel Nokia Lumia 1020, for example, stores photos at around 15 MB in size per photo at the full resolution, plus a second photo at a reduced 5-megapixel resolution. Users are also downloading and recording more full 1080p HD movies, and music also take up storage space on smartphones.

On devices like the Lumia where photo processing could take some time given the highly detailed nature of the pictures and the large megapixel count, the faster read and write speeds of the 3D V-NAND solution could allow phones to feel faster as well when saving high resolution photos to storage.

By making this CTF layer three-dimensional, the reliability and speed of the NAND memory have improved sharply. The new 3D V-NAND shows not only an increase of a minimum of 2X to a maximum 10X higher reliability, but also twice the write performance over conventional 10nm-class floating gate NAND flash memory.

This storage solution could potentially make it into the iPad 6, iPhone 6, or even Samsung’s Galaxy S5 smartphone in the future.