Rumors of a shrunken down Microsoft Surface tablet to compete against Apple’s iPad mini and Samsung’s Galaxy Note 8.0 are once again, no pun intended, surfacing on the Internet. According to a report on the Wall Street Journal, the Surface-maker is planning a new lineup of tablets that will go into production later this year, and a 7-inch version is expected to be part of Microsoft’s second-generation tablet portfolio.

Originally, the publication had reported that a 7-inch Windows tablet was not considered last year, but Microsoft realized it needed an answer to popular smaller form factor tablets, like the Nexus 7 from Google. 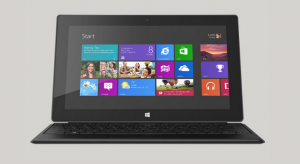 In the past, Microsoft is also rumored to be reducing Windows licensing cost to make it more attractive for hardware partners to hop on the 7-inch Windows tablet form factor.

And given that IDC numbers indicate that as many as half of all tablets shipped in the last quarter of the year bear display sizes smaller than 8-inch, Microsoft may have reason to be concerned.

However, this wouldn’t be the first time that a Windows tablet would ship with a display size as small as or smaller than a 7-inch screen. In the past, Microsoft and its hardware partners tried to promote the UMPC, or ultra-mobile PC, with little success outside of niche markets. those devices relied heavily on a stylus or mouse, and the non-touchscreen optimized interface of older generations of the Windows operating system made the devices inefficient. Moreover, UMPCs were not known for their battery lives.

In an effort to compete against cheaper consumer devices running on Android, Microsoft had changed its focus and is experimenting with new computing choices, including the use of ARM processors, rather than more expensive and powerful Intel CPUs, on its Windows RT system. Windows RT doesn’t have the full power of Windows, is touch-optimized, and comes with a gratis version of the Office productivity suite. It’s preloaded on the Surface RT tablet, and that device is perhaps the closest Windows competitor to the iPad and other high-end Android tablets.

Microsoft is said to be revising its requirements for Windows Blue, including allowing a slightly lower resolution display on the Windows 8 OS to accommodate a smaller screen. This would enable Microsoft and OEM partners to hopefully deliver a full Windows experience in a less expensive package that would be more competitive.