Cult of Mac is passing on the rumor again that a 7″ iPad is being worked on. A 7″ iPad with a retina display is my dream tablet.

Right now the Nook Color can’t display a magazine or a comic book for me without squinting like crazy. The display is limited to being being a 1024 x 600 pixel display with 170 dots per inch (dpi). That means there’s a limit to how good the screen is, and at 170 dpi I’m comfortable reading text, but I can’t see the tiny comic book lettering, or even tinier magazine lettering. I have to pinch and zoom constantly. And because the Nook color has a slightly slower 800MHZ ARM chip, pinching and zooming isn’t as snappy as it is on meatier tablets. 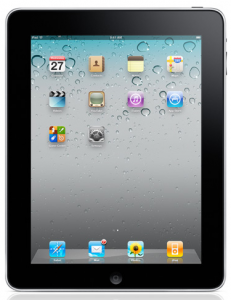 I read a ton of comics and have transferred all my magazine subscriptions (via the app Zinio) to my iPad. They look great on the 10″ iPad, but it’s large. It’s extremely light for where we are in technology and compared to other tablets, but it’s still heavier than a magazine or comic book. I love my iPad, I get a lot of reading and editing done on it.

I’ll play with the Kindle Fire, but it’s got the same dots per inch as the Nook Color screen, so I now I can’t read full screen comics or magazines on it even though mine hasn’t even shipped yet. It’ll be a great browser/reader (and way more apps than a Nook), but it won’t be a great comics and magazines device.

But a retina display on a 7″ would do the trick. When I went from 170 DPI on my 3.5 inch phone screen to the iPhone 4’s 333 DPI, it made reading vastly easier. It’s like the printed page.

If Apple does it I’ll probably be in line on opening day. And I hate lines. I really do.

Which is why it is actually fairly probable that there are test units at Apple HQ, whether or not they’ll ever come to consumers (plenty of Apple products don’t actually come to be).

But if it does arrive, I’m willing to bet a retina display solves the magazine problem, and makes it a very compelling tablet. The Kindle Fire and the Nook Color are dominating the Android Tablet market. I can’t imagine Apple wants to leave that unchallenged for too long.