In true Apple form, the company isn’t packing in as many features as it can into its latest and greatest smartphone, the iPhone 5S. In fact, Apple CEO Tim Cook, alluded to the company’s very measured way of waiting until technology is ready before introducing it into their devices saying, “We think deeply about experiences we want to create.” Unfortunately the philosophy also ensures that the company’s devices don’t get many of the features of their Android and Windows Phone counterparts. Here are some of the features that Apple’s iPhone 5S is missing.

When highlights first debuted on the HTC One, users marveled at the ability to create digital reels of their favorite memories, without having to upload video to a separate computer. While the iPhone 5S does have some improved camera software and hardware which allows users to capture better photos, Apple completely ignored the growing popularity of video highlights in smartphone software.

The iPhone 5S does have an upgraded camera, however it remains unclear whether any of it’s improvements will be enough to find off the newer camera designs of the Nokia Lumia 1020 and other high-end smartphones.

Ignoring media trends, Apple also choose not to introduce a seriously advanced camera in the iPhone 5S. Meanwhile Nokia’s Lumia 1020 Windows Phone and many the Samsung Galaxy Camera all have ways of enabling photo-capturing features that no one other than someone using a point-and-shoot camera would expect.

With this update, Apple also seems dead-set on ignoring the larger screen sizes that many manufacturers are beginning to use in other flagship smartphones. It wasn’t unusual for Apple to ignore trends in screen size, the company only introduced a larger iPhone screen with the iPhone 5. Still, the company is putting itself in a position where it’ll likely have to add new screen sizes to the mix at some point in the future.

Although the iPhone 5S comes in a new color, it’s design is exactly the same as the iPhone 5, so too is it’s display size.

Since Apple introduced the iPhone 5 last year, users were not expecting a significantly update with this phone’s design, and Apple didn’t throw them a wild card. Although its new fingerprint reader/home button design is completely different from devices that proceeded it, that’s the only major difference in form. There are some new color options.

No Simultaneous Data and Voice

Even though users have complained about it since the iPhone was first introduced to Verizon, users on that carrier still won’t be able to browse the internet using Safari and talk on the phone at the same time. Apple hasn’t addressed this issue in the iPhone 5S at all. 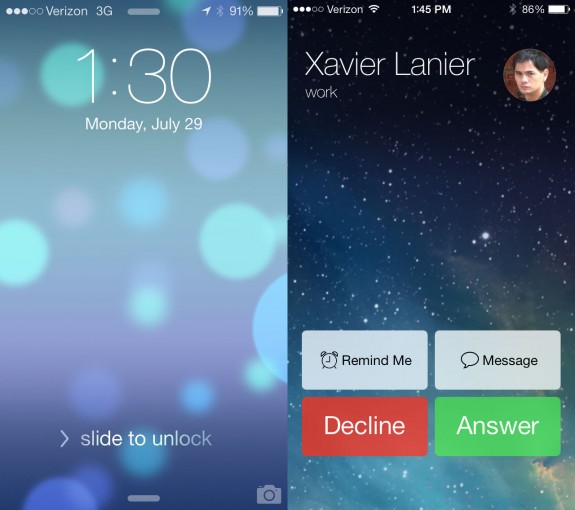 Though the company has worked hard to upgrade the design and feel of iOS 7 including the calling application, users on Verizon still won’t be able to browse the internet and answer calls at the same time.

Just a week after the Samsung introduced Galaxy Gear at IFA 2013, the company hasn’t announced any companion devices for it. In a world where smartwatches and Google Glass are gaining momentum, many had hoped that Apple would deliver a companion experiences of its own. After all, rumors of an iWatch are spreading like wild-fire. Sadly, the company didn’t announce anything on that front, except that its latest devices would support the Bluetooth 4.0 standard that devices like the Nike+ wrist watches do.

The iPhone 5S doesn’t feature any sort of near-field communications technology, with Apple seemingly happy with its new AirDrop and Bluetooth transfer technology. Meanwhile, NFC technology is finally catching on. More devices than ever include the technology, and many retailers are starting to support it. The technology would be a huge boon for the Passbook application included in the iOS 7, but it looks like users will have to wait another year to see if Apple includes the technology. By adding NFC, Apple would be able to allow its users to transfer information and process transactions without ever having to pull out their wallet.

By most accounts the iPhone 5S is a pretty forward-thinking device. It beefs up security for users with a new fingerprint reader behind its home button, and it even comes equipped with an 8 megapixel rear-facing camera for capturing amazing photographs.

Apple’s philosophy of slowly adding new technology to the iPhone is great for end users. It keeps features that just aren’t ready for prime time from taking up storage space on user’s devices and raising the price of each iPhone. It also means that users with Android and Windows Phone devices won’t be switching to the iPhone 5S if they value a few of the features that the device is missing.

The iPhone 5S will go on sale in the United States on September 20th for $199 with a two-year contract.