In San Francisco, California, Sprint had announced that it will be using IBM’s MessageSight solution to power its new Sprint Velocity Service Bus service that auto-makers can adopt for their connected cars of the future. The Sprint Velocity Service Bus promises some exciting ways to stay connected with your vehicle, save time and gas, and stay safe while on the road.

In an age where mobile phones dominate the conversation, Sprint is leveraging its wireless expertise and bringing it to cars. The nation’s third largest wireless company and an active player in the embedded machine-to-machine space says that the solution will be beneficial for both auto-makers and for consumers.

Here are seven ways how Sprint Velocity Service Bus will make your lives better in your car. 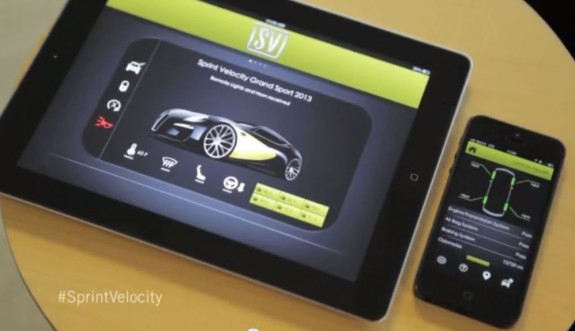 For example, through wireless connectivity and sensors, your car can tell you that it needs service. However, a smarter, connected car will not only tell you to take it into the dealer for maintenance, but can alert you of what the specific diagnosis is, dial into the dealer to let them know what parts to order for the needed repair, and may even give you additional information about the problems your vehicle has so you know whether it’s safe to still drive or to immediately pull over.

This will help save users time, help prepare them for repair, and provide remote vehicle health and monitoring similar to what medical gadgets that connect to smartphones allow people to do for their own personal health and well-being.

The alerts can either be shown on a user’s smartphone or on the dash unit.

Car manufacturers can benefit as well by delivering a better driving experience by alerting customers to potential maintenance, problems, and issues before they become major problems. If your car has low oil, the car can not only alert you to the problem, but can tell your the directions to the nearest lube center.

This will be important to auto-makers in delivering unique experiences inside their car, but ones that are smarter and add connectivity.

2. Preferred Settings Wherever You Go 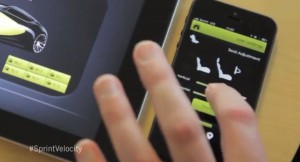 Another application that’s useful for families with multiple cars is the ability to set and save their preferred cabin settings. For example, if I adjust my cabin temperature, seat, and steering wheel position on one car, when I hop into my wife’s or my father’s cars (both must be powered by Sprint Velicty Service Bus) I can quickly import my preferred settings to those vehicles as if they were my own. It’s a nice touch that saves time and helps to personalize any car on the fly. For a person who loves roadtrips and rents a lot of cars for the summer, I know I will appreciate in making my rentals feel more like “home” by being able to bring my favorite settings with me, from radio stations to seats, from climate controls to steering wheel positioning.

Users can also use Sprint Velocity in a way that’s similar to General Motor’s OnStar service. Sprint will offer remote start and remote lock of the vehicle. Unlike some competitive models on the market today, there is little to no latency on remotely starting or locking your vehicle with Sprint Velocity. Based on IBM’s MessageSight system, a new Message Queuing Telemtry Transport protocol is used that’s much quicker than the slower HTTP protocol.

This way, when you’re logging onto your smartphone and trying to start your car from inside the house, your car will start right away. In the past, with a few other systems, including OnStar and Viper, there could be a delay of anywhere between a few seconds to as long as a minute.

The way this works, according to Sprint’s Bob Johnson, who heads development for Velocity, is that rather than having to fully power up the head unit–the car’s computer–to just start or unlock the car, a lower power saving state can be employed so that only the necessary telematic components will need to be powered on. This leads to a faster response time and reduced latency. Additionally, the system can always be on, similar to a smartphone, in a lower power state so that it could receive updates.

4. OTA Updates for Your Car, Wirelessly

Sprint says that it envisions updates could be delivered over-the-air to consumers in the future, but that’s up to the discretion of auto-makers. In some private conversations with some Detroit car companies, I found out that manufacturers could theoretically deliver OTA updates to users, like on a smartphone, if it fixes existing problems whereas if the updates delivered new features, existing laws require the users to take the vehicle into the dealer. Additionally, as updates may “brick” the car as they do a phone, manufacturers are opting with the more conservative bring it into the dealer route for now.

IBM says that it has been working with Ford in testing MessageSight, so the potential is there for Sprint Velocity to help power Ford Sync in the future. Velocity is also the platform that drive’s Chrysler’s Uconnect Access and is currently on the market today. Service Bus will allow other auto-makers to add various parts of Velocity service to their existing in-dash experience.

The system can also help users locate their cars and the best part about smartphone integration and the Sprint Velocity Service Bus is that you can send an address from your phone to the car so you don’t have to enter it in the car when you get in. You’ll have the address ready to go.

Remote locate can also help reduce or prevent car thefts as well in addition to being a useful tool for absentminded drivers who can’t remember where they parked at the airport after returning home from a long business trip.

6. Sending Address From Your Phone 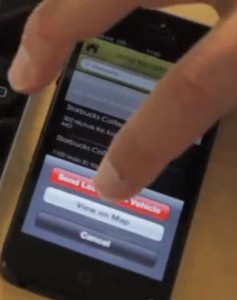 Johnson says that the feature to send an address to the car will be integrated with the car’s existing GPS software, and that Sprint won’t be providing mapping software for that in the car separately. It’s similar to what Apple is doing with Apple Maps in iOS 7 in the Car to make it convenient for users to research destinations on their phones and seamlessly send it to their cars when they are ready.

Because the Sprint Velocity Service Bus is connected over a 3G or 4G network and is integrated with location data, it could also provide users with optimal traffic and navigation guidance. Based on current traffic, historic traffic data, and time of day, the car can connect to the cloud to pull the best routes for navigation. This can help reduce emissions, save gas, and save commuting time for users.

Additionally, according to Johnson, we should begin seeing Sprint Velocity Service Bus integrated into cars as early as 2015. Sprint says that it is in active discussions with various auto-makers right now.

For the car-makers, Sprint can help them connect to apps and APIs without much work. Take for example the streaming Pandora app. Rather than having car-makers build the app, the UI and framework, and integrate to Pandora’s APIs and SDKs for the car, Sprint can do all that on the backend and car-makers can just tap the Velocity Service Bus.

The potential is there for future apps and applications, and it will be exciting to see how cars can leverage connectivity to deliver meaningful, safe experiences to drivers. “Users love their smartphones, and they want to continue to use their smartphones uninterrupted,” Sprint’s Nina Kim told me. “Sprint Velocity Service Bus allows users to do just that in a safe way.”

The Bad News: Not Coming to Existing Cars

The only bad news is that Sprint says this service is only available for new cars, so we won’t see aftermarket plugins for older vehicles for those who aren’t ready to upgrade to a 2015 model car. That means you’ll have to rely on your favorite auto-maker to implement Service Bus themselves, so if you want Sprint Velocity you should start lobbying your favorite car manufacturers today.

Pricing will vary. When I asked about what sort of price premium Sprint Velocity Service Bus would add to a car’s existing cost, Johnson and his team told me that auto-makers can choose a number of different pricing models. Manufacturers can absorb the cost of the hardware and service into the car or they can charge a subscription fee, similar to GM’s OnStar.

Sprint did not reveal how much the equipment will cost manufacturers to implement into the car.